Some of you may know that upon Kristin’s departure from upstate New York to come get me in Boston, Gerty stubbed one of her big toes on a sedan. She now has some new shoes and some laces and we’re considering some physical therapy on her ankle. Nonetheless everyone is fine and Gerty is a trooper. Kristin and I spent that week in Boston making sure to visit our Boston hometown faves before heading back to NY with all that’s left of my possessions to get Gerty ready for the open road! (We’ll be posting looks at restaurants in Boston very soon. We have about 9 or 10 to share with you. Places like The Red Lentil, Peace o’ Pie, Veggie Galaxy and True Bistro to name a few. Get ready!)

So here we are in Kristin’s hometown, running around to various shops gathering all that’s necessary for running mobile businesses from the back of a ’95 Chevy. Let me tell you how spoiled I feel having lived in Boston for the last 11 years. We’ve tried avoiding the big names like Wal-Mart and The Home Despot as much as possible but the small businesses just don’t have what we need or they just don’t exist anymore. On top of the small locally owned places being short on inventory, the big shops are abbreviated versions of what a city boy like myself is used to. So mail order it is. That’s ok. I accept that I am picky and besides,  I am all about supporting the letter/parcel carriers of the good ol’ USA. Speaking of which, I must admit I am hugely distracted while writing this post as I am following my fellow Bostonians on Twitter #OccupyBoston who are standing in support of the working class. Alas, we’re here to show you about Gerty the Activismobile! She’ll definitely be making some appearances at some rallies on this trip for sure.

Gerty started off as a Tiara Motor Coach Chevy Conversion Van back in 1995. Sixteen years later she’s being renovated for a yearlong foray into activism and an experiment in modern entrepreneurialism. I’ve been looking forward to this part. The last I really got my hands dirty was back in 2006 when me and a bunch of friends built New Alliance Audio‘s new studios in Central Sq, Cambridge, MA. Here we go:

First we had to remove the seats and the foldout futon. I think Gerty was initially intended as a day trip kind of gal. With the seats and foldout bench in back, the storage is nearly nonexistent. Not ideal for our trip. We need a place for clothes, food prep items, tools and a deep-cycle rechargeable battery to power our “office” amongst other things. Removing the seats was easy. In fact, they were taken out prior to me ever laying eyes on Gerty. The foldout bench was not so happy to say goodbye. It was one of those situations where you get 50% of the way through and the other half just won’t budge. The manual release bolts on the driver’s side were seized by years of rust. Time to bust out the rotary kit I got from my dad and go to town. Sparks flew and the bench was released. 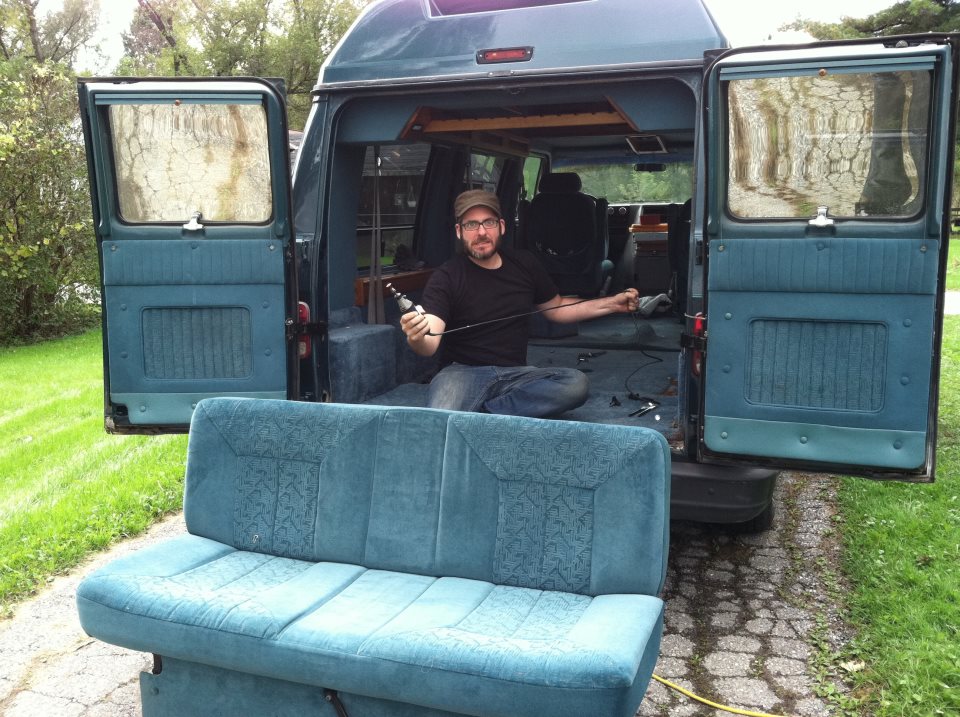 Up next was to clean out all debris and conceptualize the best use of the space. 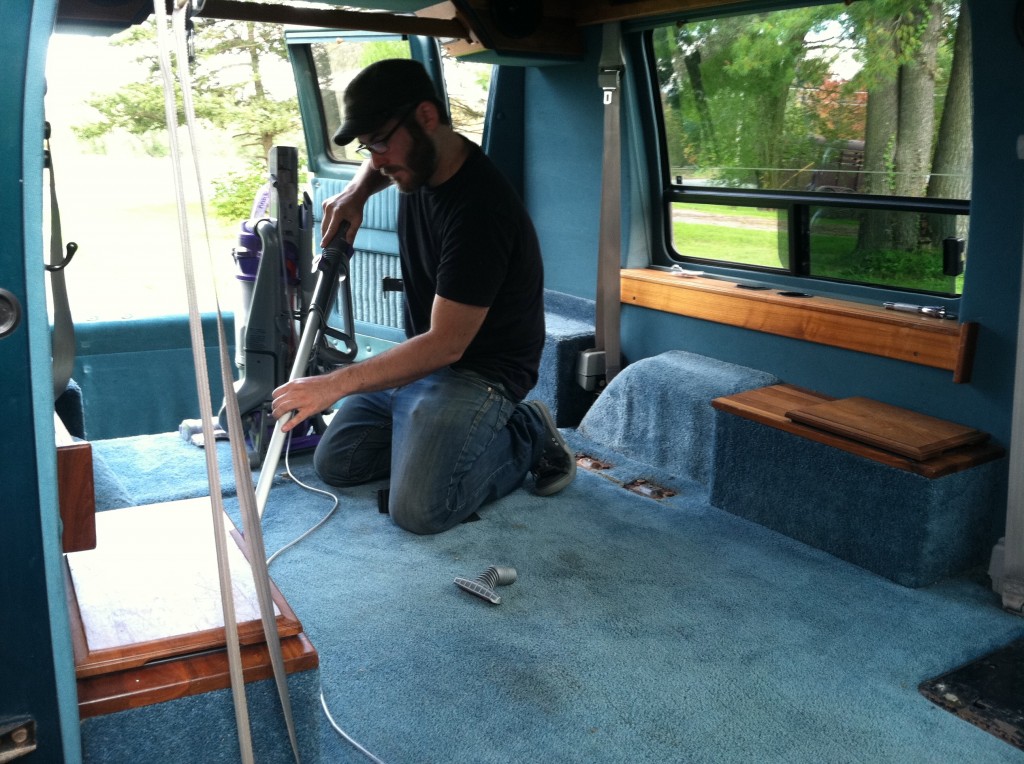 I am a big fan of using the preexisting structure as much as possible. The rear section of the cabin has a ventilation box on the passenger side and a matching box on the rear driver’s. A long board with a cushion to match the foldout bench used to lay across these boxes to extend the bed length. We decided to keep these boxes in use and build our bed and storage off of this height. Time to get cracking! Bring in Dave Lajeunesse, builder extraordinaire to assist. (check out Lajeunesse Builder & Remodeler if you need some work done in the Troy/Albany area) 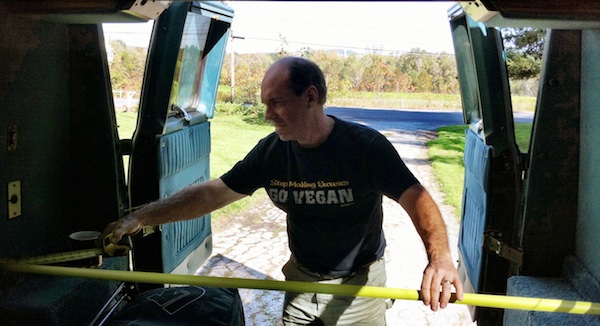 While Kristin’s vegan dad was thinking of ways to build out the storage, I was busy finding a place to put the big rechargeable battery. In the middle of the cabin, in front of each wheel well, were two little cooler boxes, another indicator of the day trip vibe the original designers were intending. Out with those! Let’s repurpose those thangs… See here: 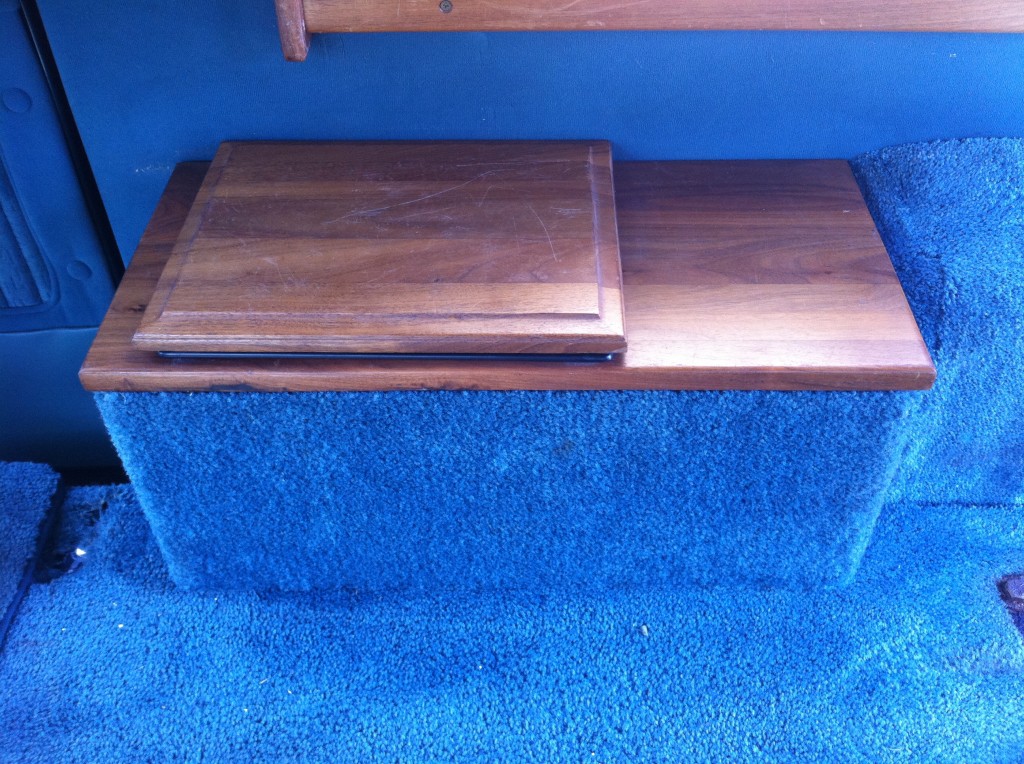 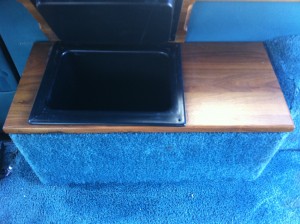 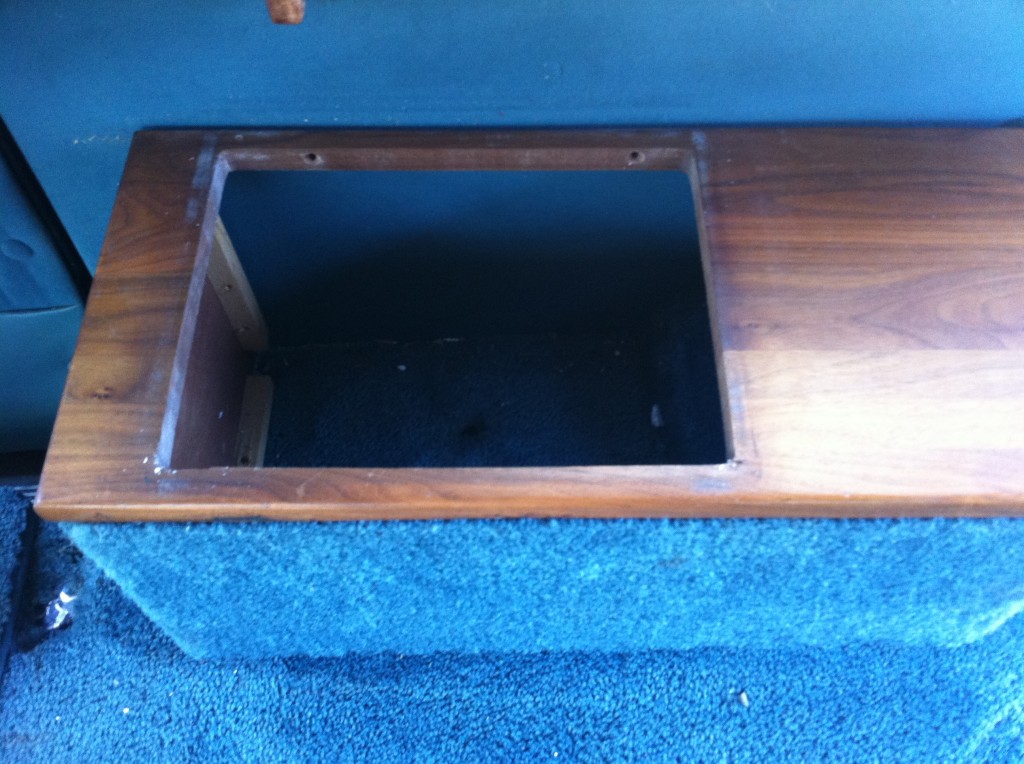 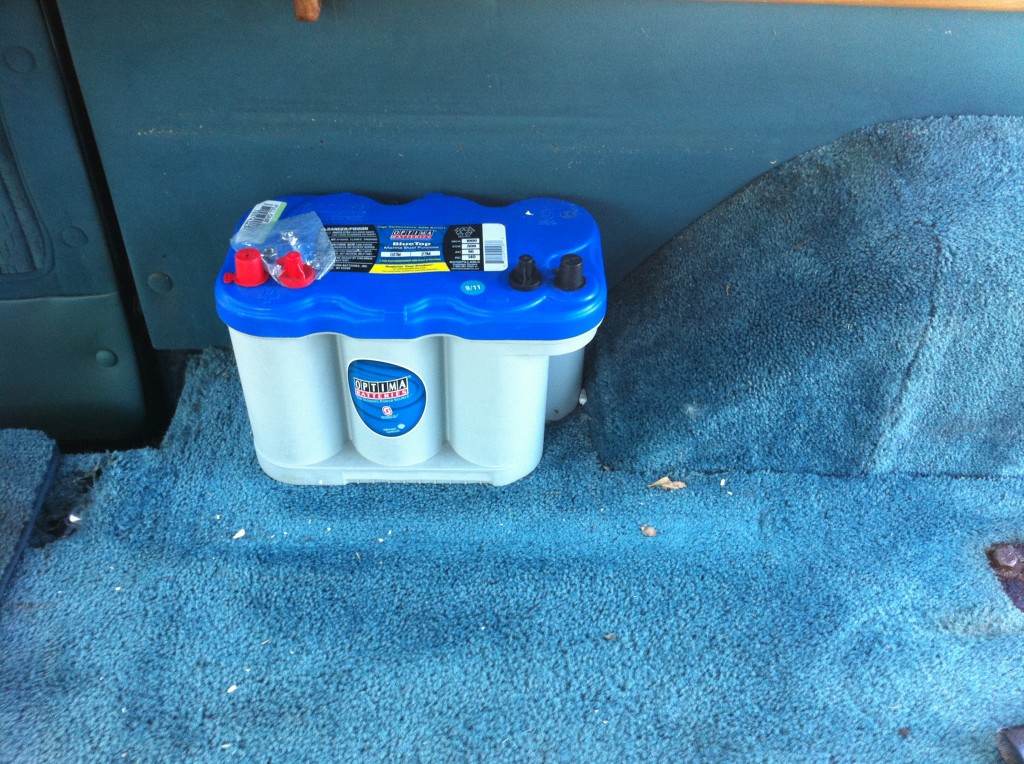 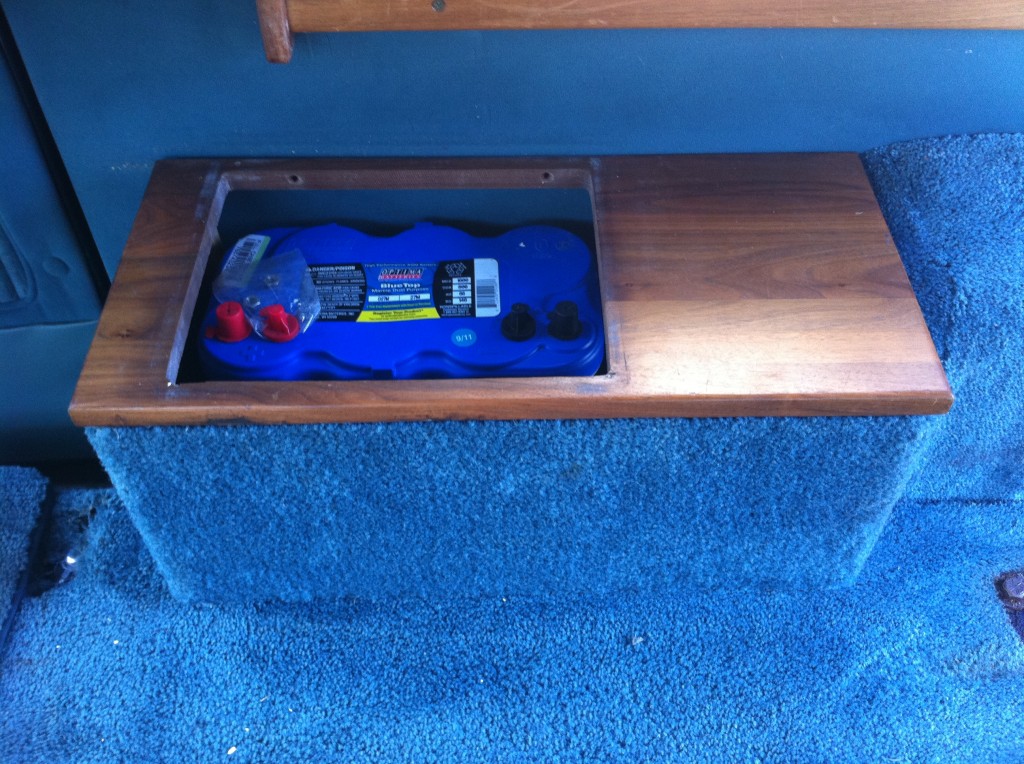 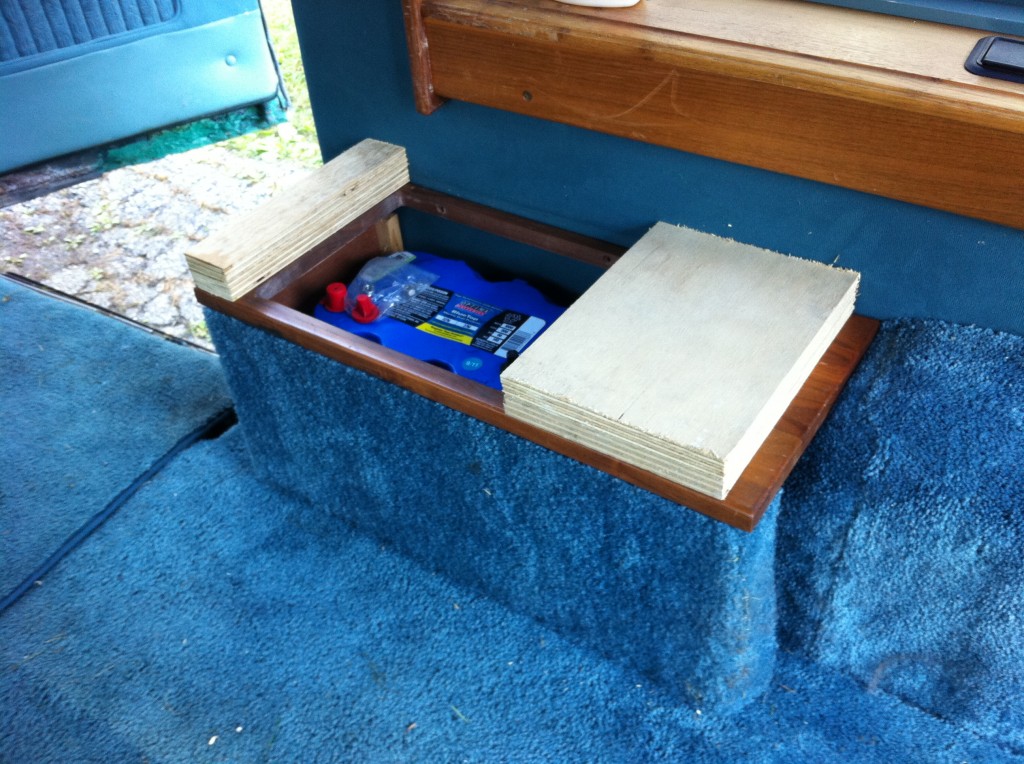 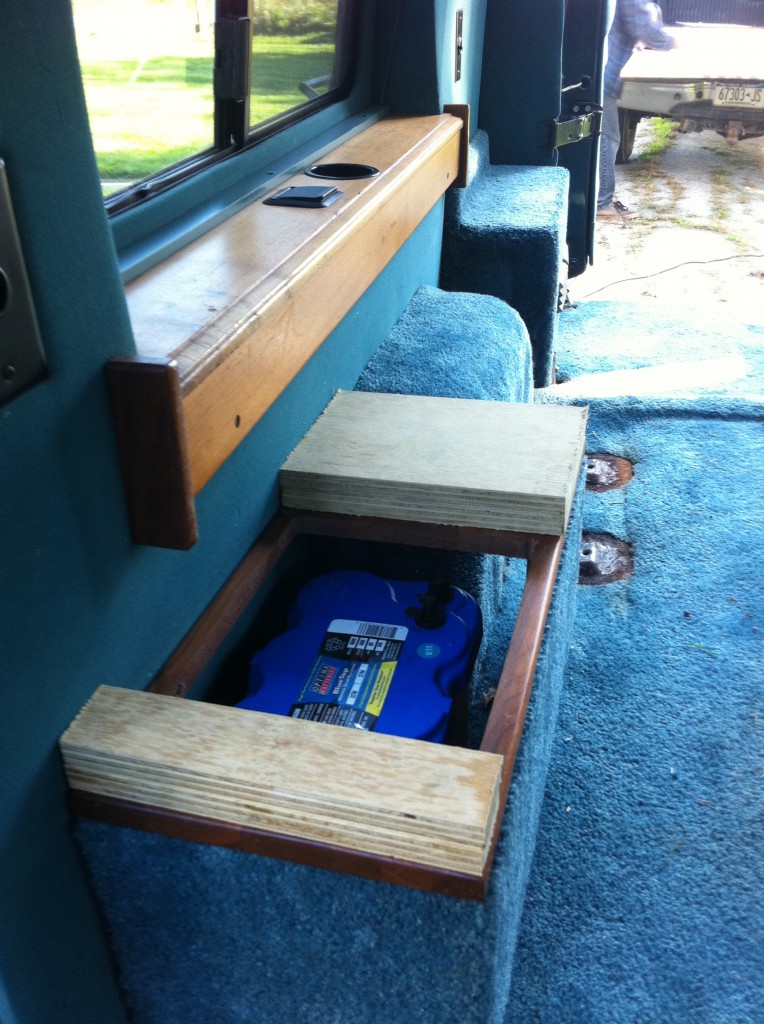 Up next we start building the below bed storage! 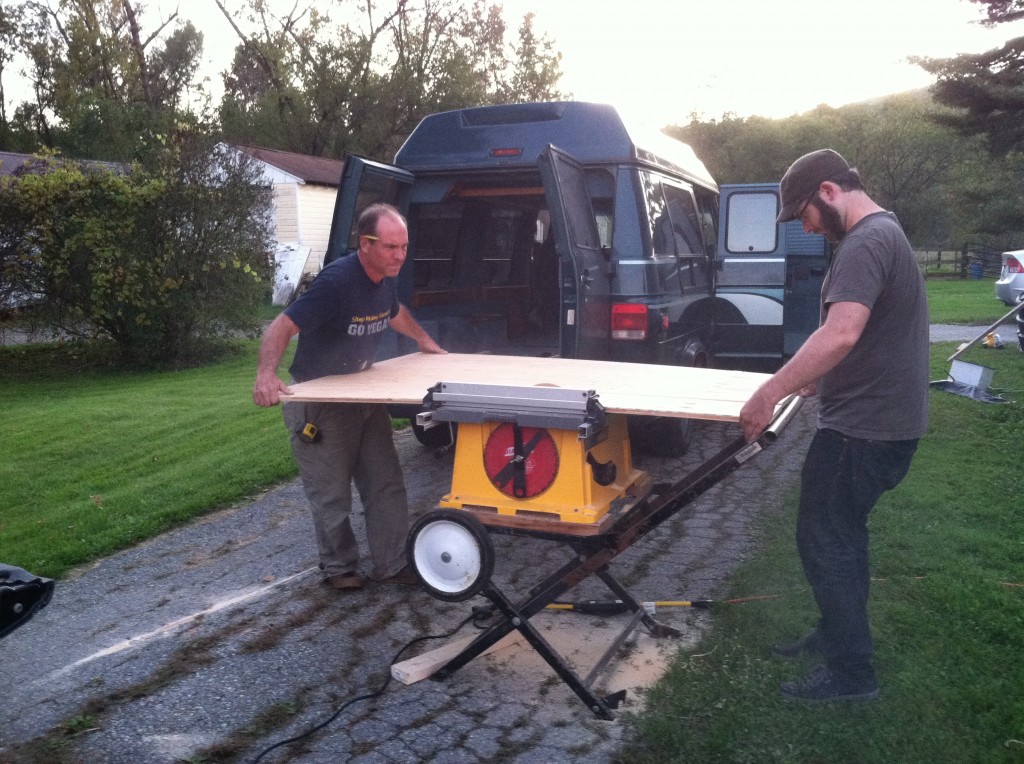 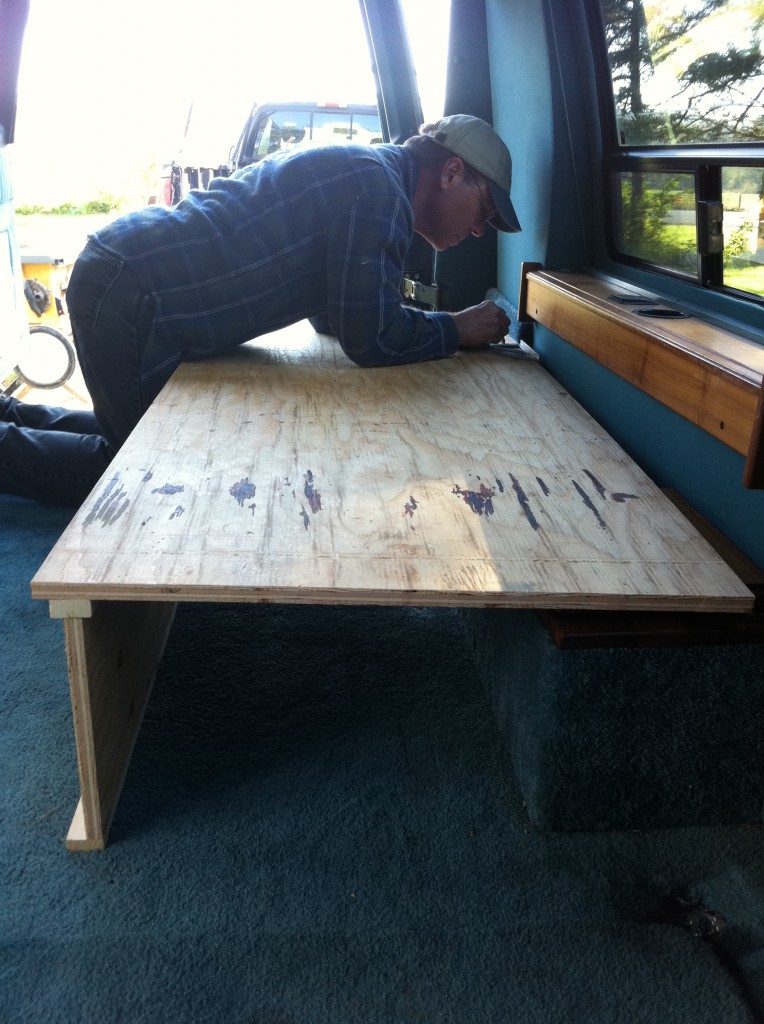 Looks like there is a notch to be made. 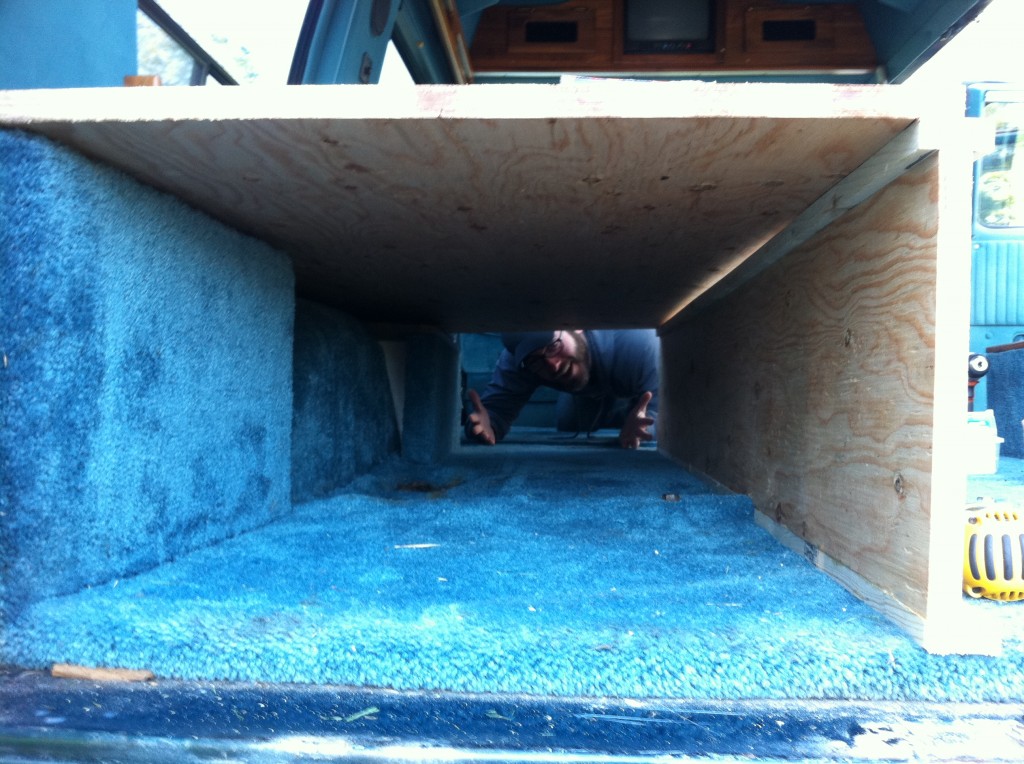 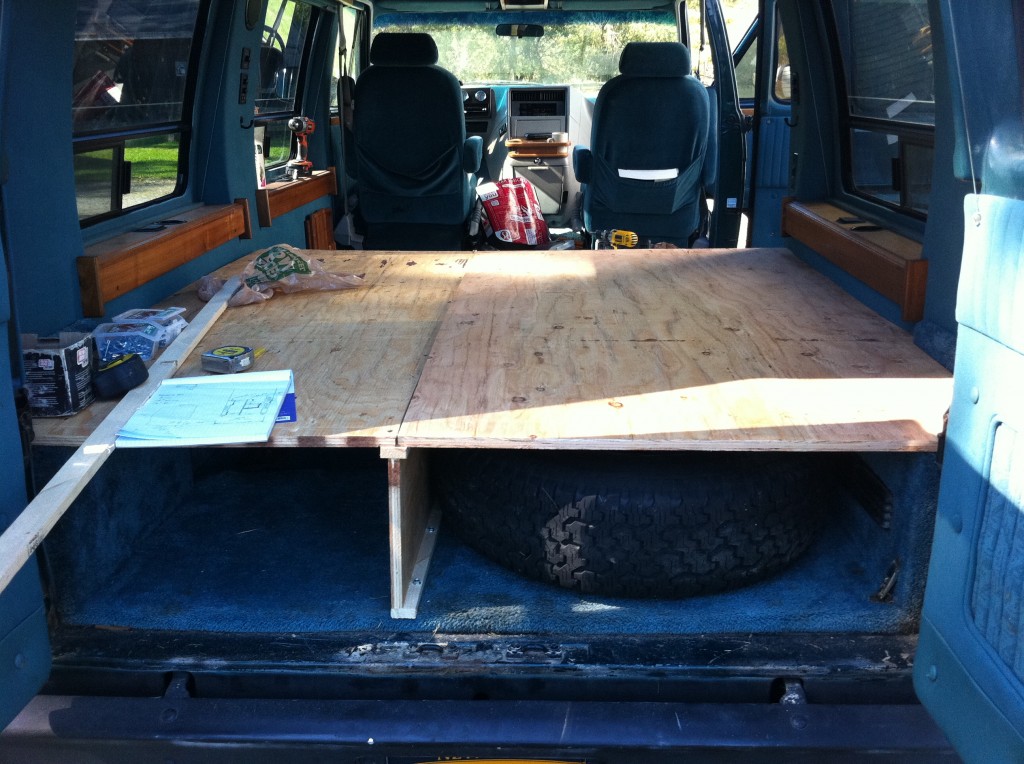 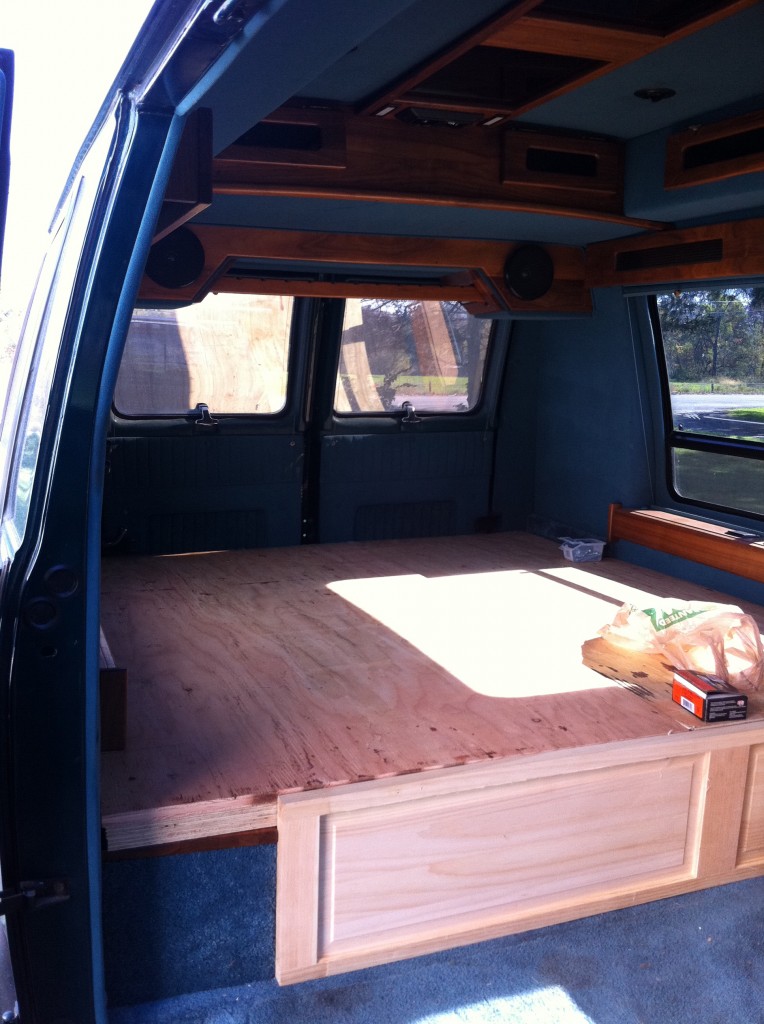 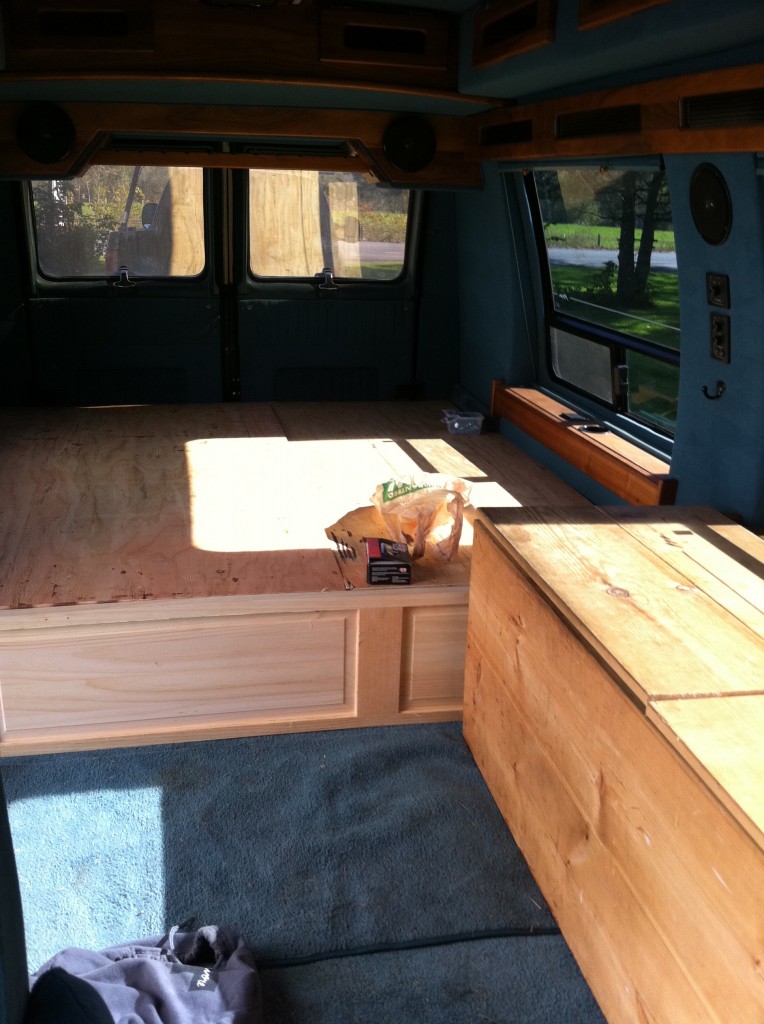 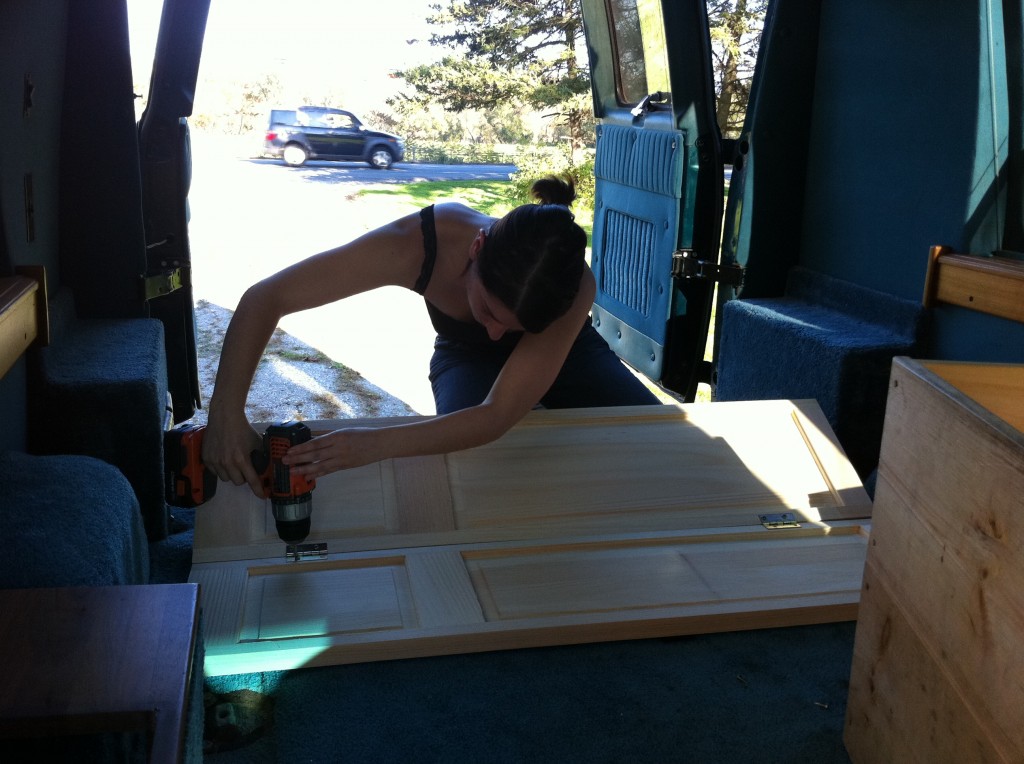 Kristin’s repurposing the hinges on this cabinet door!
Reduce, Reuse, Recycle!
Well, we’ve still got some work to do on Gerty before she’s ready but we are oh so close! More to come! For now here’s a picture of Gerty hanging out with my bike Freyja. Freyja is a Swobo Folsom single speed with a coaster brake. Not a speedy ride but a fun cruiser fo’ sho’. Freyja is Old Norse for “lady” and was also the name of a Norse goddess associated with love and witchcraft amongst other things. Look her up.  http://en.wikipedia.org/wiki/Freyja 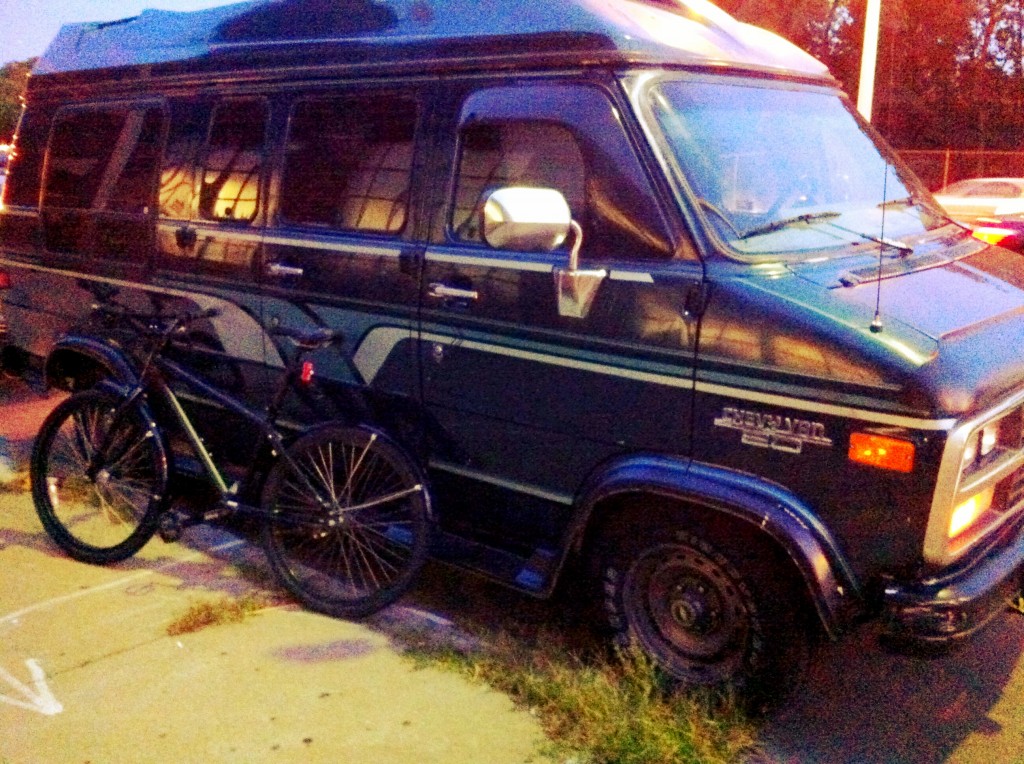 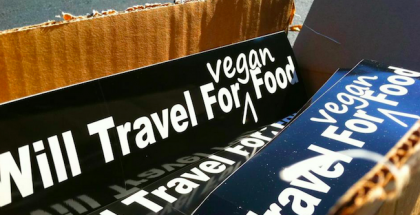 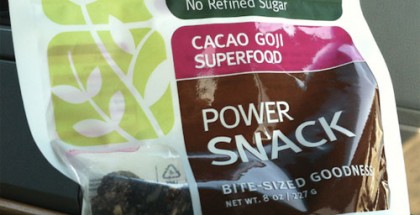