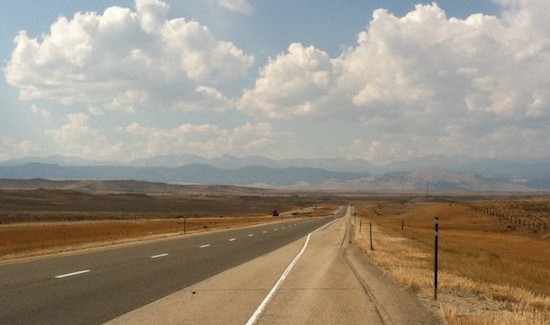 Today has been long and tiring. But great too! :)

What started out as a six hour drive to Yellowstone National Park turned into a nine-ish hour drive to Cody, WY (just outside of the Park).

Most of the drive was absolutely glorious. The weather was downright perfect, slightly cool but sunny, clear skies. And the view was unbelievably breathtaking. The first few hours were flat and straight roads with magnificent mountains surrounding me on all sides. When I crossed over into Wyoming I actually shouted out loud, “I’m in Wyomiiinnnnnggg!!!” I think it was accompanied by a short, improvised jingle and a little seated jig, and then some near-tears as I was overwhelmed with the awesomeness that is this adventure and these beautiful landscapes that I’d never seen in person before.

Another thing I realized that I’ve never seen in person are the large, never ending, oil fields. I passed by giant oil reservoirs sprawling across countless acres of land. It made me sad to see them all.

Upon seeing several signs about the safer and more scenic route to Yellowstone, I got off the thruway at exit 58 and landed in a small town where I filled up on gas and used the potty. A more scenic route you say? Oh yes, yes please!

I hit route 16a not having a clue just how mountainous the drive would be. The natural beauty of these mountainsides is practically indescribable. Colors of the rocks, mountain, and foliage ranged from oranges, yellows, various shades of green, grey, and even pinks. Sometimes the formations would look like perfectly etched stone, evenly leveled plains, or movie sets straight out of Lord of The Rings. 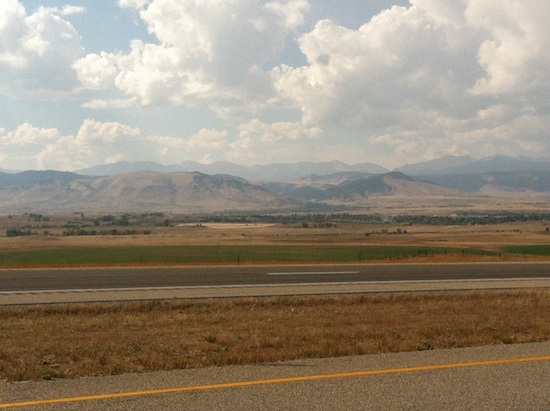 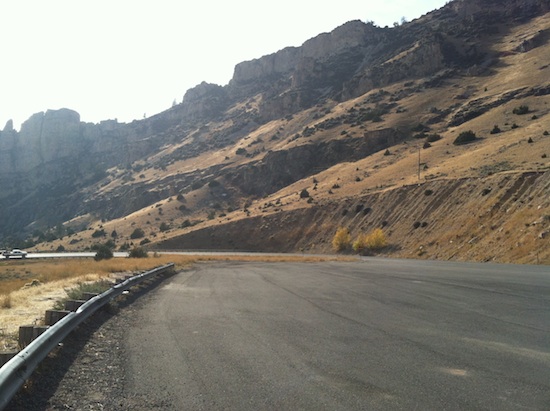 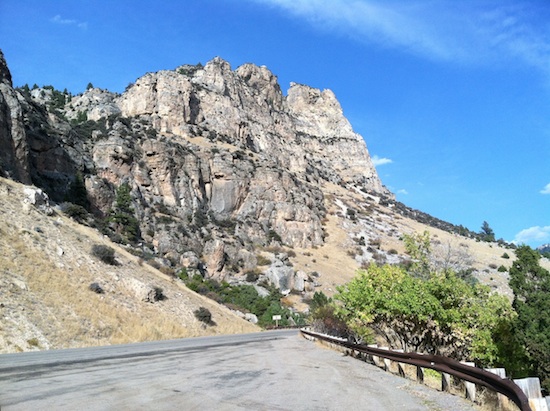 My attention was torn between the sights just outside the windows and a new smell emerging from Gerty’s front end. I knew it immediately. The engine! Here I am driving alone in the middle of what feels like nowhere and I’m sweating over losing Gerty as the sun sets. But I insisted on being positive!

I had to do some serious talking to both myself and to the van in order to so. I recognized the smell as possible engine overheating, so I cranked up the heat and then, with spotty cell phone service, I texted my dad to be sure this was the best to do for now. I still had fifty plus miles ahead of me, incredibly windy, steep gradient roads, and so many amazing things to see that it was all-in-all a bit overwhelming. But I kept it together. I also stopped a half dozen times or so to take pictures and used these stops to let the van cool down. My, what beauty nature yields. 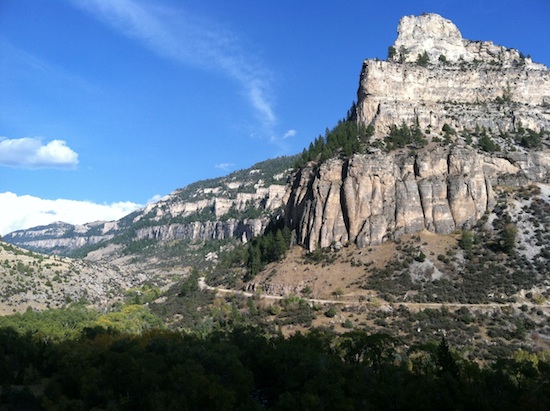 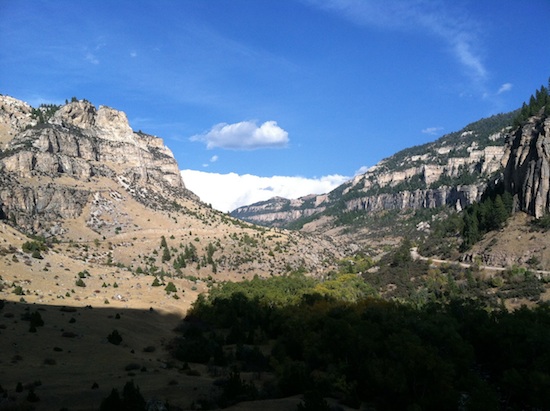 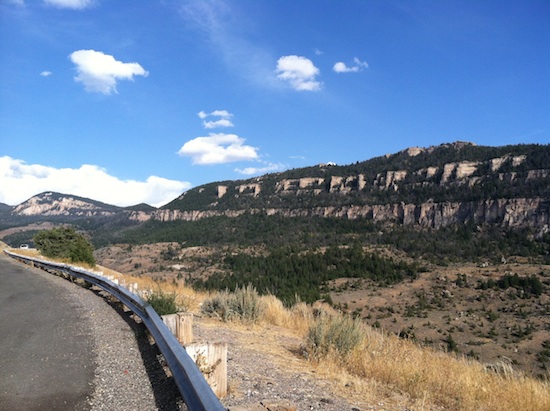 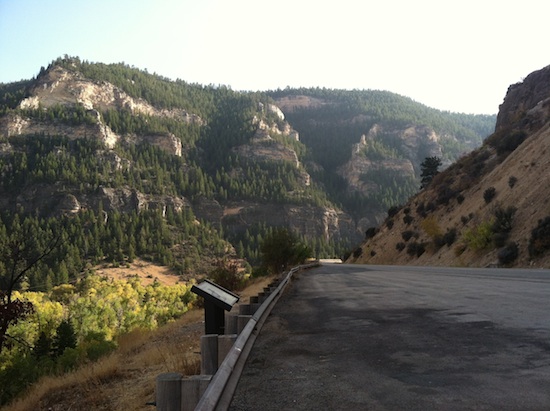 The only real downside to turning the heat on was that the van emits a TON of hot, hot, hot air directly above the driver’s right foot. I was wearing sandals so my feet were just burning up. I turned the heat down, then off, then back on, then on low, then on high, and so on. Ha. Finally, after a few more hours, I reached flat ground once again. 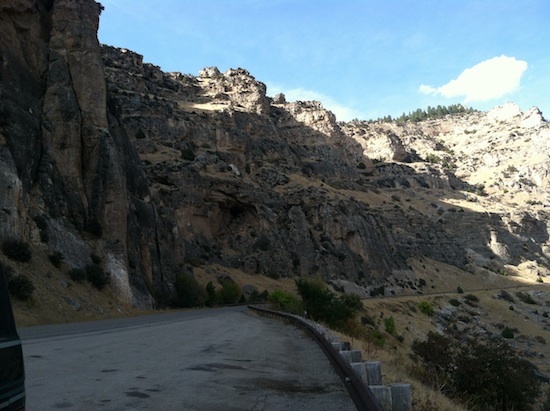 I was feeling pretty hungry even though I had snacked on some of the left over guac and chips, and an apple earlier in the day. A quick Happy Cow search brought up a nearby health food store called Don’t Worry, Bee Healthy. They were closing at 5:30 and it was 5:26. I knew this might be my last chance at some vegan noms before getting back on the road. It was a relief to learn that they were less than a half mile away. I ran over and snuck in just at 5:30. The woman who was working encouraged me to take my time, said she was in no rush. Phew! I found some Lara bars, Luna bars, and Primal Strips. Nice! They also carry a bunch of bulk foods, gluten-free stuffs, and frozen vegan foods.

As I checked out I asked the woman if she knew of any restaurants between there and Yellowstone that have veg options. She named a couple in Cody, WY and also noted that there are a few natural/health food stores in that same town. She was so nice and mentioned that she’s vegetarian. How cool! A vegetarian in Wyoming! They do exist! ;) I thanked her for the help, checked out, and then went to a gas station to fill up. Just before I hit the road I checked my email and the woman from Don’t Worry, Bee Healthy had already sent me a message with another restaurant recommendation in Cody. So awesome! I now know that her name is Amanda.

Amanda, thank you so much for your help and for being a rock star veg in a not-so-veg-friendly area. Work it! Work it!

The van had time to cool down, was feeling better, I had some snacks, and was ready to make my way to Cody, WY. I wasn’t prepared to arrive at Yellowstone in the dark so I figured I’d find a place to park overnight in Cody. Just as I was leaving Greybull I noticed flashing lights behind me. Nooooo! I pulled over and sure enough, they were for me. The police officer informed me that I was going 43 in a 30, that despite being able to SEE the 45mph speed limit sign just across the bridge, the speed limit does not in fact change until I’m at the sign. TICKET. Booooo.

It was bound to happen though, I guess. I did get an almost-ticket outside of Minneapolis a few months ago. I knew I was speeding that time but got off with a warning. This time I didn’t realize I was speeding (I thought I was actually paying excellent attention to the speed limits in these small towns — one of which has a population of 25, according to the road sign). But sure enough – I give you, the first speeding ticket of the road trip! Dah dah daaaaaaahhhh! 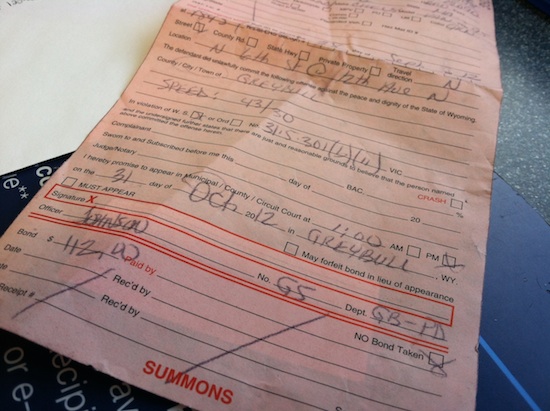 After that the driving was relatively easy. It was made up of completely straight and flat roads for fifty miles until I reached Cody. I don’t know why but I was counting every single mile after I got  pulled over. Checking my speed, checking the mileage, checking my speed, checking the mileage. I think I was just done driving at this point. It was getting dark and starting to rain when I still had about twenty miles to go. I also saw another first: what appeared to be an isolated forrest fire. Bright, bright orange and yellow shooting from the top of a section of trees several miles away, with gigantic billowing clouds of smoke. When it first caught my attention I actually wasn’t sure if I should turn around. There was only one other car on the road and it was behind me. A few cars did pass me, going the opposite way but none of them seemed to be suggesting we turn around. So I kept going and eventually passed the blaze. Crazy stuff.

Now, I’m in Cody, WY “camped” out in a Walmart parking lot. The major different between this Walmart and the dozens of others I’ve parked at is that this one has a handful of others parked along with me. There are a few campers, RVs, and vans that look like Gerty. It’s kind of cool to see after you’ve spent most Walmart parking lot nights wondering if someone is going to knock on your door and tell you to leave.

In the morning I’ll set out for Yellowstone after visiting the health food store here. The Park is only another fifty miles or so from here. Phew!

After I explore the Park I’m heading to Missoula, MT where I’ll pick up my mom from the airport on Sunday. Woohoo!! :) 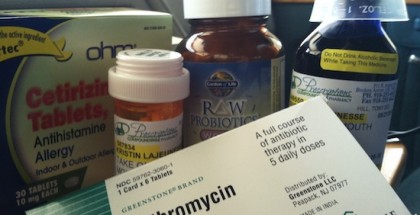 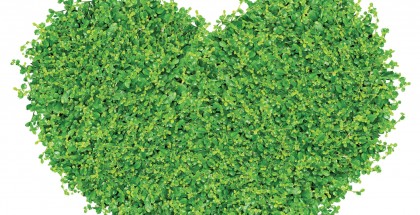