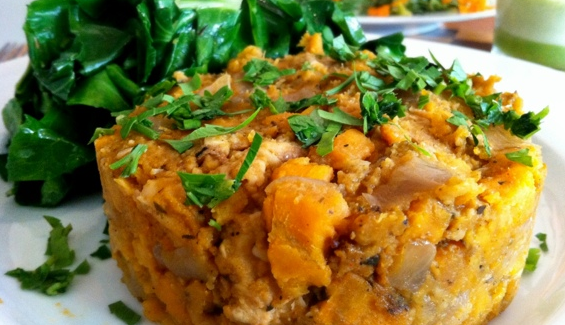 Before we head to NJ to pick up Gerty, we still had to take care of a few things. Lunch at Sacred Chow and personal shopping jaunt with The Ethical Man’s Dan Mims to find a vegan suit for Ethan to wear at an upcoming wedding. Weather aside, today was a good day. 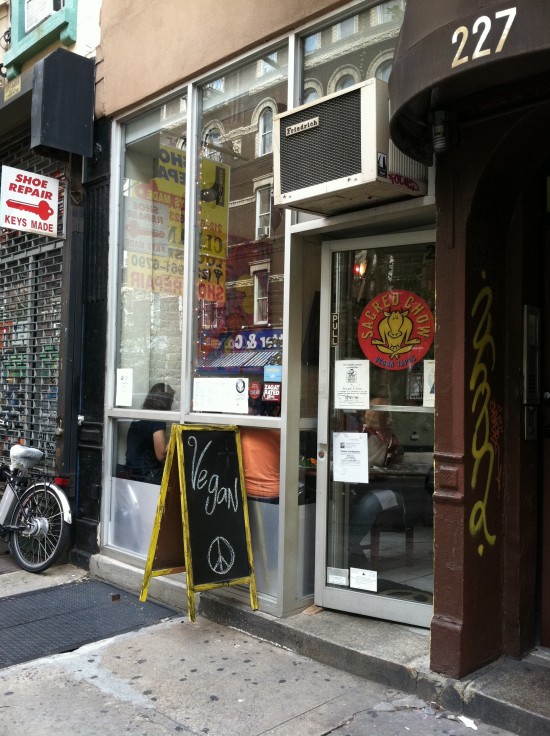 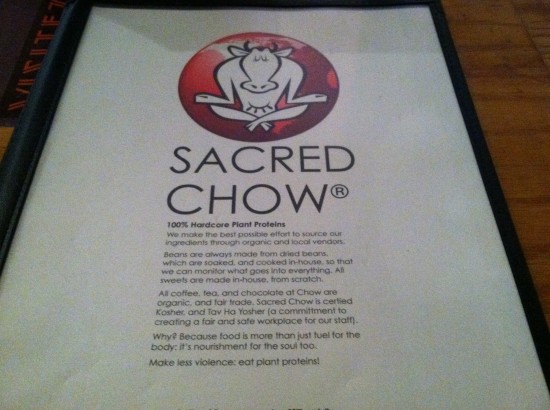 So, so, so, so good. Creamy, light and bursting with flavor. The texture was thicker than I expected, unlike other paté that I’ve had before. It was delicious! 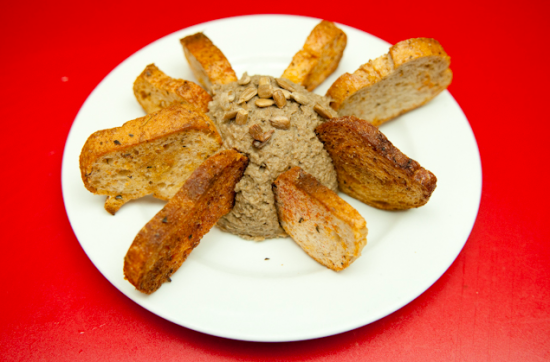 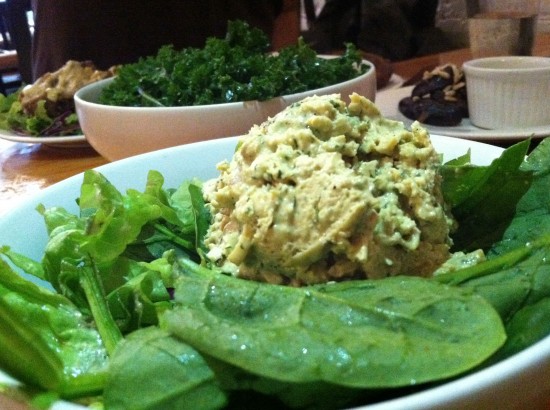 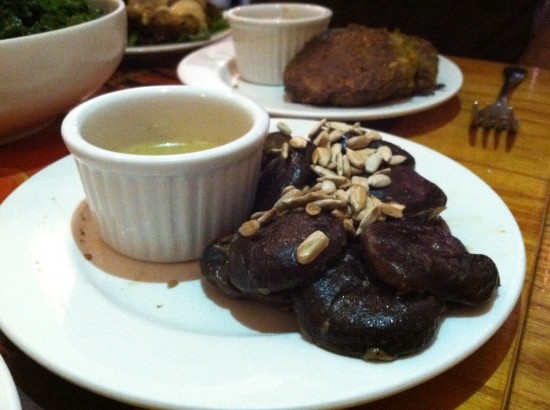 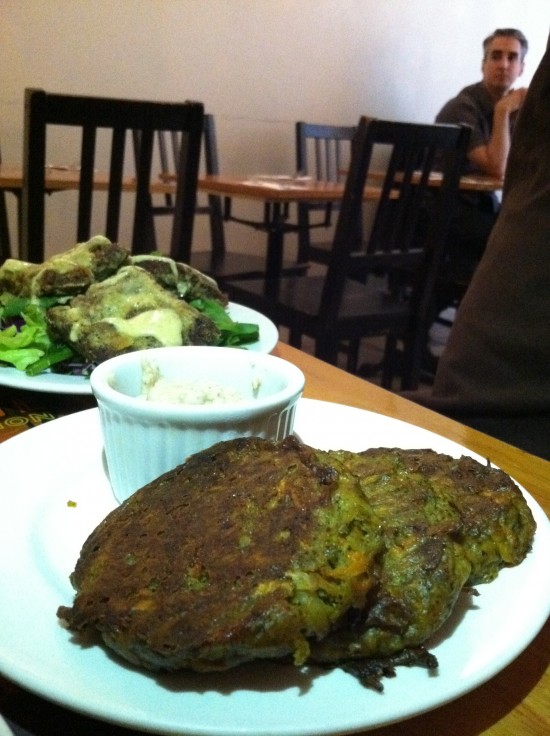 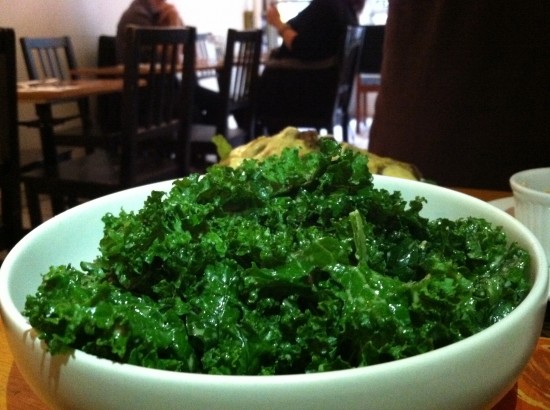 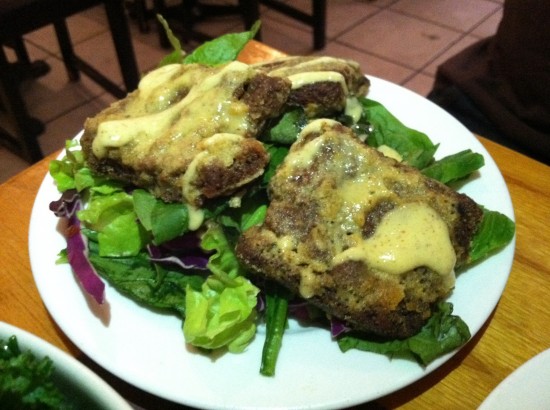 Did we get dessert?! You know us too well! ;) We got the Chocolate Truffle Cake with strawberry ganache & pralines. Very, very good. We also had the Sinner Bar – coconut caramel dipped in chocolate but for some reason I don’t have a pic of that one. You can sort of see in there, in the background of the cake pic. I think Ethan fell in love with the Sinner Bar. He was a little protective of it. ;) 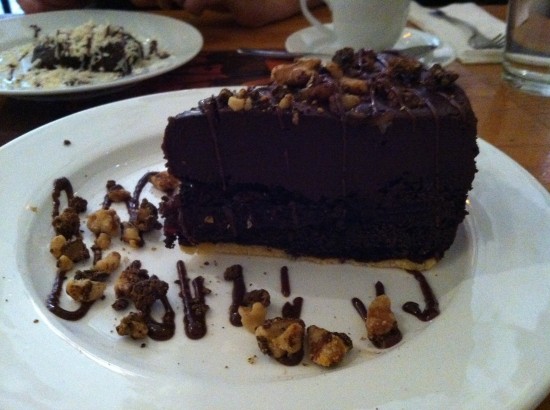 We had actually been to Sacred Chow a few weeks prior when we were in the city for a vegan wedding party (yay!). Naturally we “snapped” a few pics of our brunch. Oh my heaven… the brunch menu at Sacred Chow is mind blowing. I ordered the Better Than Biscuits & Gravy. One of THE best breakfast meals I’ve ever had. Ethan was delighted with his meal as well. He had………. 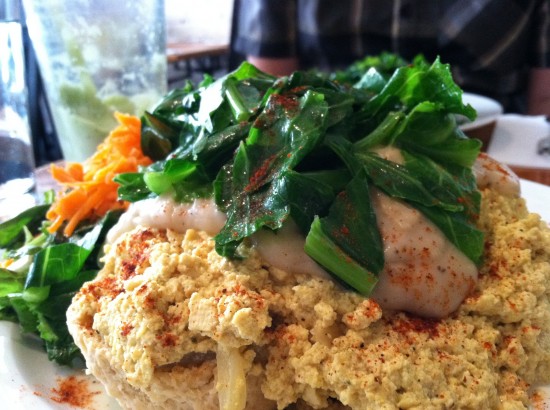 UPDATE: Here’s a pic of the hash. This was a dish I’d eat anytime. 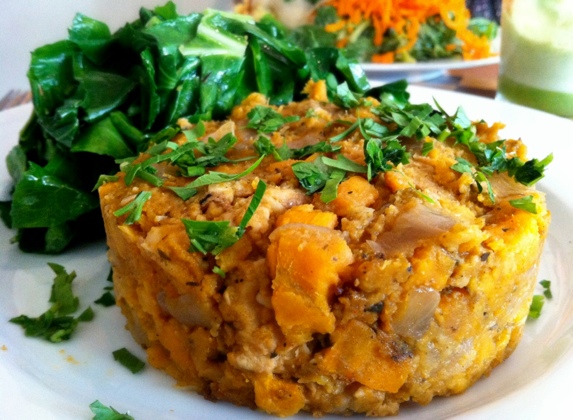 Apparel and Accessories on teh internets.

It started raining and we’re lost on the way to meet Dan Mims, TheEthicalMan.com. No worries though. We’re a patient crew and we found Dan and Topman. Topman is crowded with apparel and is kind of an uncomfortable place to shop. However it did have what we were looking for and we are grateful for that.

One of my best buds, Jim, is getting married and, as I am in the wedding party, I need a purely black suit. Of the suits I have worn in the past, none were solid, usually they were pinstriped, rarely were they black, certainly they were not vegan. It has been a long time friends. TIme to re-enter the world of formal attire, only this time without the use of animal products.

Dan Mims specializes in this kind of thing and he happens to be an avid moral supporter for our adventure. We enlisted Dan to give us the lowdown on where to find a decent vegan suit that is affordable and stylish. He didn’t let us down. Pictures soon. Just waiting to get some back from the wedding.

We also sat down to talk with Dan about his website, TheEthicalMan.com, as well as his thoughts on presenting the vegan life to the world and what fibers to look for when shopping for new clothes!

Check out the video! And as usual, the outtakes are a hoot. 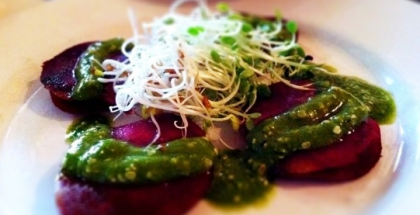