Witchcraft and Halloween are likely the first things that come to mind when you think of Salem, Massachusetts. But vegan food?! Maybe not so much.

It was a delightful surprise then when my dear friend Karen Scalia—who I met when during an internship at the New England Ant-Vivisection Society (NEAVS) about six years ago—told me about the great vegan finds in her local town of Salem, MA. Karen wasn’t just browsing to browse though, she is the founder and tour director of Salem Food Tours. And, like you might have guessed by the name, Karen takes guests on weekly historical walking food tours of this ever popular, quaint town just 25 miles north of Boston.

Unlike other food tours Karen not only has a unique perspective and deep knowledge of Salem’s food scene, but also of the regions illustrious spice trade history! In addition, her tours are kept fairly small (10-12 guests) to ensure that everyone gets to properly mingle, linger, and have plenty of food to sample.

On November 17th I joined a joyful group of vegan and vegan-curious folks on Salem Food Tours’ second vegan-centric outing. 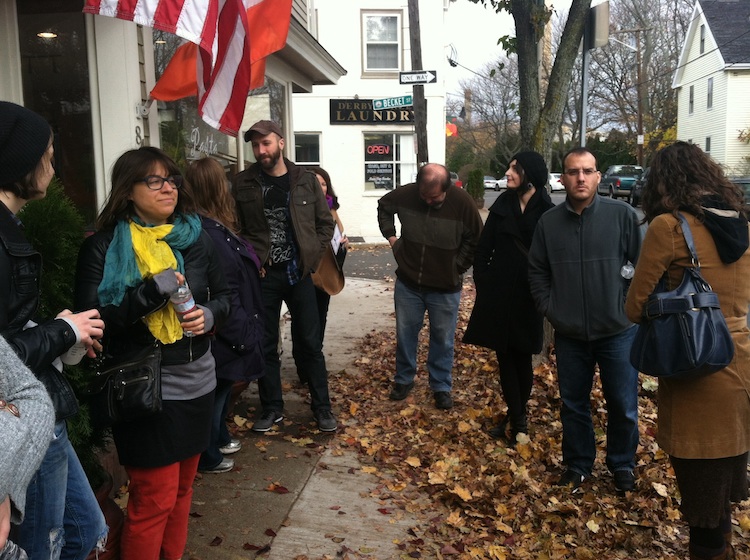 Initially I thought a 3-hour tour sounded like a long day but I’ll tell you, it went by in a flash! Not only did we hit up way more places than I expected but the company was absolutely delightful, I was super full before I knew it, and we closed out with some social [adult] beverages in the cozy rustic basement of our last stop – with live music and big squishy chairs to boot!

Without further ado, here are the places we stopped along on this Salem Food Tour. Oh and if you ever get a chance to visit Salem in the Fall it is incredibly stunning! The crisp air, colorful crunchy leaves, and cuddly stroll-enducing atmosphere make it an ideal getaway from the everyday shuffle.

Specializing in handmade pasta and ravioli, Jean Louis carries their own line of signature olive oil and gourmet sauces infused with wine as well. 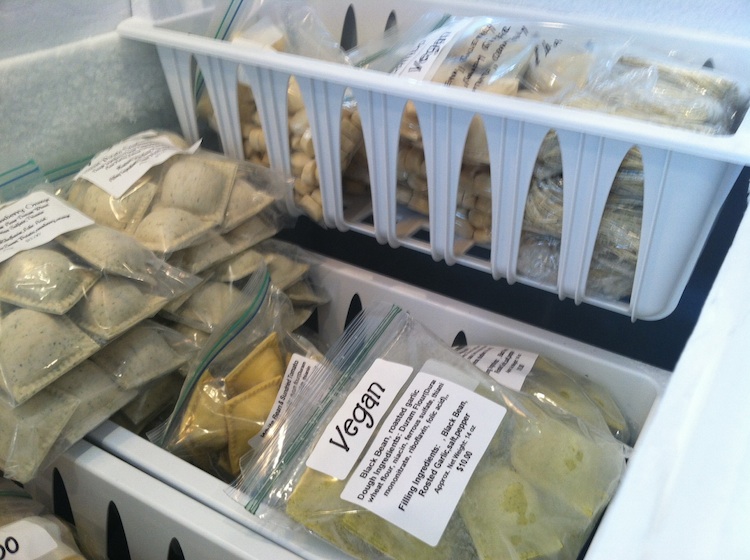 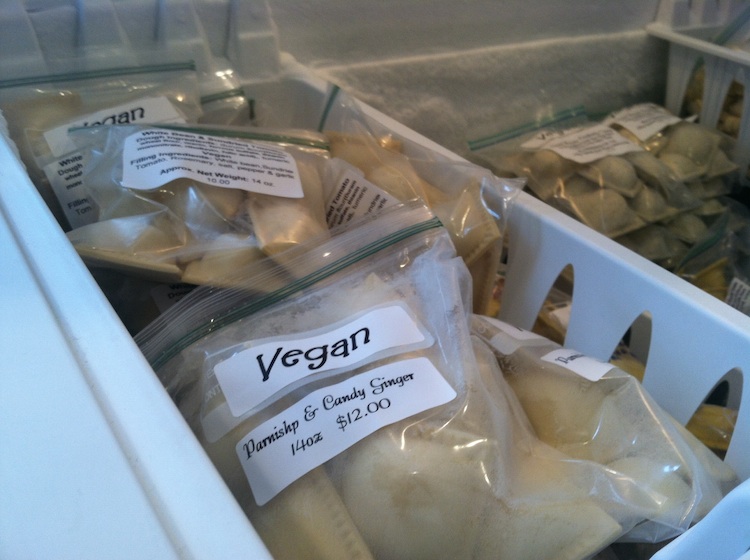 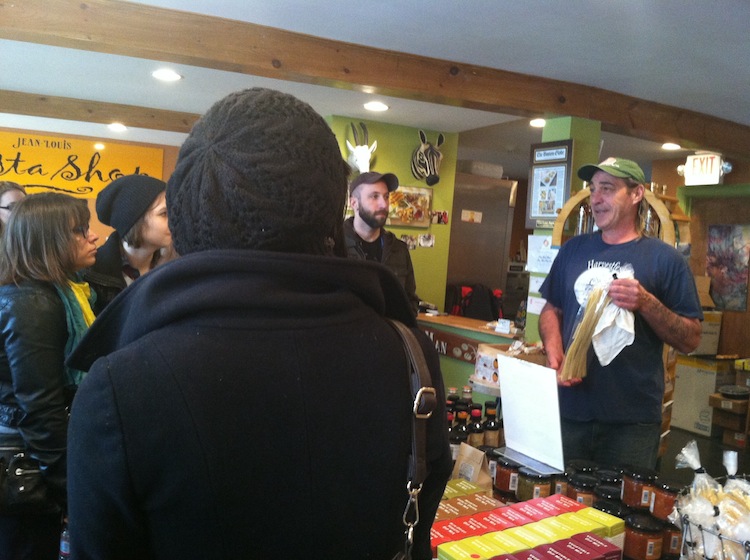 On this day Jean Louis himself made a vegan ravioli dish for us and OH MY LANTA it was fantastic!! I had all I could do to keep myself from buying one of every [vegan] thing in that shop. It all looked and smelled so good! 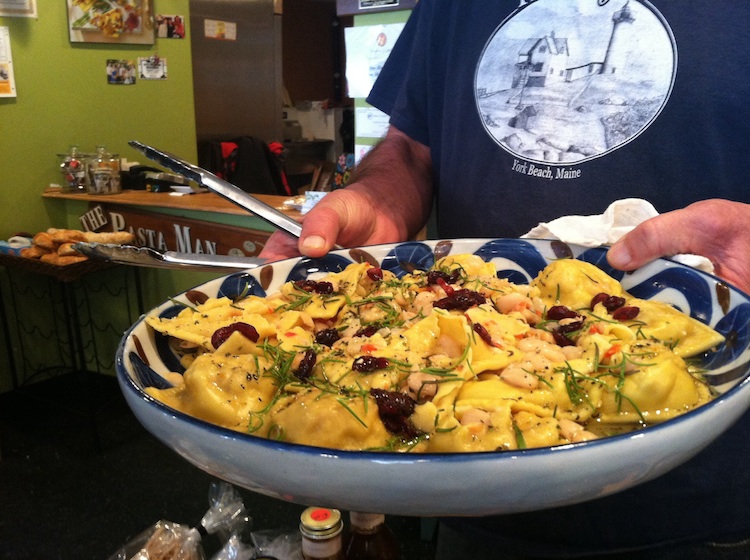 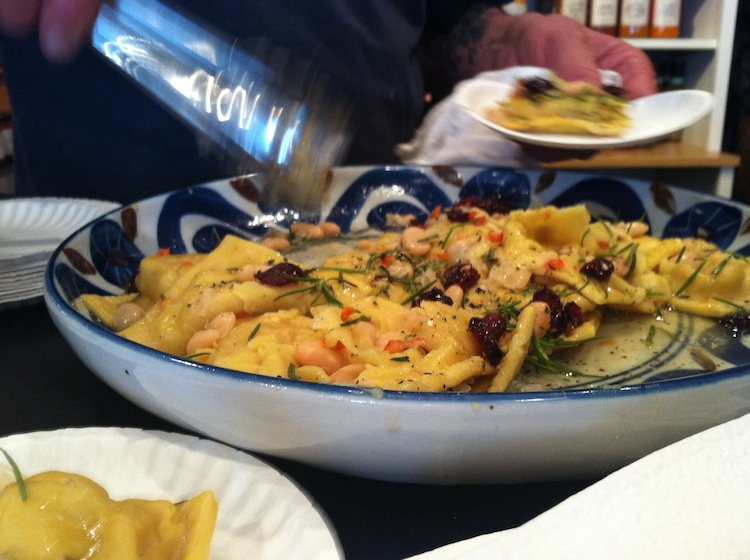 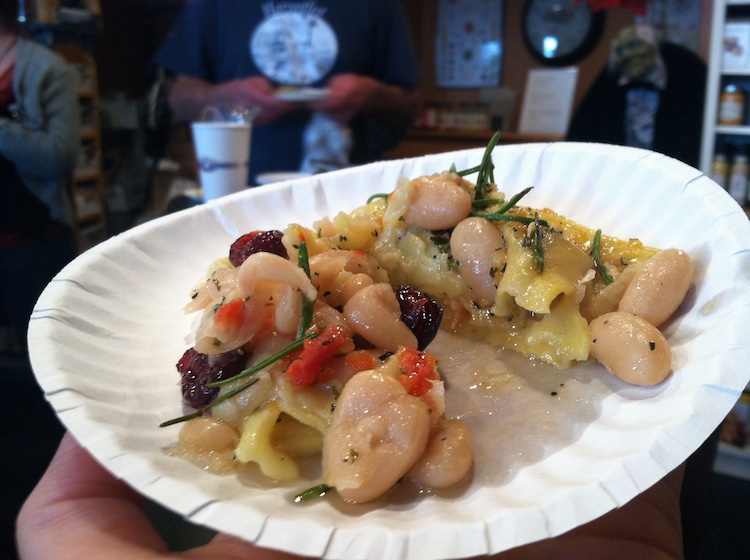 The dried cranberries up there? See ’em?! Oh my golly, those brought the dish to an entirely new level! Gah. So good!! 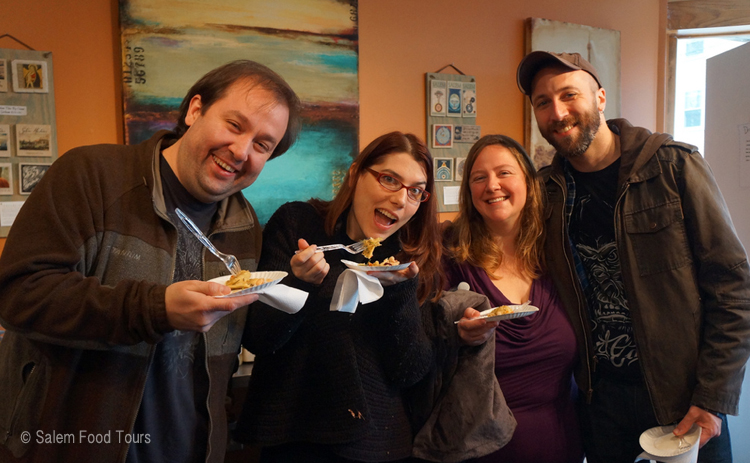 We stopped for a little history about Salem and the spice trade before our next destination. 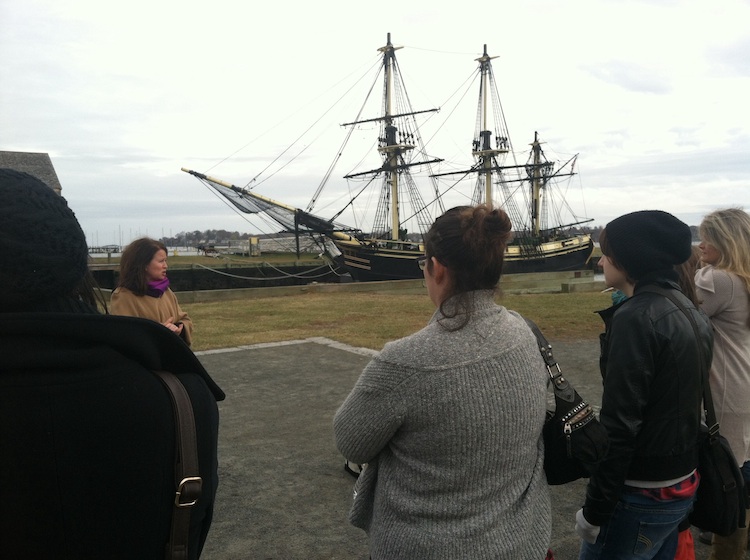 You might expect a spice shop with over 300 culinary spices, sauces, marinades, rubs, teas and cooking supplies to know a thing or two about spices in general. And you’d be right! Owner, David Bowie (yes, that’s his real name!) could seriously talk for days about the history of spices, what each is best used for, where they come from, and pretty much anything you’ve ever wanted to know.

This place is the real deal and I am so grateful that I was able to visit and sample some of their unique spices! 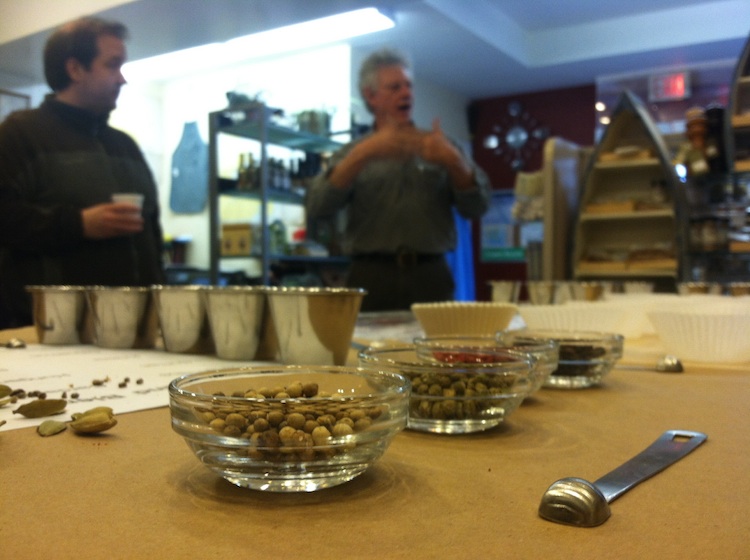 DID YOU KNOW? Pickering Wharf (where Salem Spice is located) is where the spice trade in the North American continent began. In 1797, Captain Jonathan Carnes arrived in Salem Harbor with his ship loaded in pepper from Sumatra which provided him with a 700% profit and started the spice trade which remained centered in Salem for over 50 years. Neat! 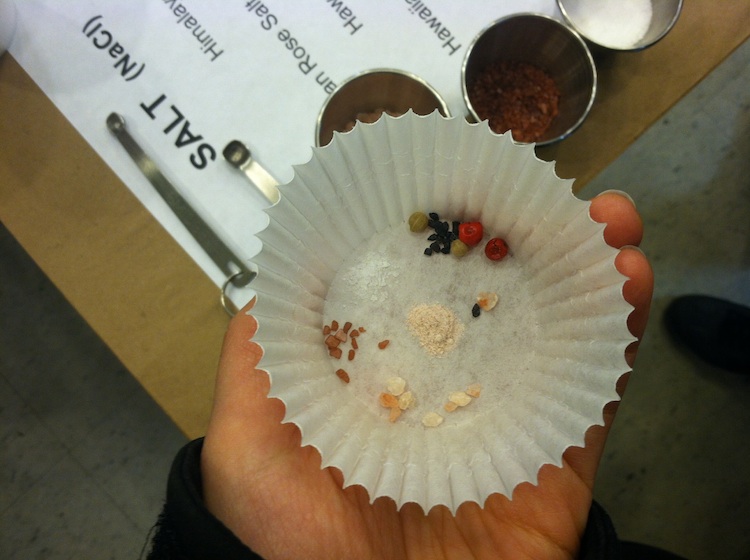 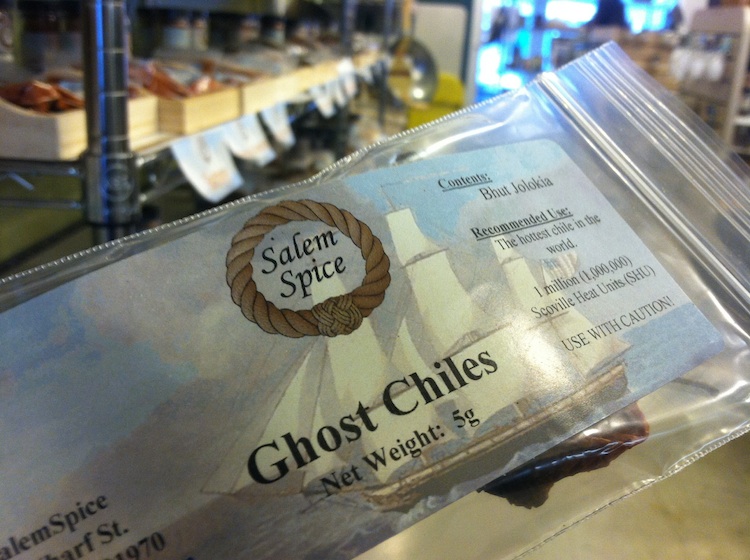 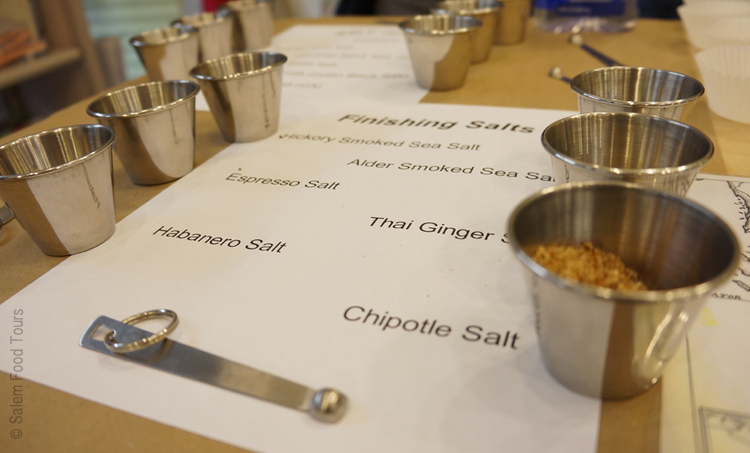 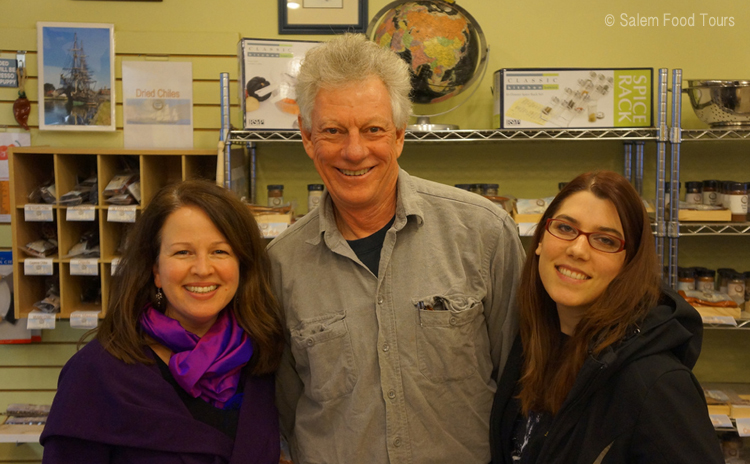 Oh I almost forgot – David and his wife also provided us with samples of their homemade pickles. Wwwwhooooaaa my gosh they were SO friggin’ good. Gah. I wish I took a photo of them! I wanna go back now please. :)

Our stop at this taqueria was a quick one, wherein we sampled some of their salsa. It was slightly on the hot side for me but was still yum-licious. They can modify a handful of menu items vegan-style so, should you find yourself in Salem with a hankering for Mexican cuisine, this is the place. 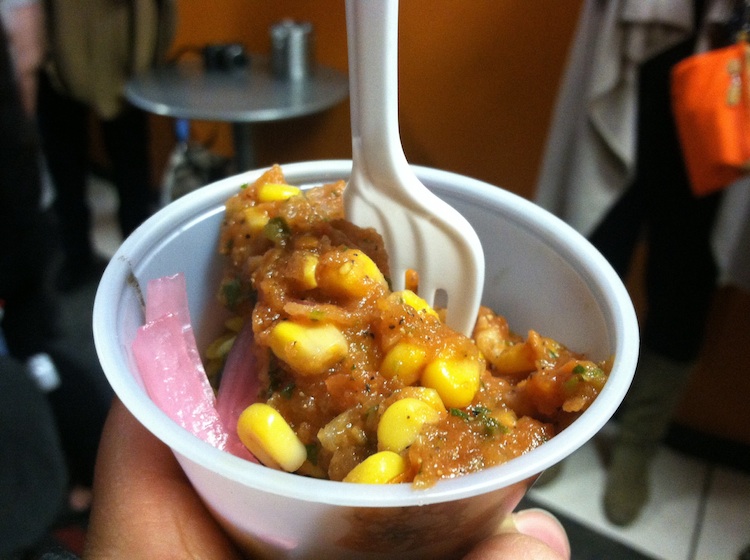 This was one of my favorite stops along the tour mostly because I love pizza. Flying Saucer has super friendly and helpful staff, they are enthusiastic about their vegan options, and even let us sample a seasonal pizza – which happened to be my favorite of the bunch! Hmm.. what was that called? It had a really cool name too. Darn it! I don’t recall the name of it. Humph!

As I look over their menu now while writing this post it occurs to me how much I regret not ordering their vegan garlicky bread knots, AKA “Space Balls: The Appetizer.” That’s the other super rad thing about this place, the names of all their menu items are.. well.. out of this world. ::teehee:: Get it? Okay, okay. No but seriously… The Leela, Pizza The Hut, and Beldar are the names of a few of their other vegan menu items. How couUULD you go wrong?! One of each, please! :D 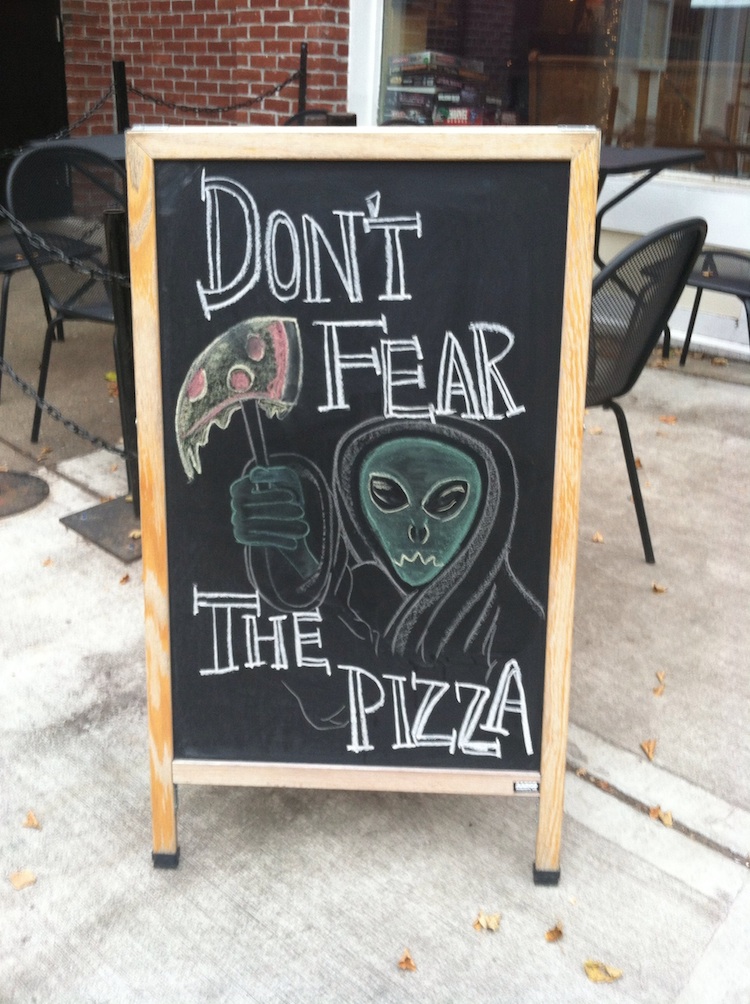 I find this sign immensely fun because it wasn’t until I lived in Boston (for four years, during and post-grad school) that I heard someone pronounce “pizz-ah” like “pizz-er.” Finally! Someone(s) else acknowledges this oddity as well! :) 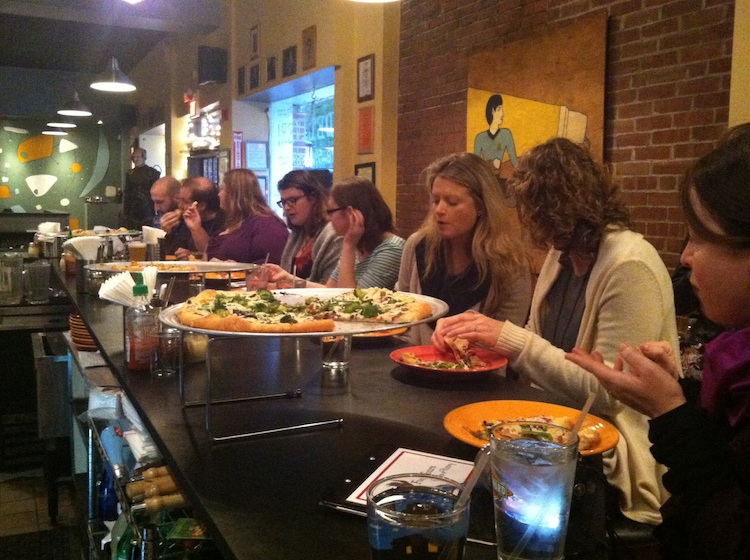 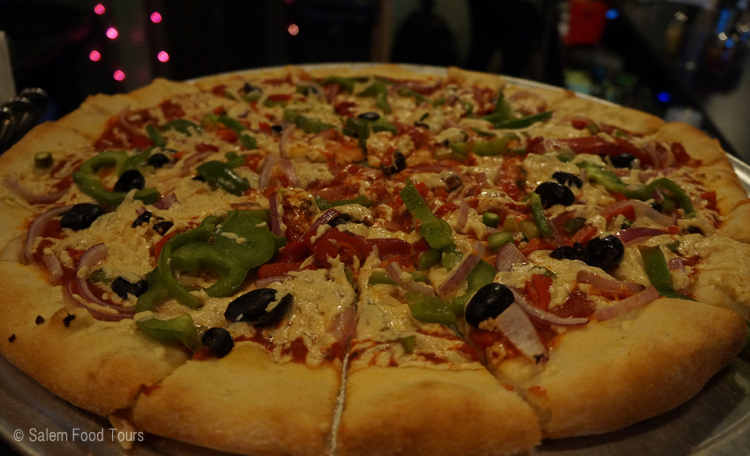 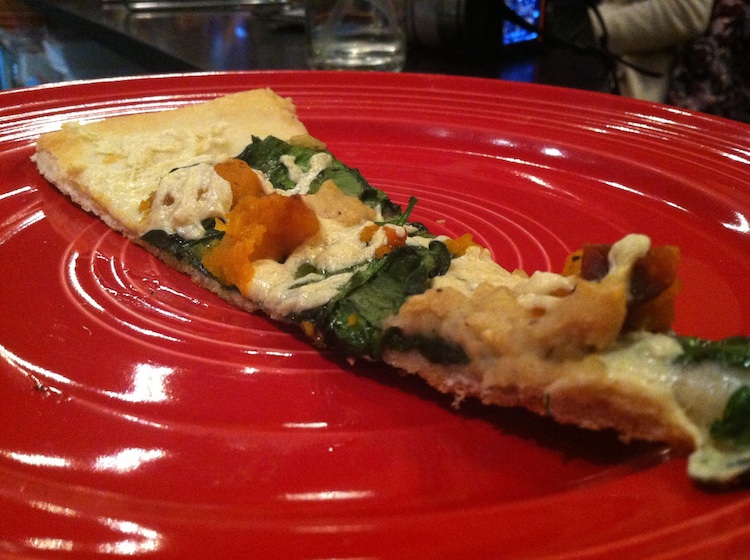 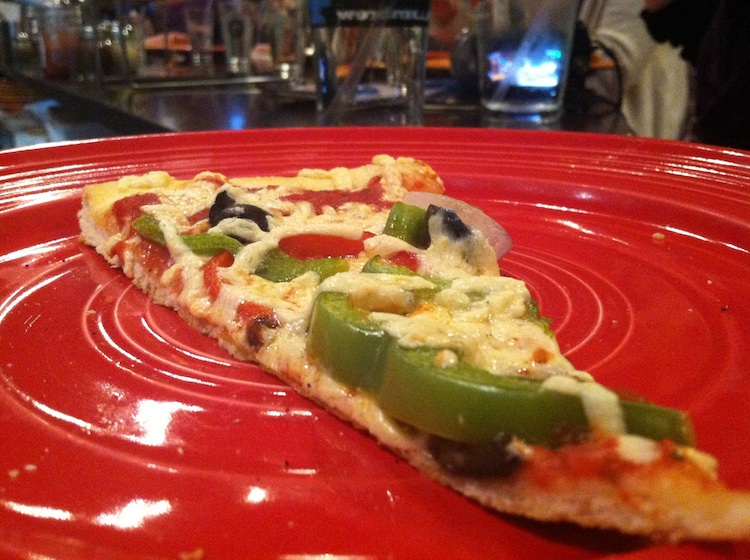 Why yes, that is Daiya vegan cheese you’re spying. Their fresh, made-daily pizza dough is extremely tasty as well. All around: great little hotspot in the heart of Salem. A must-visit for sure!

A longtime favorite of mine, Life Alive was one of the first vegan restaurants I dined at when I lived in Mass. My first time at *this* location was for a NEAVS holiday party. It was quite lovely. And this was my first time back since that little trip. Ahh the memories.

Not only will you find healthy eats at the Life Alive locations, but some of the most delicious meals in the country (IMO). Life Alive’s food is made of organic, whole plant-based foods, served fast and made fresh. Wow. That sounds like a commercial. I should write a jingle for them! Ha! ;) 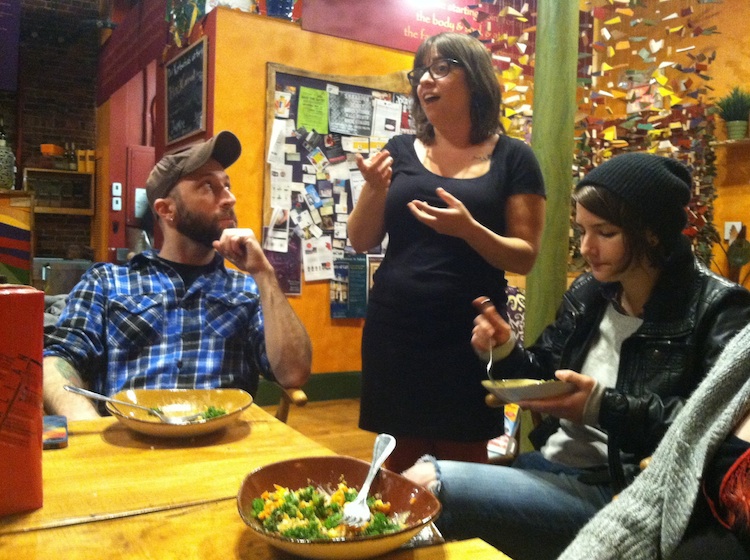 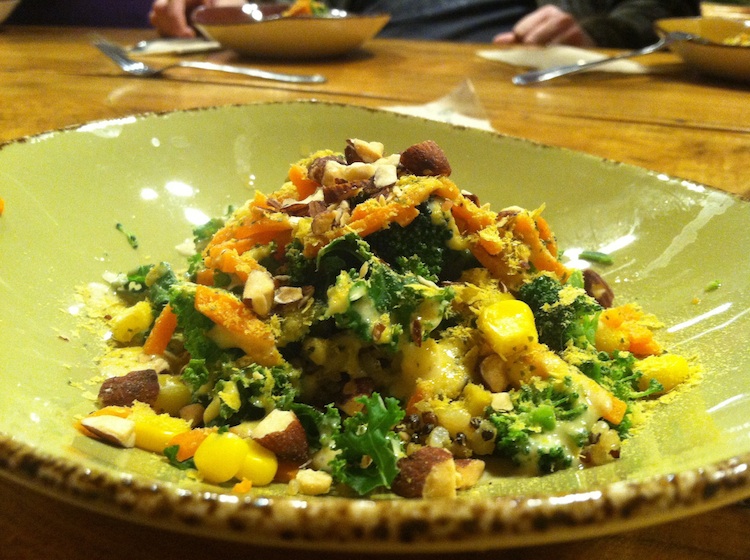 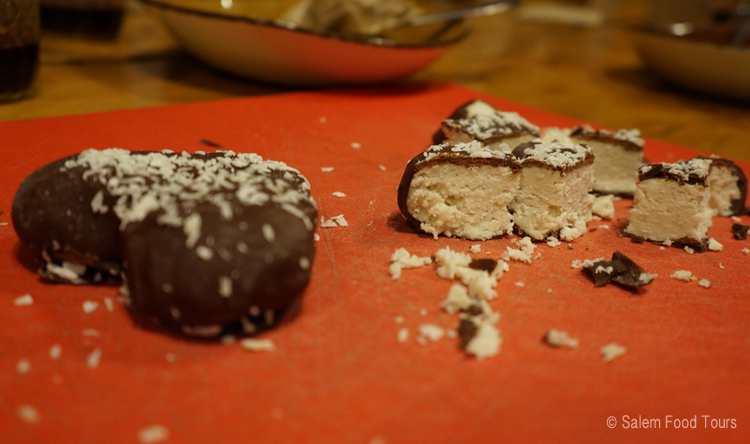 I highly recommend anything that comes with their signature Goddess Dressing (the Ginger Nama Shoyu Sauce). It’s so freaking heavenly!! They’ve got wraps, salads, soups, warm meals, and freshly made juices and smoothies. This place is nearly all-vegan as they do offer dairy cheese and milk for their sides and drinks, FYI.

“Oh my!” you say, “what is a perfume store doing on a FOOD tour?!” Great question, you! I have the answer. It is a fact that smell and taste are intrinsically linked and smell can greatly impact ones association and enjoyment of every meal.

According to THIS Live Science article, “The sensation of flavor is actually a combination of taste and smell,” said Tom Finger, a professor at the University of Colorado-Denver Medical School and chairman of the 2008 International Symposium on Olfaction and Taste… “If you hold your nose and start chewing a jelly bean taste is limited, but open your nose midway through chewing and then you suddenly recognize apple or watermelon.”

That’s because as you chew, you’re forcing air through your nasal passages, carrying the smell of the food along with it. Without that interplay of taste and smell, you wouldn’t be able to grasp complex flavors. Instead you’d be limited to the basic taste sensations picked up chemically by the tongue: salty, sour, sweet, bitter and umami.

While our stopover at AromaSanctum Perfumes was less about food and more about body fragrances it was an enjoyable mini-break from the impending food coma we were all gradually slipping into. 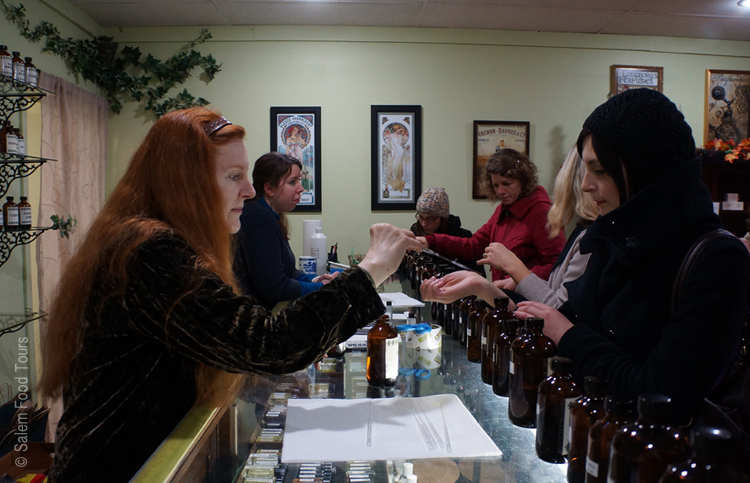 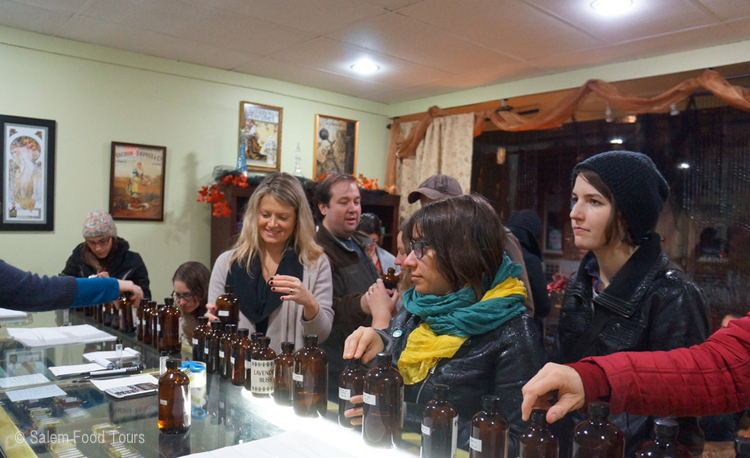 A neat thing about this place is that they can mix custom fragrances for you right on the spot! It was pretty interesting to see how the same mixture could smell so completely different depending on who is wearing it.

We’ve got one more stop before closing out an incredible day.

This was absolutely THE place to end the tour! Beautifully plated, light sushi at a large table for us all to share. The vibe was warm, the lighting was dim and intimate, and the food equally romantic.

The only thing I regret is not saving room in my stom for more of this delectable fare. 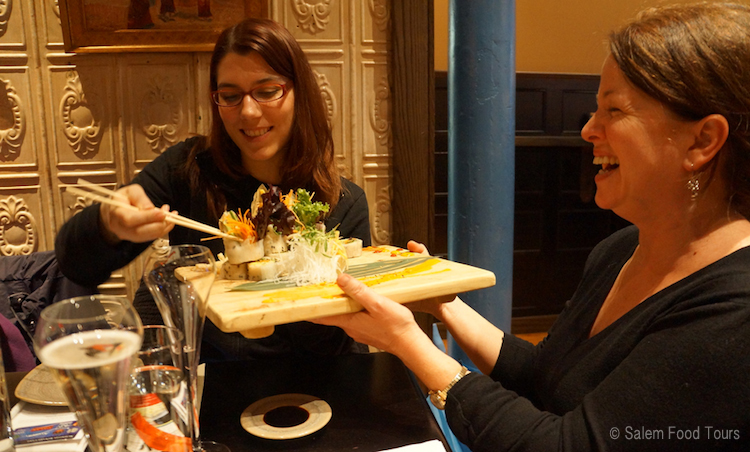 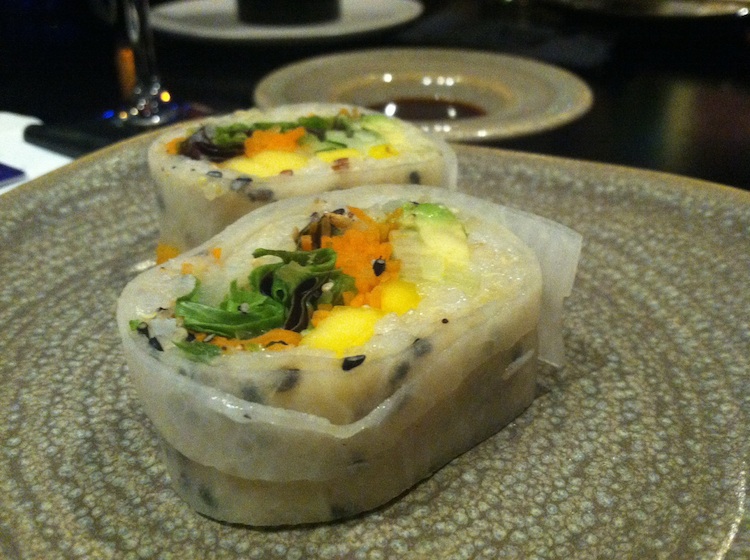 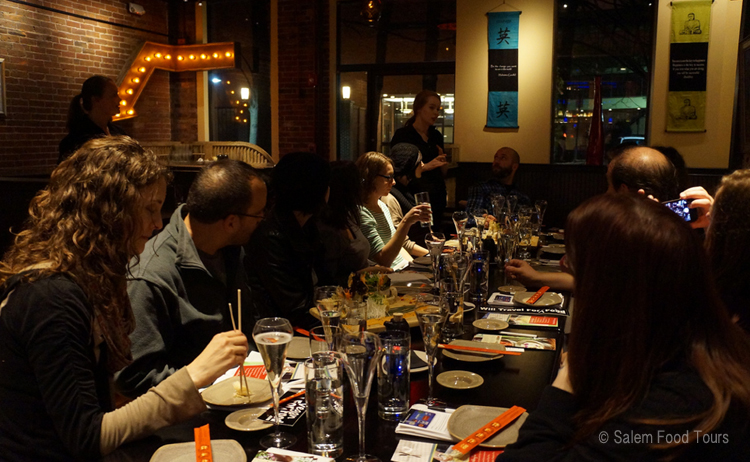 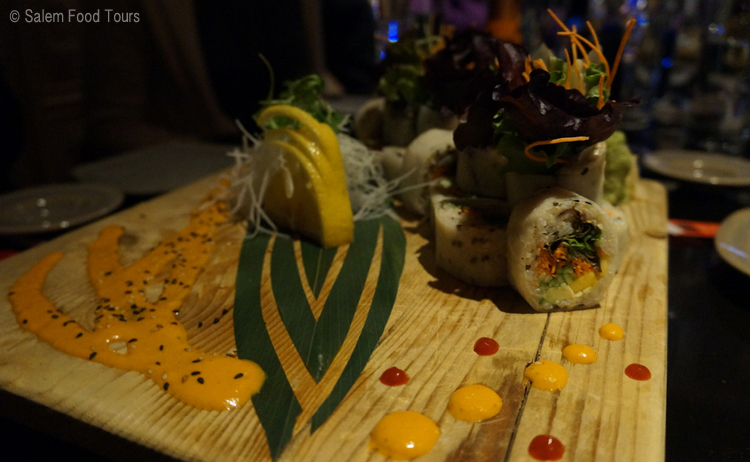 As the day wound down most guests said goodnight. A few of us moved the party downstairs to a really great, snuggly basement bar and lounge with live entertainment. I definitely plan to visit Opus again soon. <3

Thank you SO MUCH to Karen Scalia of Salem Food Tours for creating an ingenious method of exploring food while also learning about the history of one of the countries hottest little towns; to the restaurant owners and managers for their kindness and generosity; and to my tour buddies for making this such a special Fall day in Salem, MA.

To learn more about the vegan – and other – food tours that Karen gives, check out: salemfoodtours.com.