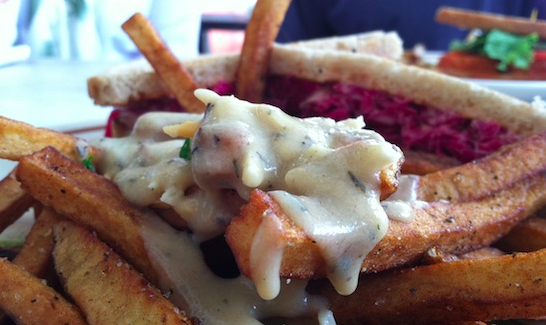 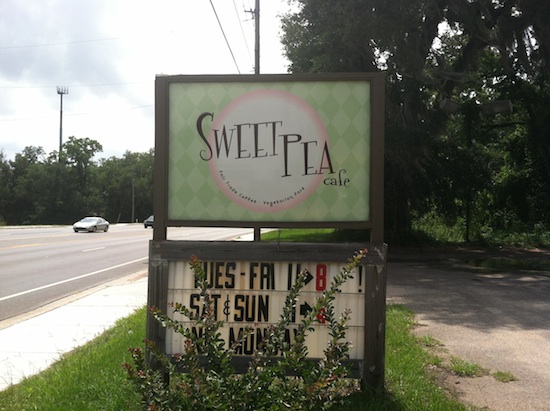 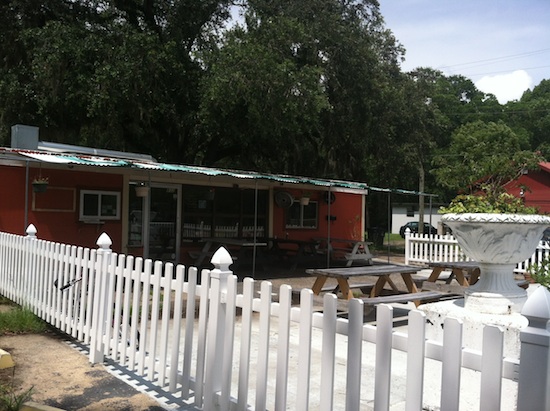 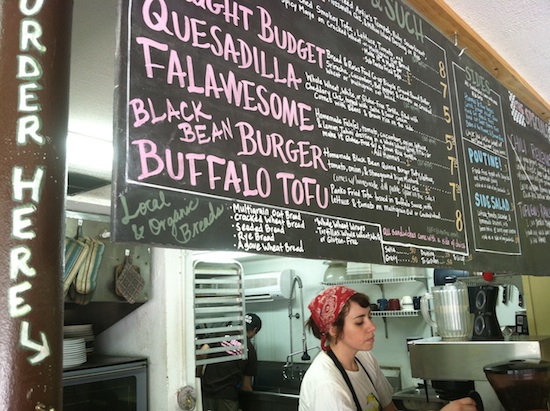 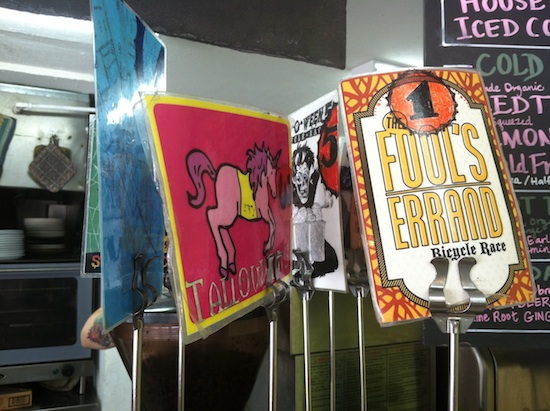 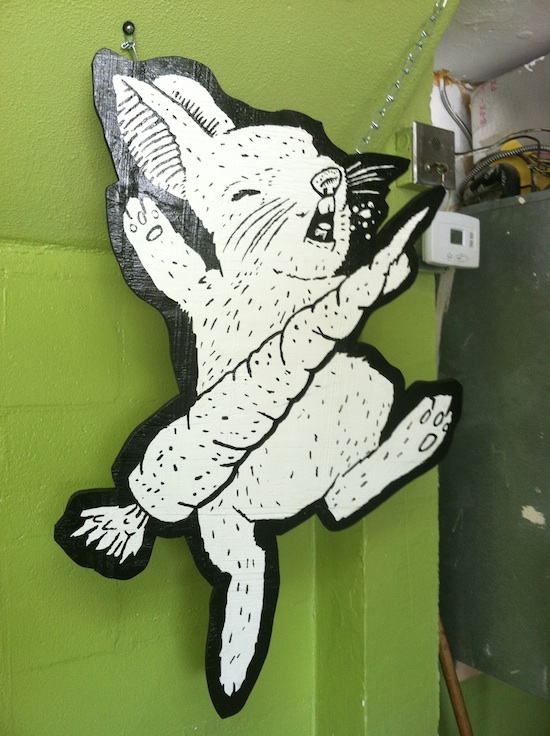 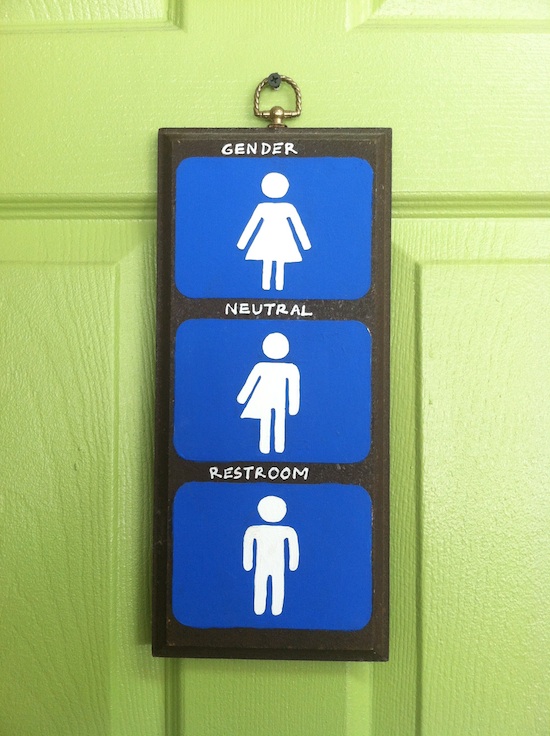 This little cafe is one of the only vegan restaurants I’ve encountered that makes vegan poutine!!!! I nearly fell off the bench when I saw it on the menu. Actually, the only other time I’ve had poutine is when Ethan (travel buddy from earlier in the trip) and I visited Montréal back in November. The poutine in Montréal was homemade by the awesome Alexandre Gagnon (our self-elected host and vegan guide). If you’re unfamiliar with poutine AND would like a recipe, click here for the awesomeness of what Alex made while we were visiting him in Montréal! In short, it’s french fries smothered in gravy and melted cheese. MmmMMMmmmm!

Anyway, back to it…so obviously I ordered a side of poutine along with a Tempeh Rueben – sautéed tempeh, ruby sauerkraut, melted vegan cheese, and “million island dressing” on organic rye bread. It was great!! Eric had the Flawesome – garden herb falafel, tomato, cucumber, lettuce, and onion with lemon-tahini dressing in a gluten-free tortilla. He also got a side of poutine! :) I had a bite of the falafel wrap and can tell you that it was absolutely phenomenal.

The food here is hearty, filling, and super flavorful. The folks we were sitting with all seemed to enjoy their meals as well. Can’t really go wrong. As I look back over the menu now I keep eyeing the Buffalo Fried Tofu – panko fried tofu tossed in buffalo sauce with lettuce and tomato on multigrain oat bread. **drools** Gosh. They also have cool drinks, like cucumber lemonade!!! 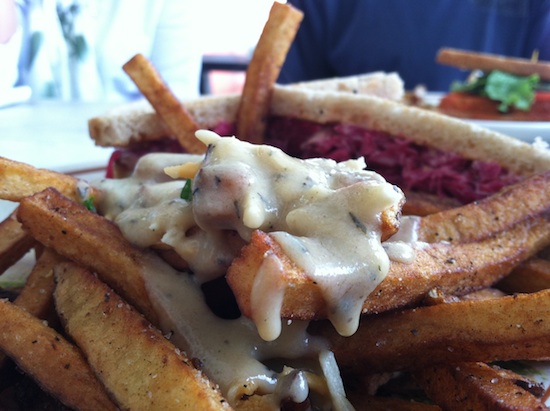 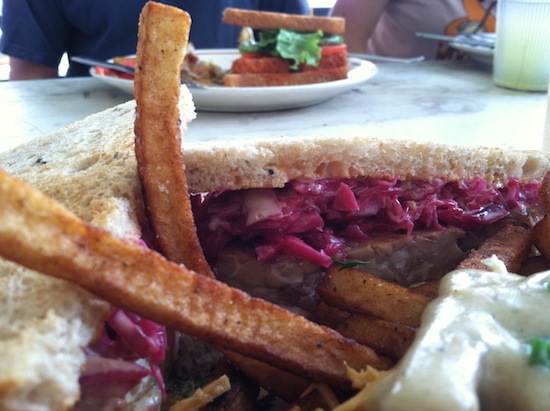 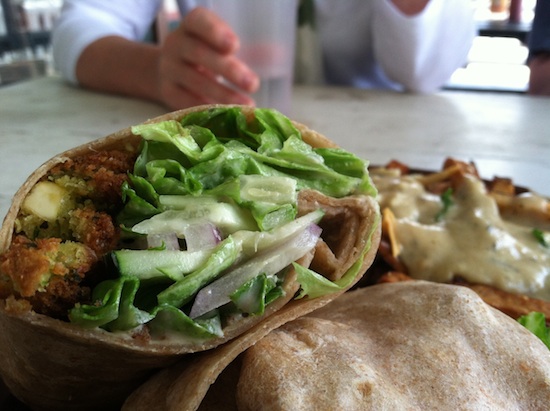 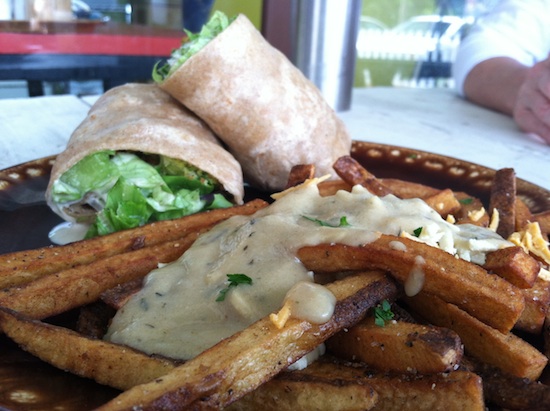 Me and Eric enjoying our chow! 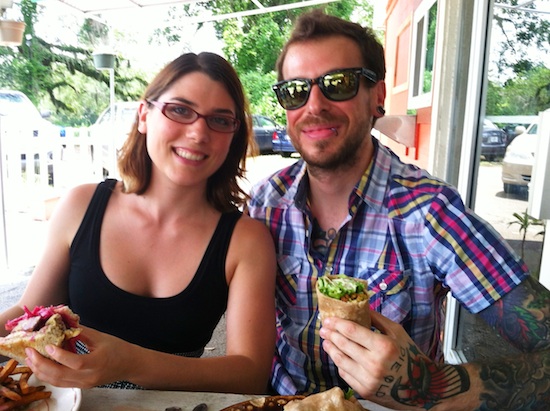 This is Rachel, the founder and owner of Sweet Pea. We ended up chatting for a while, after our meal, and she’s just the nicest ever! They’ve really got a great thing going on here. Definitely worth stopping by if you’re in the Tallahassee area! 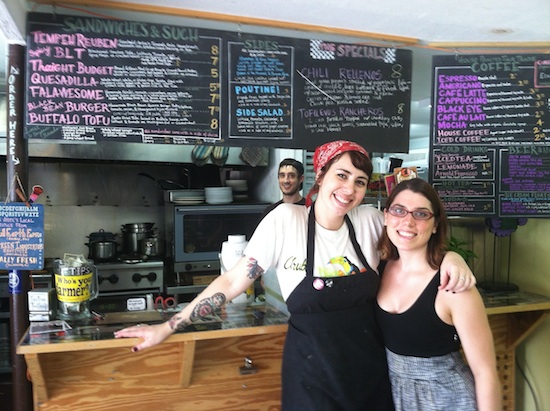 Thanks so much to Julie S. and the Tallahassee Vegetarian Community for keeping us company at Sweet Pea. It was so great to meet each of you! :) And thanks to Rachel for chatting us up, and for providing awesome vegan noms!!! xoxo

Next up is Sluggo’s flagship restaurant!

This place is pretty cool. It’s set in a dive bar where they  have live music nights and weekends. And I’m pretty sure the kitchen is open all hours (at least on the weekends). It feels a bit gritty when you walk in but the service is great and the food is as greasy-dive-bar-ish as you can get! :) 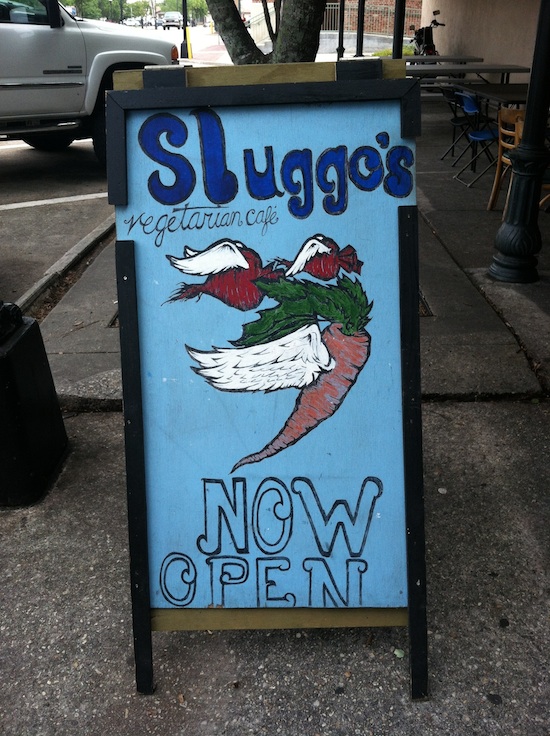 Eric and I split Sluggo’s Spicy Cheeky “Wings” – breaded and grilled seitan DRENCHED in hot sauce, with soy ranch dressing and a side of carrots. Yum! I also had the Lentil Burger Melt, which was like nothing I’ve ever had before. It had a great homemade cheese sauce topped with mushrooms and onions, with a side of savory collards.

Eric had the Philly Seitan – a local crusty roll with grilled peppers and onions, smothered in Sluggo’s homemade cheese sauce. It was pretty friggin’ awesome!! The homemade sauce is incredible and the Goddess Dressing on the side salad was crazy delicious too!

For dessert we split a Mountain Dew Cupcake. It tasted lemony and was very moist. Unique too! NOM. 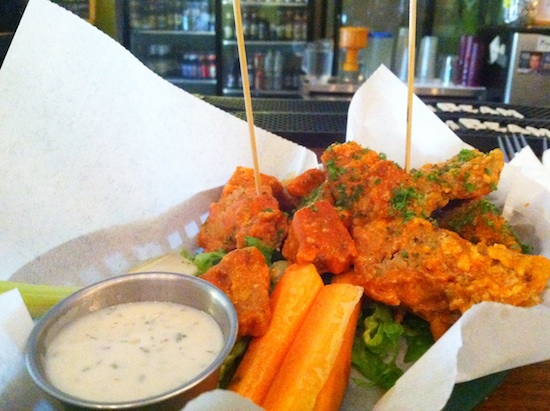 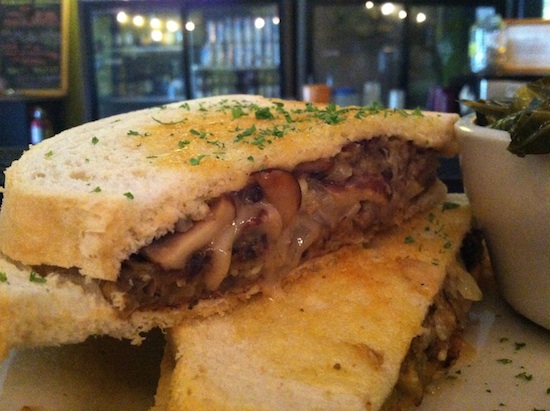 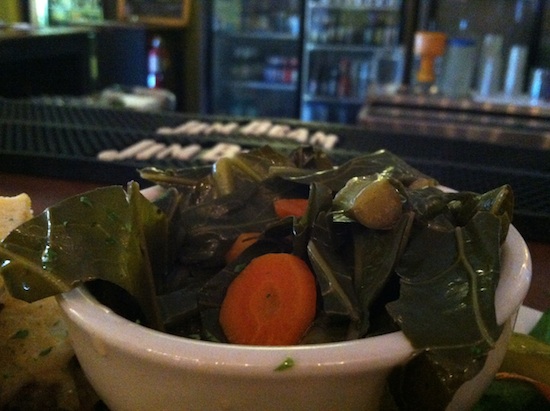 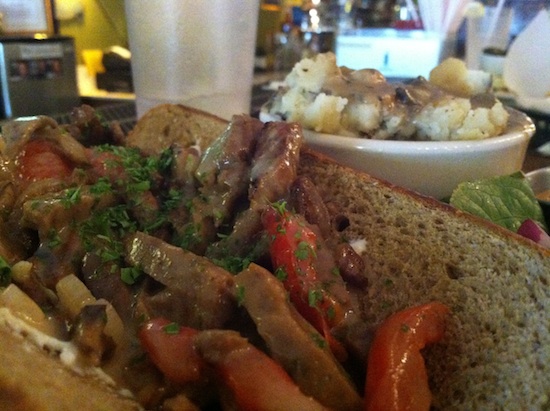 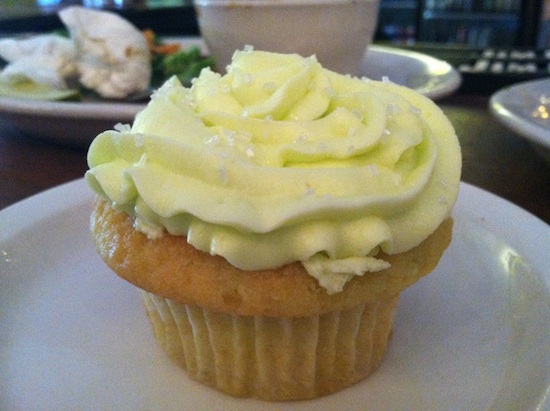 This is it! The very last restaurant that I ate at in all of Florida! It feels like an accomplishment since I visited a total of 36 veg restaurants in the whole state. My goodness! And it only took about two weeks. That’s a lot of driving and eating, my friends. Woo!

Similar to Sluggo’s, End of The Line makes their own cheese (which you can purchase over the counter too) and (I believe) they host lives shows every so often. End of The Line is a little less divey though. I like ’em both! 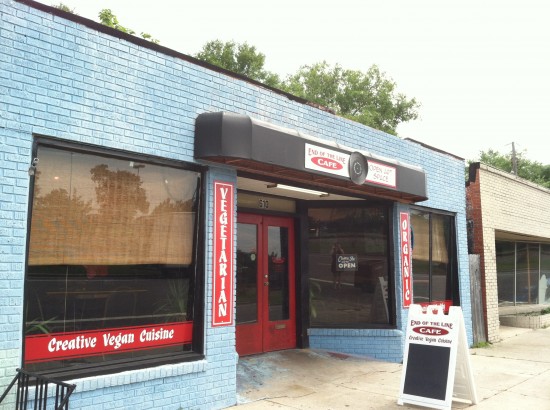 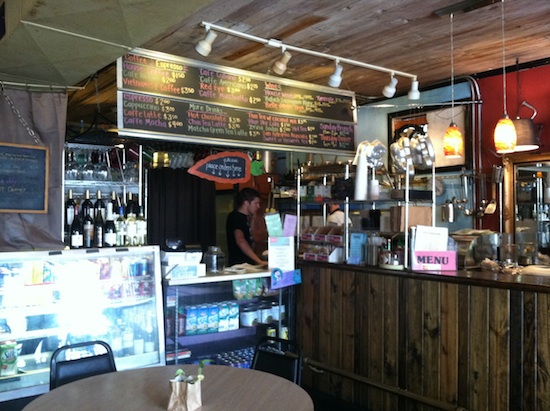 I had the Tempeh Tuna Wrap which was an awesome grilled tortilla filled with tempeh tuna, lettuce, onions, and vegan mayo. I don’t think I’ve ever had a mock tuna sandwich with a tempeh base. It’s usually chickpeas. I’m not sure if that was the secret to turning this wrap into one of the best mock tuna eats I’ve ever had, but it certainly did the trick in terms of texture and flavor. MmmMM!

Eric had the Quesadilla – vegan pepper jack and cheddar cheese, pico de gallo, black olives, jalapenos, sour cream with beans and rice on a bed of greens. It was pretty wonderful.

We also tried End of The Line’s Carrot Ginger Soup special as well as their Tabouli and Pasta Salad samplers. Everything was excellent. 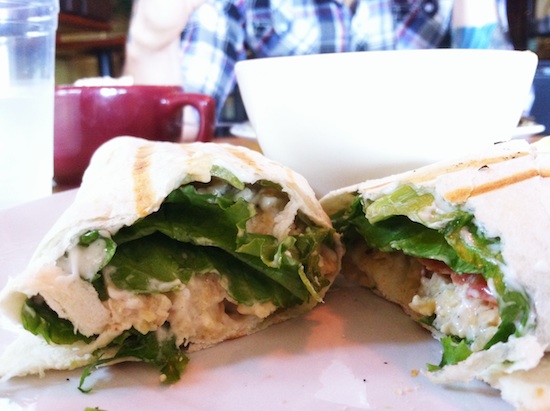 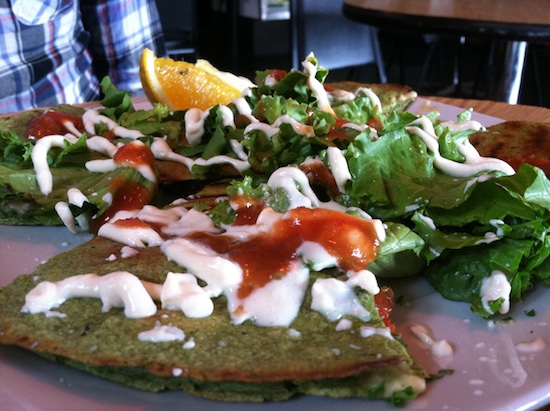 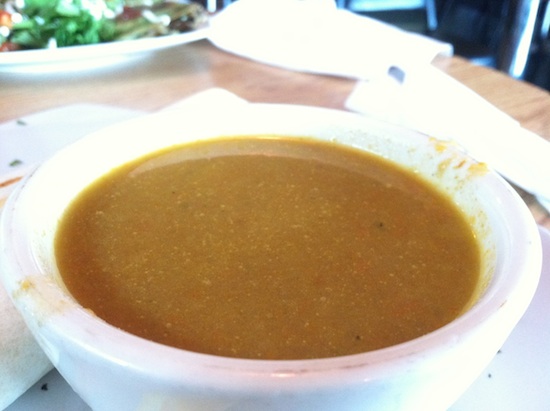 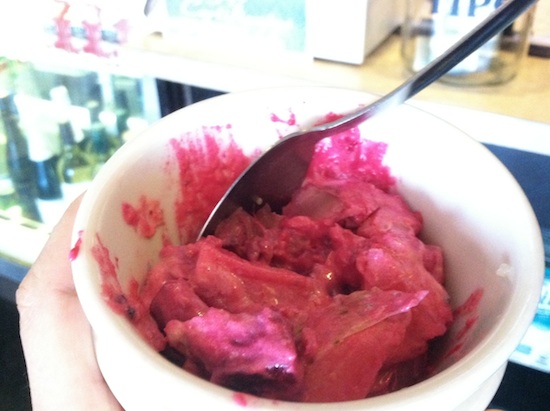 From here Eric and I headed north through Alabama and I then dropped him off in Tennessee as I continued on to Kentucky. Stay tuned. Soooo much more to come! :D