As I mentioned in the first post about Asheville, there is only one restaurant (that I know of) that serves vegan food exclusively and that’s Plant. If you missed it, click here to read about Plant and some other vegan-friendly Asheville eateries. Despite this I spent another day in Asheville as there were a few other vegan-friendly restaurants that came highly recommended, along with two vegan companies that are now establishing their roots.

I was able to score a twofer on this day as I dined at the Laughing Seed Cafe with Scott and Pamela, the founders and owners of Wingbean (a vegan meal delivery service). More on that awesome couple in a bit. :) 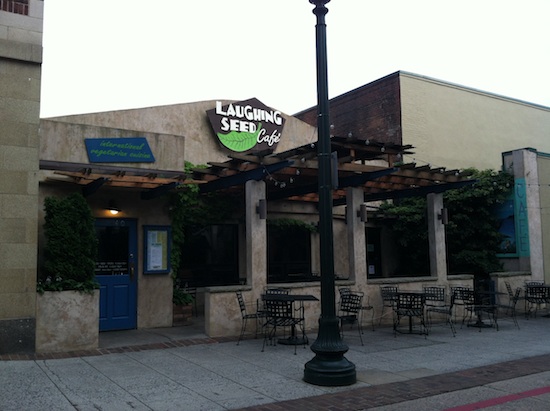 We started with some yum-o fries. Scott ordered one of Laughing Seed’s huge, filling salads and I opted for the Bahn Mi – a Vietnamese style sub sandwich. Marinated seitan topped with house made kim chee, pickled carrots, daikon and cucumbers, cilantro sprigs and spicy mayo served on a warm homemade hoagie roll. It was great! 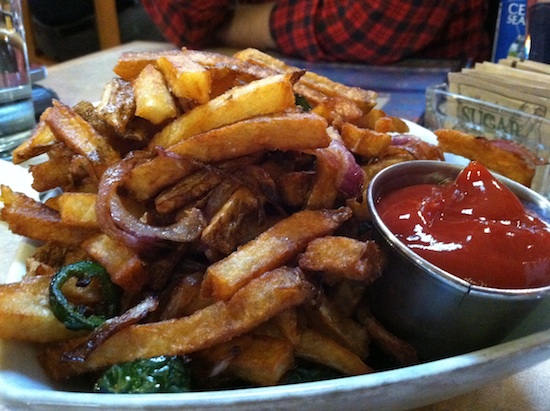 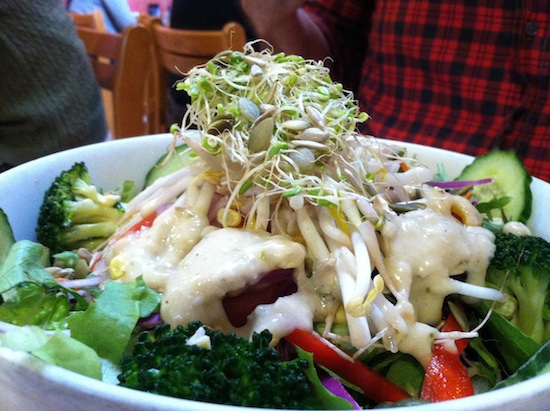 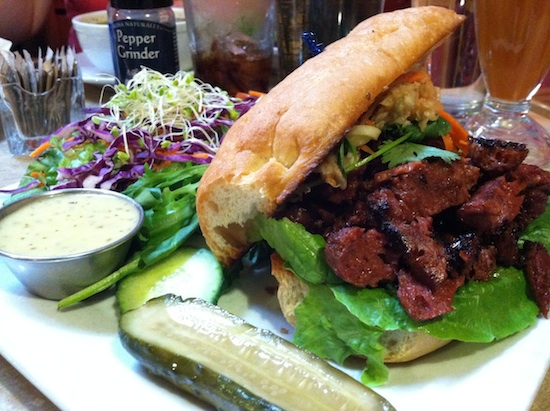 While we sat there, chowing down on vegan noms, I hit “record” on my iPhone and proceeded to ask Scott and Pam a bazillion questions about their relatively new vegan meal delivery service, Wingbean (love the name, btw. Catchy! ;).

Wingbean sprouted its wings (see what I did there?) in July 2011. Pam and Scott currently cook and bake out of a community kitchen until they’re able to afford their own, custom kitchen. Apparently there are a few local tempeh companies that share this space as well. Nice!

This vegan power couple specializes in home delivery of delicious, gourmet, vegan meals. They offer single dishes at the Asheville Tailgate Market on Tuesdays but typically they prefer that customers order a week’s worth of meals at a time. However, they are not a “meal plan” type of biz, they just wish to supplement shopping and cooking with good, healthful meals for those who don’t have time during the week. They pick up their fresh, mostly organic supplies from local farmers on Saturdays, cook on Sundays, and deliver on Mondays. They offer three entrees, four side style dishes, a thirty-two ounce soup, and dessert options.

I love that they talked a lot about wanting to support the local community. They primarily get their veggies from Blue Meadow Farms in Asheville, which is run by another passionate, local couple. So cool.

Do you want to try it out? Go to their website and 1) check out the menu, 2) place your order by Friday at midnight, 3) the food will be delivered on Monday. Easy as vegan pie! The check-out process is super quick and easy. You can subscribe so that your deliveries are ordered and shipped automatically, or you can build your own bag from the menu selection of that week. They deliver within a 20 mile radius of Asheville too!

WHY THEY WENT VEG

Pamela (chef and co-owner): She said, “I always knew that meat came from animals but it didn’t [click right away]. At some point I read an article and finally made the connection, and became vegetarian” at the age of fourteen. After that “veganism just seemed like a logical conclusion to me” and I went vegan at the age of eighteen. “I’m not sure what exactly sparked it but knew it was going to happen. It just seems to make sense if you’re doing it for ethical reasons.” She also noted that she experienced onging headaches growing up and her doctor suggested that she give up milk. At the time, she was already vegetarian so the only thing she had to get rid of after that were eggs.

Scott (marketing director, delivery driver, cheif dish washer, baker, co-owner): He said, “I’ve always been sensitive to certain things and growing up had bad feelings about eating meat and dairy. There were moments in college that I’d be at a BBQ and look at ribs on the grill and think, ‘those are someone’s ribs.’ It wasn’t until he met Pam that he felt confident in making the transition but believed that there was always a veg inside that wanted to come out. :) 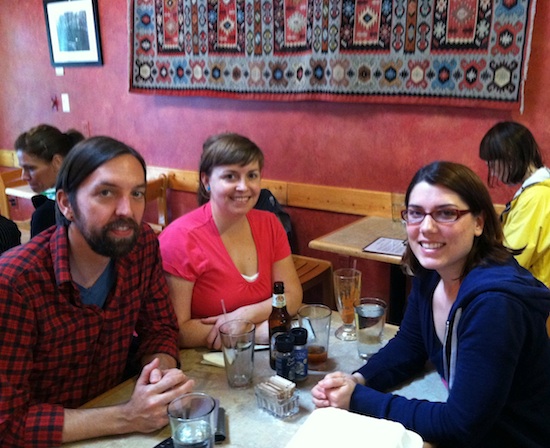 Thanks so much to Pam and Scott for meeting up, chatting, and the meal!! What awesome company! And best of luck on future biz stuffs!! :)

After lunch with Scott and Pam I drove to the Asheville Tailgate Market (AKA, Farmers Market…really though, are there any other cities that call Farmers Markets Tailgate Markets?) to meet the SUPER awesome lady behind I Heart Veg, an all-vegan bakery and sweets company, based in Asheville. 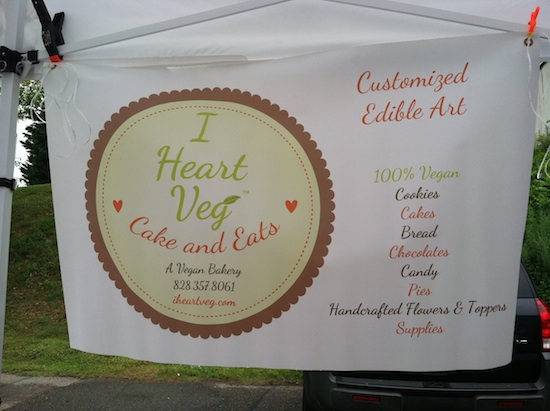 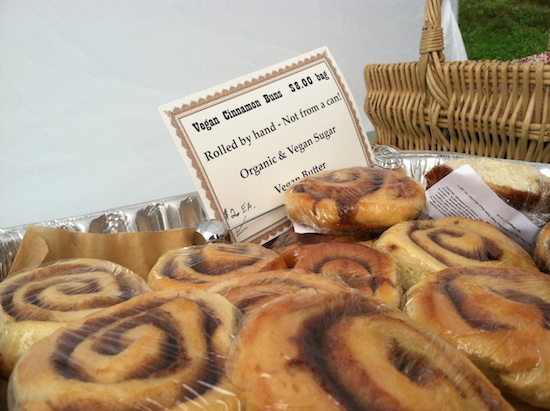 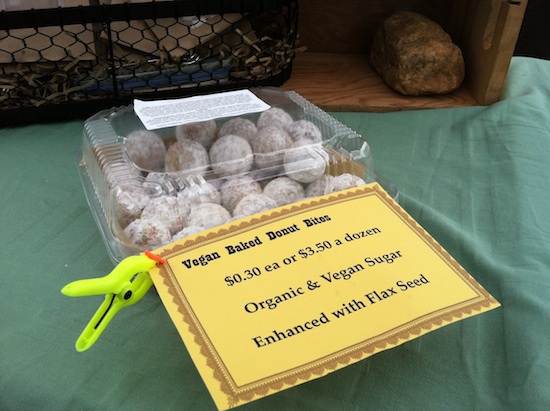 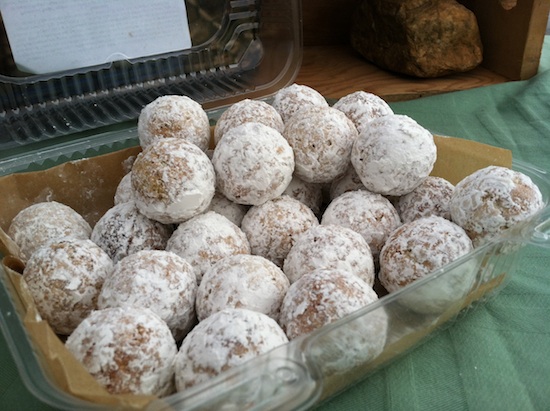 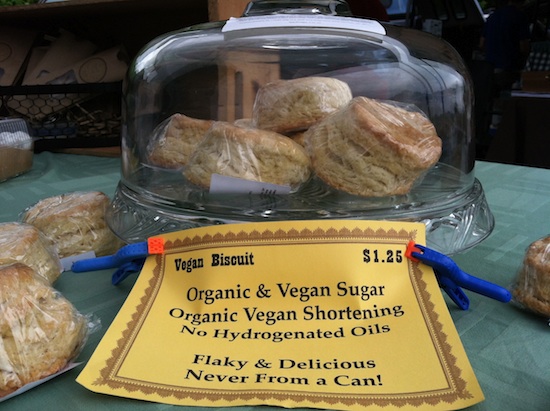 Are you drooling yet? ;) Believe me when I say that this stuff not only looks delicious, it IS so super delicious. I was fortunate to try a little bit of almost everything on the table here. Woo!! WIN!! :) But the real reason I stopped by was to talk to Jeannie, founder and co-owner of I Heart Veg. Once again, I hit “record” on my iPhone and we ended up having one of the most inspiring, moving conversations I’ve had while on the entire road trip so far. Oh man, I’m getting goosebumps just thinking about it! :)

ABOUT I HEART VEG

I Heart Veg is a vegan owned and operated bakery based in Asheville. Currently, they do not have a storefront but they are available for orders seven days a week, nearly all day. Their products are free of hydrogenated oils, transfats, and cholesterol. They also require signed statements from each one of their suppliers, verifying that all the products they purchase and use are 100% vegan and cruelty-free.

Their grand opening was this past February. The owners, Jeannie and her husband Loren, moved from Illinois to start I Heart Veg specifically in Asheville. They did a lot of research on where in the country would be ideal for starting a new, vegan business. Asheville kept popping up. She said, “There is a real entrepreneurial spirit here. People want to do their thing, grow their own food, and are community-driven. The community itself is very diverse and is very open to try new things.” Asheville, it seems is like “a little pocket of progressive open-minded people who want to do good for the earth, for the community, and support small, local businesses. It’s also incredibly beautiful here. If you want to be [in Asheville] it’s because you’re surrounded by natural beauty; there are a lot of nature enthusiasts here and that goes hand in hand with respect for nature and compassionate living. I love the people here. I adore them,” said Jeannie.

Even though Loren and Jeannie do not come from non-culinary backgrounds (design and marketing, respectively) they had talked about opening a joint business at some point. Before becoming vegan they were taking baking and cake decorating classes. Once becoming vegan they learned how to veganize their favorite, home-style baked goods.

“Our goal is to prove that you don’t ever have to feel that you’re missing anything, while living a vegan lifestyle. We create food that you grew up with, [like] vegan biscuits that taste like buttermilk biscuits, but without the milk or butter. Proving that you can still eat all those things that make memories. Food is about memories. Those are special moments that people allow you into when you make them food, and you can still have those things. It can be beautiful, delicious, AND compassionate,” Jeannie said. 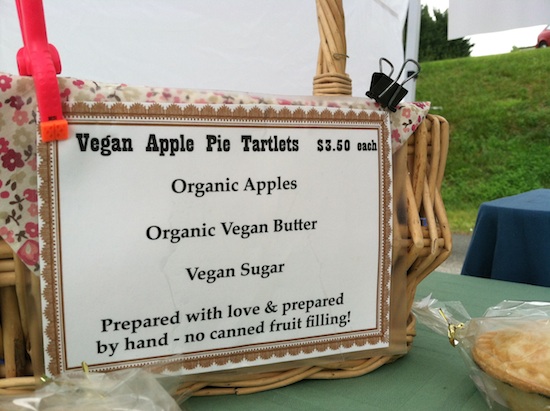 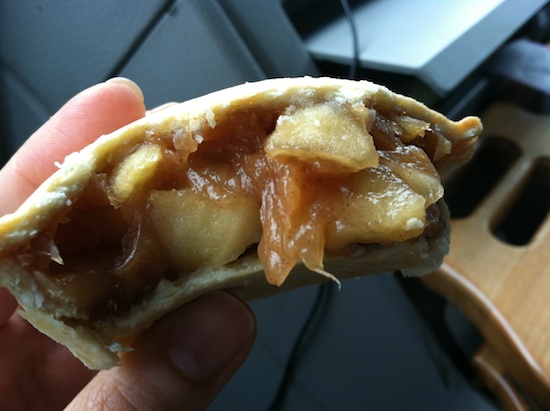 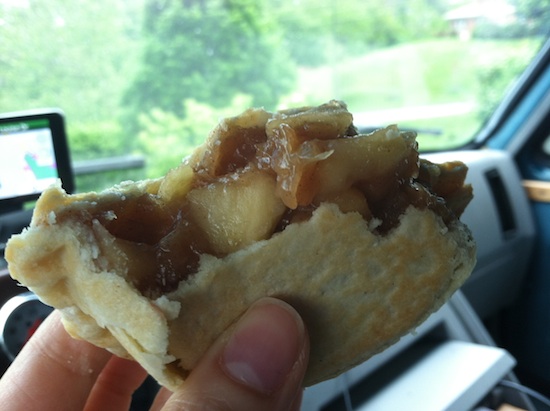 I’m not a huge apple pie person but THIS, ladies and gentlemen, THIS apple pie tartlet will SCHOOL your tastebuds. It’s Ah-mazing!!

WHY SHE WENT VEGAN

Growing up Jeannie’s family were strict meat eaters. She said that she felt that choosing to stop eating meat wasn’t an option at that time, though she had been considering it on the regular. Later in life she became very involved in animal welfare causes and rescue groups. As she and her husband became more and more involved in such causes they began to learn more about the cruelties going on, not only among companion animals, but with the animals that society has deemed suitable for consumption. She said, after watching a ton of related documentaries I realized that “I don’t want an animal tortured and killed in my name.” It was New Year’s Eve when Jeannie and Loren decided to become vegetarian. They struggled for a little while to overcome the hump from vegetarian to vegan, but on the eve of another new year, they chose to become vegan and have never looked back. “I think it comes down to what you want for your future and the statement you want to make about your life. I want to live a compassionate, loving life…” said Jeannie. “There wasn’t one specific incident [that caused me to finally go vegan], but just an accumulation of knowledge and participating in investigations of [companion animal] cruelty cases.”

“If I serve somebody a vegan cinnamon bun and they love it, that’s one meal that an animal did not suffer, one meal that [the person] loved and they now can say, ‘hey I’ve tried a vegan treat and it was great.’Food is love and everybody has to eat and everyone needs love, and when you combine the two it’s powerful and it can do things, it can create a movement in itself. Then people start asking questions and it starts a ripple that I don’t know where it’s going to end up, but I had a role in that, and that’s really powerful to us,” said Jeannie.

Jeannie left me with an awesome, and incredibly timely quote about why she and her husband NEEDED to start their business, and why others should make the choice to follow their grand dreams too: “If there is something tickling you in the back of the head, there’s a reason.” Indeed. ::hearts:: 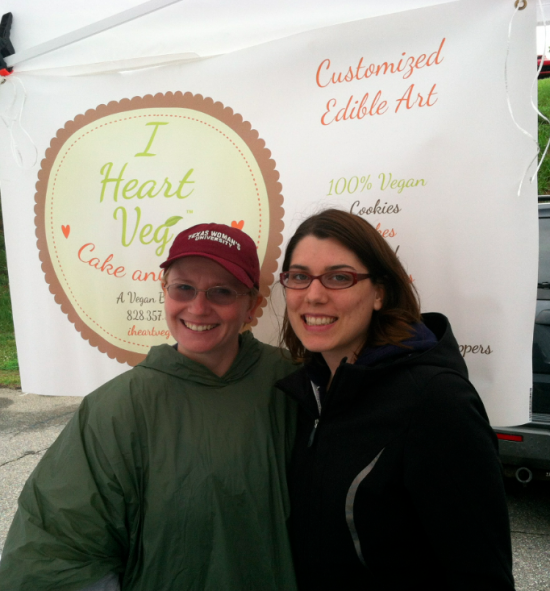 Jeannie and Kristin at the Asheville Tailgate Market

Jeannie, thank you so much for an incredibly inspring and uplifting chat. It’s exactly what I needed mid-journey. It was an honor to meet you and I can’t wait to watch your biz grow and flourish in light of your passion!! xo

Before leaving town I decided to visit one more mostly-vegan restaurant downtown, Green Light Cafe. As you could have guessed, Green Light Cafe is green! And I mean the color scheme. Very cute. 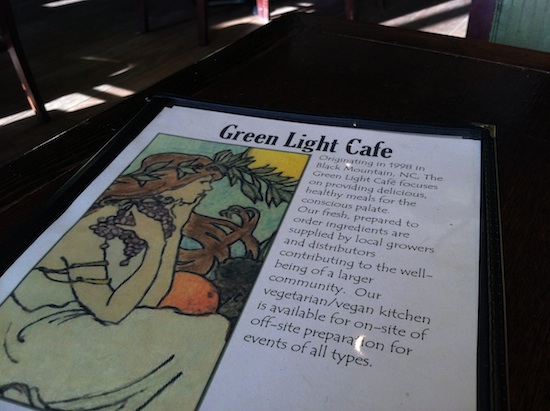 I had the spring rolls, which were excellent (they look cool too, don’t they?!) – very light and fresh, had a little kick, and the sauces were awesome too. I also had the butternut squash pizza which was very nice. 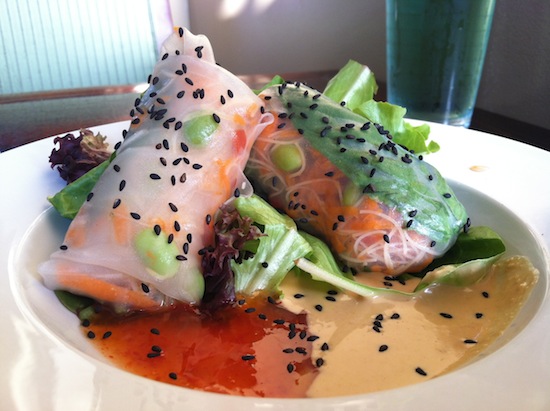 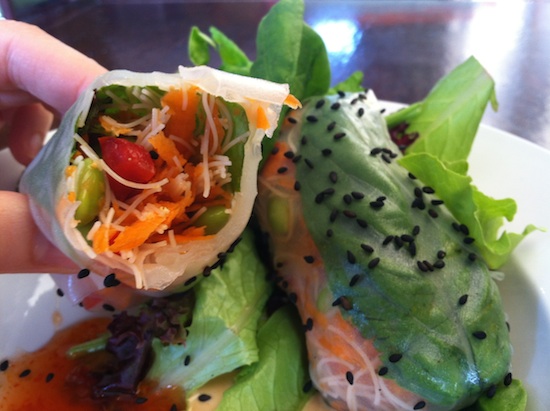 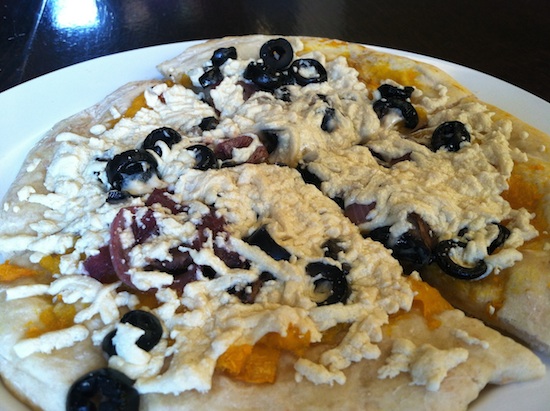 Before I close out on Asheville I want to give a few shout outs to some other cool stuff in town, or nearby, that’s worth checking out:

The Asheville Vegan Society – They were awesome in making restaurant recommendations for me and connecting me to some of the local veg folk.
Goat Mountain Ranch Sanctuary – A few of the folks I met in Asheville recommended this sanctuary; they’re doing a lot of great work!
The Hop –  Offers some vegan ice cream options. I did stop by. It was pretty good (but I’d just go get the homemade deliciousness at Plant ;)
Veg-in-OUT – Specializes in bulk vegan meal delivery throughout western North Carolina.
VegHeads – Drive-thru/fast food restaurant, offers vegan food stuffs.

From what I understand “vegan” is common knowledge throughout Asheville and most restaurants have vegan meal options. It’s an awesome place, when you visit, have a blast and eat your heart out!! ;) 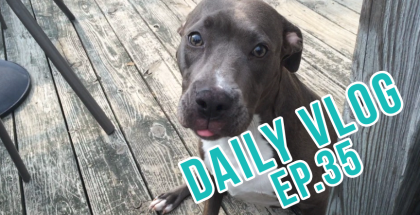