I’m excited about this post. Mostly because it brings back some great memories from my time in Richmond. I was only there for a few days but within those days I was able to spend some time with my Aunt, Uncle, and Cousin who reside just outside of Richmond. And I met up with a super motivated vegan and VCU student named Joe. We had an awesome conversation about work, education, doing what you love as a career instead of a side project, and a bunch of other things thrown in there. It was super enjoyable. Not to mention street parking (when you got far enough away from campus) was free and plentiful. Plus, all of the restaurants on my list were within walking distance to one another. Perfect!

Joe, the super talented, inspiring, and driven VCU vegan, suggested that we meet up at the Harrison Street Cafe. I had already eaten there for breakfast earlier in the week, which is why there is one extra food pic, but I was happy to go again. :) 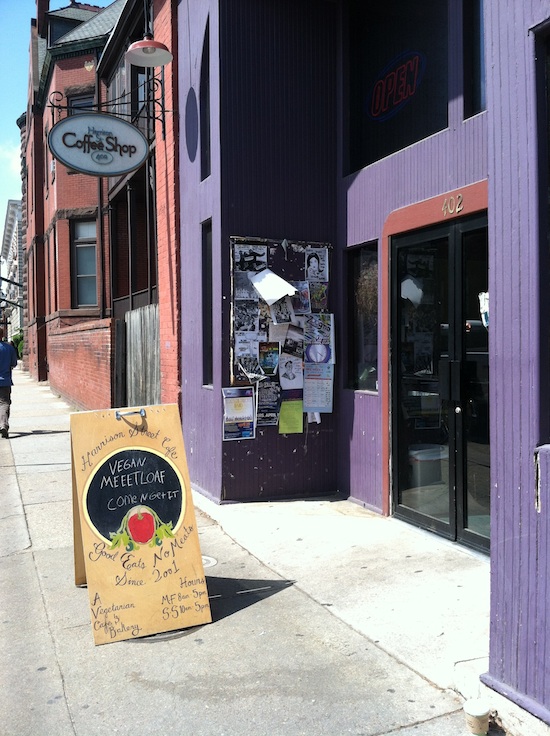 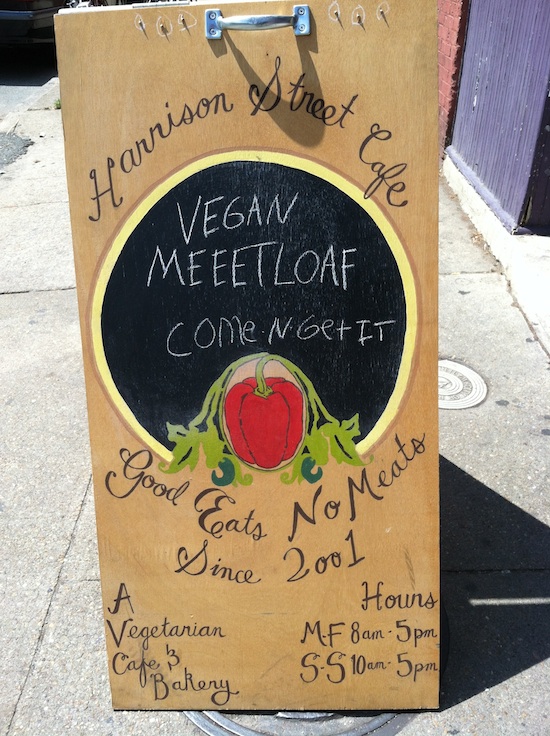 The first time I stopped in was to grab breakfast, do some work on my computer, and plan the rest of the day. So, on this morning I got Harrison’s vegan french toast sausage. It was great! 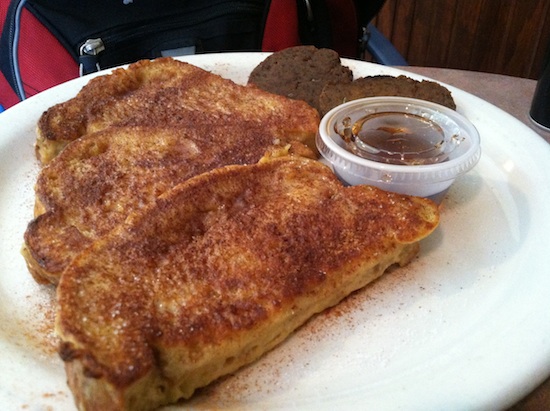 Then when I went back with Joe, upon recommendation, I had the Beer Battered Tofu Steak. It reminded me of a fish fillet of sorts. Between the healthy bun, vegan mayo, and deeply flavored tofu, this was one heck of a sandwich! I had a side of mac ‘n’ cheese which was great too. And Joe had a…. was it a black bean burger? I’m not sure. Hey Joe, do you remember what it was? :) If I recall correctly Joe has a bit of a coffee addiction ;) so he goes to Harrison St. Cafe often. Aside from the coffee though he highly recommends the food. Good stuff. :) 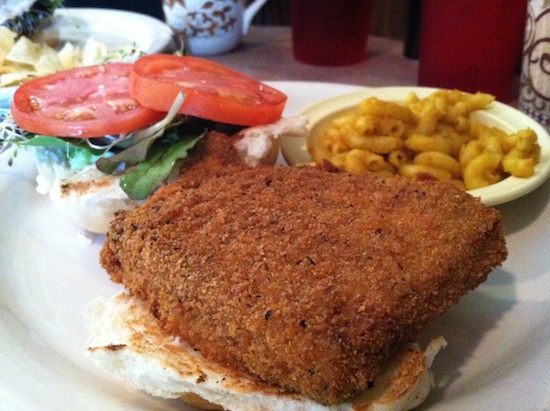 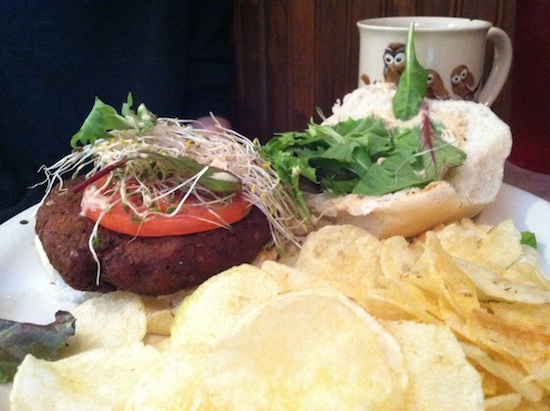 One of the following days I was on the hunt for the elusive vegan food carts in Richmond. I was having a bit of trouble nailing down their hours and actually, on THIS day I had read somewhere that they were going to be closed. But I decided to go to their designated parking spot just in case luck would be flowin’ my way. And wouldn’t ya know, two out of two vegan food carts were just where they said they’d be AND they were open. Score!

On my walk to the food carts I discovered some neat sidewalk “art” and then bumped into this complementary intersection. 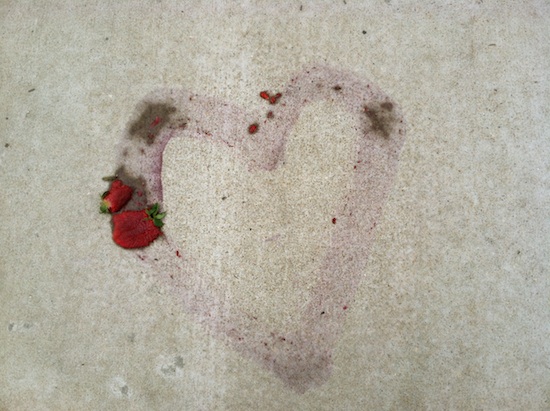 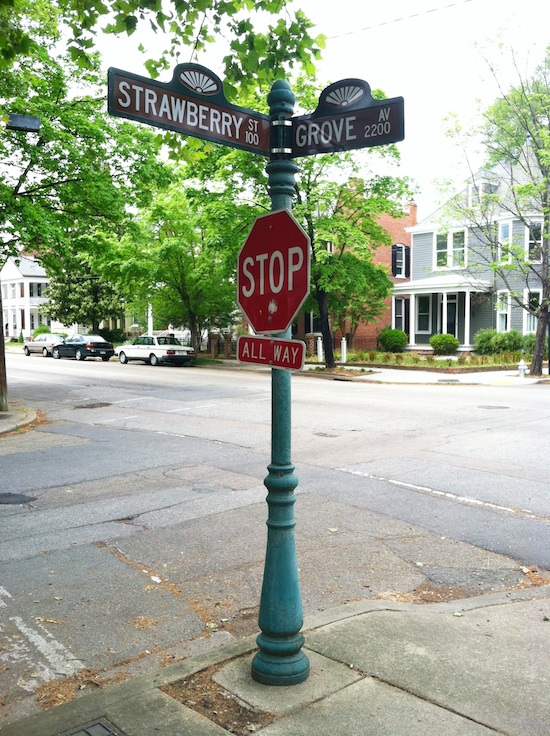 Located directly next to one another, you can’t miss these two hot pink food carts, each packin’ some vegan goodness!

RVA Vegan Food Cart had four items on the menu this day. I tried three of them. :) I had one soft shelled taco, a tamale, and a cupcake. Now that’s a well balanced meal if I ever heard one. The taco was stuffed with onions, peppers, beans, and corn. The tamale was pretty spicy and delicious. The cupcake was of the Pumpkin Spice variety and it was excellent! It was moist and just pumpkin-ey enough with a bit of spice, and just the right amount of frosting. I tend to need a fine balance between the cake and the frosting on a sweet. If there’s too much of either, I can only get through a portion of it because I have to ‘manufacture’ the balance myself. (wow, I sound silly ;) But this cupcake didn’t need any readjustments. I gobbled it up in no time. And it…was…gooooood. 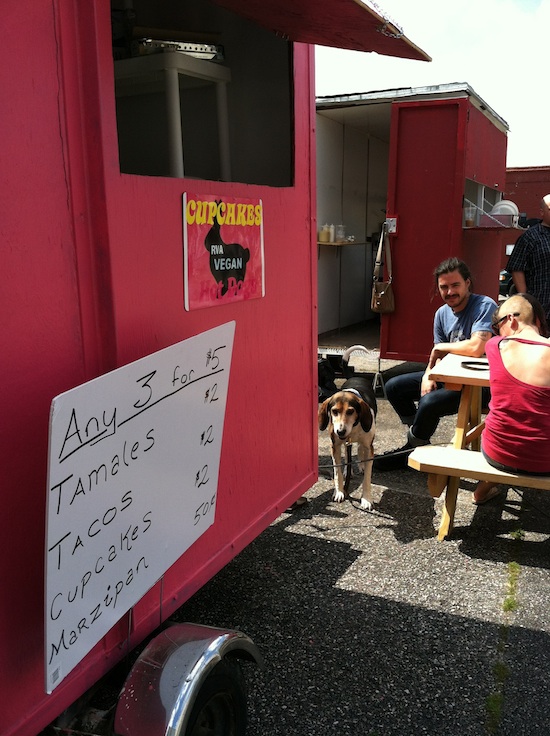 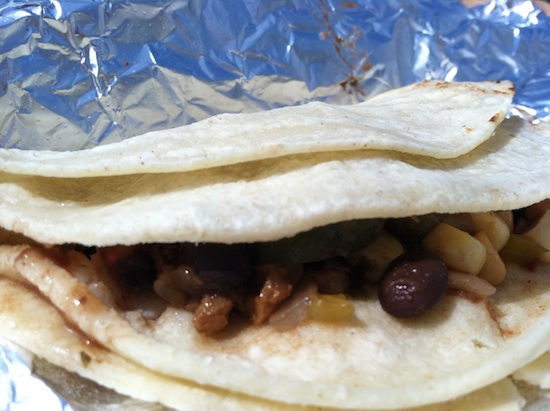 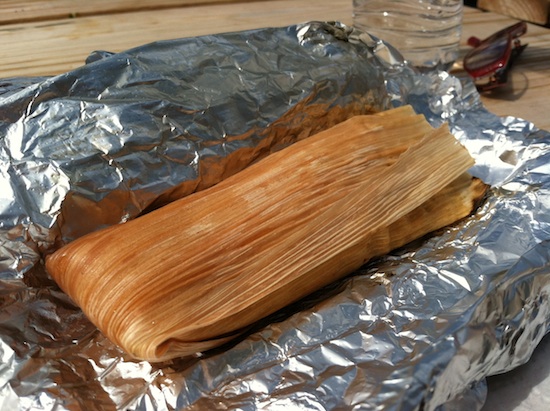 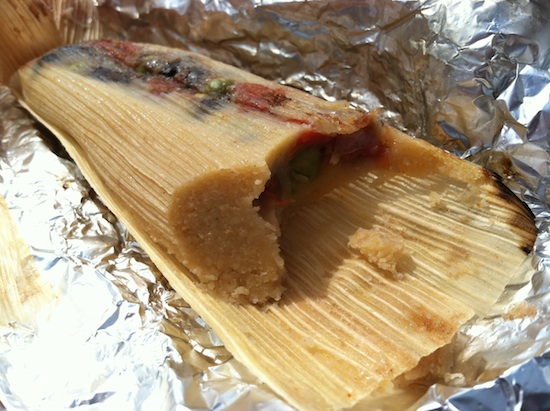 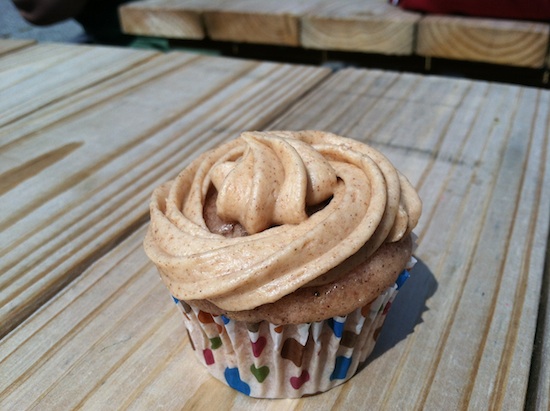 The following two pics are from the Rooster Cart. They offered four different sandwiches and four different sides. I had just finished the food from the RVA Vegan Food Cart so I was full, but I really wanted to try something from Rooster. So, upon recommendation by those working I got the Euroboy to-go.

Rooster Cart’s Euroboy is a vegan oyster po boy sandwich with a curry carrot coleslaw, pickles, cabbage, and sriracha. Um. I’m sorry. Vegan oyster???? I was unsure but later that night when I unwrapped this little devil…HOLY WOW.. THIS SANDWICH IS AMAAAAZZZING!!!!! Even being a little soggy (having sat for several hours after being made) it was still crazy delicious. There was some kind of rich, creamy, mayo-like sauce soaked into every crevice, enveloping itself around each and every delectable bite. This sauce is **bleeping** incredible. Not to mention the contents when placed all together in a single bite. Someone save me. OMGawsh. This is possibly one of the best anythings that I’ve ever eaten. It was spicy, salty, tangy and so, so, so rich in flavor. It was perfectly balanced with all of the ingredients and I cannot wait to have it again. Sometime. I hope. ::sheds tear:: 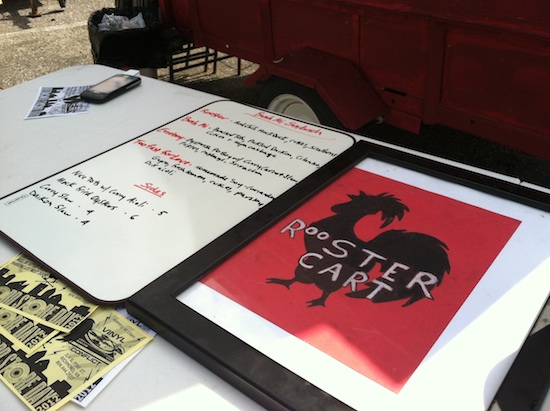 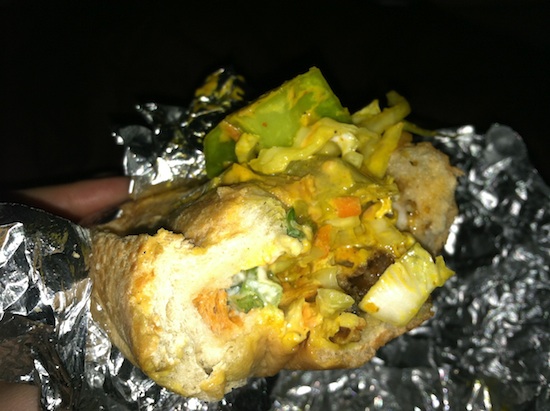 Moving right along, I’d like to introduce you to one of my all time favorite restaurants in Virginia: Fresca on Addison!

The staff here is super friendly and the decor is really cute. They’ve got some ready made to-go items in a cooler and in a forward facing display case, and all but two items on the menu can be made vegan. I like that they have a smallish menu. In my opinion, and from what I’ve seen since being on the road, having a smaller menu, in a way, guarantees that the food will be good. I’m serious! In almost all cases of small-menu-syndrome (I made that up) the food has been outstanding. 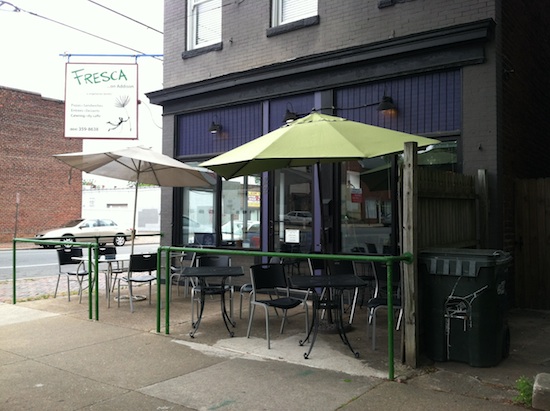 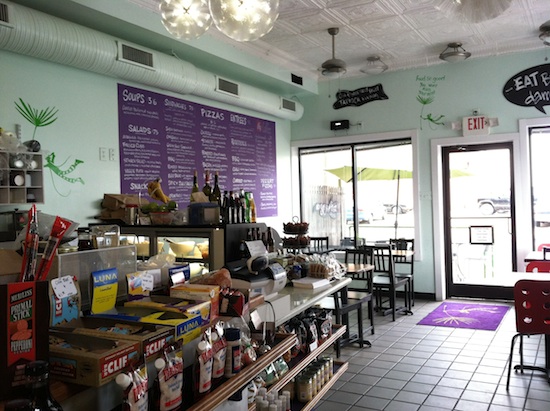 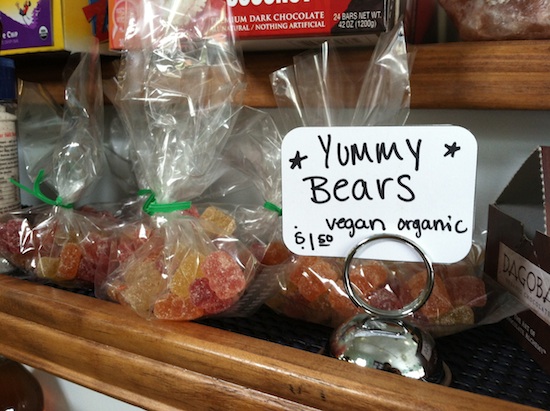 I started with this delightful Curried Butternut Squash Soup with coconut milk and toasted almonds. It was truly delicious! It’s a teeny bit spicy, has almost a buttery flavor, and I just love the shaved almonds. Perfect for chilly weather or overcoming a cold. It just warmed me up and made me feel all cozy. Would have loved to snuggle up in a blanket with a cup of this soup. Mmmm. NOMS. 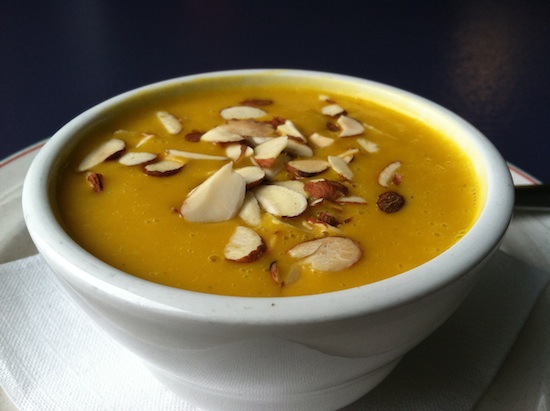 I had a nice chat with Jenna, who was working on this day and who I later learned is the owner of this amazing little place (Hi, Jenna!!! :) Anywho, she recommended that I try the Kale Pizza, which comes loaded with roasted red peppers, toasted pine nuts, and Daiya mozzarella. Wow! The first bite was all I needed to know that this is SOME pizza, man. Salty goodness, the kale was wonderfully roasted in garlic, the crust was nice and thin and not too crispy. The tomato sauce was just sweet enough, I loved the big chunks of garlic, and found everything to be well balanced. 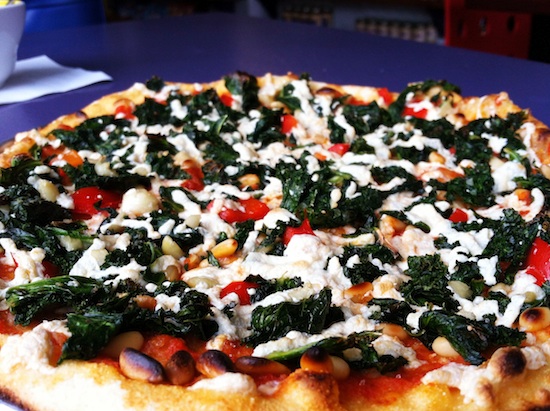 After sitting for a few hours, taking advantage of Fresca’s free wifi and comfy booth seating, I decide to get a Lemon Cupcake. Yayz! It was marvelous and like the one I had earlier in the week, was well balanced on the cake vs. frosting front. Mm!! 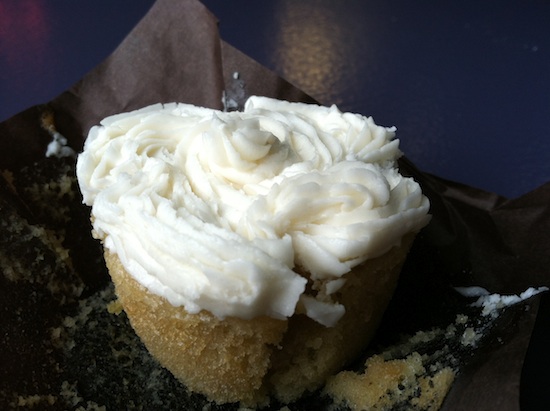 The folks at Fresca are friggin’ brilliant. They make dessert pizzas!!!! Have you ever heard of such a thing? Amazing!! The one that I tried, which I picked up later in the week on my way out of town, is covered in peanut butter, bananas, and chocolate chips. Um. Heck yeah!! Honestly, I was a little uncertain…this much sweetness on pizza dough? But honey, oh sweet honey, this pizza is to LIVE for. The only words I could muster (to write down) while indulging in my first slice were “brilliant, creative, marvelous!” 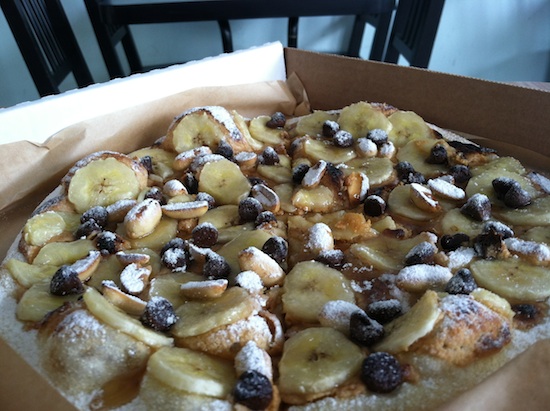 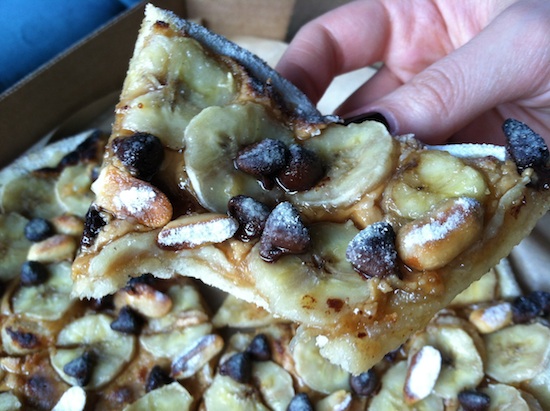 Richmond surprised me with its assortment of vegan noms. They’ve got some knock out meals, for sure. Got any Richmond faves of your own? 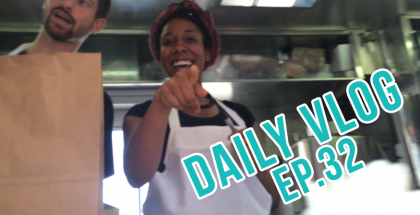 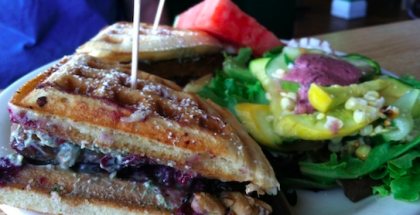