What You Never Knew About *This* Vegan Restaurant in Lockport, IL; Must-Try Thai in Chicago; & Some Late Night Takeout 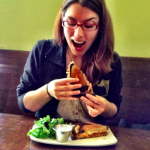 This is the last in my series of posts about Chicago. Please note that when I was in Chicago specifically for the road trip, these and the previously written about restaurants were the only all-vegan establishments at the time. Now that I’m back in Chicago (nearly two years later) I’ve learned about at least one new vegan restaurant (Kitchen 17) and am able to now open up to vegan-friendly joints, which has been an absolute joy! To see my current vegan Chicago finds, check out the @wtfveganfood Instagram account and/or the Will Travel For Vegan Food Facebook page. The last six weeks have been nothing but vegan foodie finds from ChiTown.. w00t! w00t!

Oh and if you’re wondering why your favorite Chicago-area vegan restaurant isn’t listed below, chances are I already wrote about it in one of the eight previous blog posts that cover Illinois vegan noms. :)

Now.. let’s kick off the last of my Chicago series with one of the very first road trip experiences that brought tears to my eyes and goosiebumps to my skin – meeting and chatting with Laurie Sloan, founder of The Vegan Cafe, Benefiting The Thanks Jordan Foundation.

On a brisk January afternoon Ethan and I sat down with founder and former-owner, Laurie Sloan to learn more about the Cafe’s foundation.

It all started twelve years prior, when Laurie was first diagnosed with cancer – the most recent three years of which she was battling stage four. She was in the middle of chemo therapy, clinical trials, and anything she could get her hands on in order to slow down or reverse her cancer.

Prior to – and during – her diagnosis Laurie coached marathon runners and was an ultra marathoner herself, running 50 miles a day during training.

After successfully going into remission she began to explore healthier food choices so that if the cancer returned she would have a more efficient, and preemptive plan of attack. It was, for all intensive purposes, a way to fight what ended up being the return of the painful cancer.

Laurie noted that she always thought she was eating healthy prior to her initial diagnosis and couldn’t understand why she kept getting more and more sick – believing that the food she was ingesting would help. So, she kept exercising regularly and with more frequency while incorporating more salads into her daily regime.

She also began coaching for a leukemia and cancer society and thought it would be a good idea to start a local non-profit to help people in her own community. She formed a group, initially with a close group of friends – including her mother. After a few years of planning Laurie filed the official 501(c)(3) paperwork for Thanks Jordan Cafe. It was perfect too because Laurie’s mother was a retired President of a local bank and agreed to handle the finances while Laurie and the others worked on developing other pieces of the organization. It would be a restaurant run entirely by volunteers with proceeds going to benefit the Thanks Jordan Foundation. 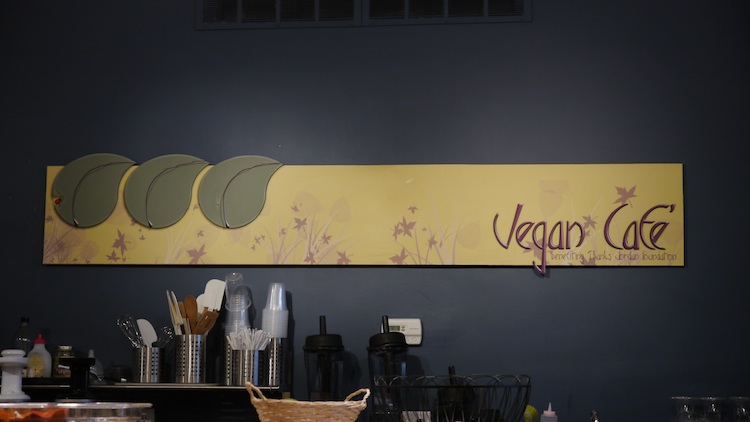 Almost immediately after confirmation of the paperwork going through, and getting the green light on their business plan, Laurie’s mom was suddenly diagnosed with the same cancer Laurie had been battling for years. She passed away just six months later. Two months after her mother’s passing Laurie was once again re-diagnosed.

In many ways this was the final blow for Laurie – it was time to buckle down and get serious about not only her own dietary choices but this Foundation she had started with her mom.

Laurie left her job in order to devote all of her time to the Cafe and to learn more about a raw foods lifestyle. Feeling lost and overwhelmed Laurie started noticing a car around town that she hadn’t seen before. The car had a bumper sticker that said, “Doin’ it raw.” Interest sparked, after seeing this car and bumper sticker around a few different places that week, Laurie courageously followed the car to its next location. “Don’t think I’m crazy,” she said to the woman who stepped out of the vehicle, “but I’ve got this non-profit in town and I’m thinking about doing this raw thing and taking a new direction…” Before Laurie could finish the woman said, “Ya know what – I stopped at your cafe the other day because I felt really drawn to it. In fact, I just signed up to volunteer. I start training tonight.” And guess who was scheduled to train her that very evening?! Laurie!!

That evening Laurie and her future business partner talked for hours about raw foods, about Laurie’s journey, and how the foods could actually heal her!

A short time later Laurie was diagnosed for the fourth time. This time it was with non-hodgkin’s lymphoma – which was a side effect of her previous treatments for the other form of cancer. This was it, her last shot at pulling through and making this new organization work – to help others. But, within 24 hours of her new chemical treatment she went from being in marathon running shape to completely crippled, unable to get out of bed. The chronic pain in her legs meant taking up to 15 minutes each morning before she could walk normally.

Seeing no other options she went the way of Gerson Therapy. Four days later (at thirteen juices and four coffee enemas a day), her excruciating pain was lifted for the first time in years. Everything the Gerson book said would happen, did. Without a fault Laurie experienced every aching and then relieving moment of this chemo-free Therapy.

Two months after working through the Gerson Therapy Treatment Laurie went to see the doctor who had been treating her, over the years, throughout all of her bouts with cancer. He was shocked to see that all of her numbers were cut in half. Instead of being supportive Laurie’s doctor “fired” her as a patient since she was no longer following his protocols.

Since then Laurie has chosen to no longer partake in conventional cancer treatments. She also stopped going in to get tested, to check on the progression – or lack thereof – of her cancer.

I remember reading something Kris Carr once wrote about this too. She chose to continue going in for progress tests – despite her decision to forgo traditional treatments, opting for healing dietary choices over chemo – and she had noted that she did this mostly to prove to her Doctor that there are other treatments; hoping s/he would be open to helping others with alternative methods as well. But for Laurie she felt hurt by her Doctor’s response and simply opted out altogether.

Since then Laurie has been celebrating life by giving back. The Cafe’s mission focuses on helping humans, promoting plants, and highlighting animal welfare through way of monetary support. At the time I sat down with Laurie the Cafe had only been open for about eleven months. It’s been nearly two years since that day – so I messaged Laurie recently to check in. Here’s what she had to say:

I still have not gone to the doctor [to check numbers or see how the cancer is doing; but] I am doing great health-wise. [The] hands of [the] cafe have changed and [the new owner] still donates, however it is a for-profit [now]. I am still there (at the Cafe) and volunteer more often now and love it since I get to do my mission and worry about the other things [too].

That’s great, Laurie! We’re so glad to hear the Cafe has continued on and that you’re still healthy as ever! Thank you so much for sharing your unbelievable story with us – it has forever stuck with me personally, on so many levels. xoxo

Are you ready to check out the incredible Cafe and food that Laurie helped establish?! Check out some mouth watering pics below and then head on over to The Vegan Cafe in Lockport, IL (just a short drive from the city of Chicago!). 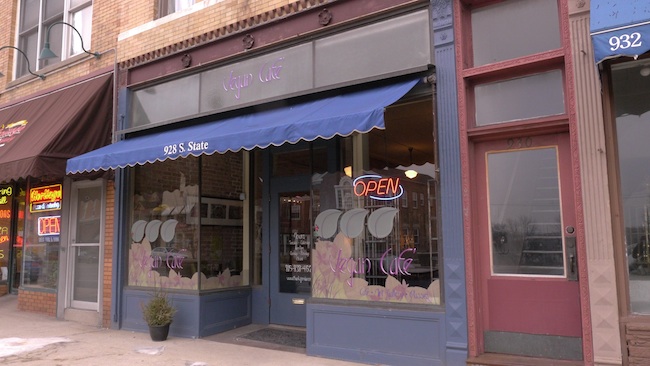 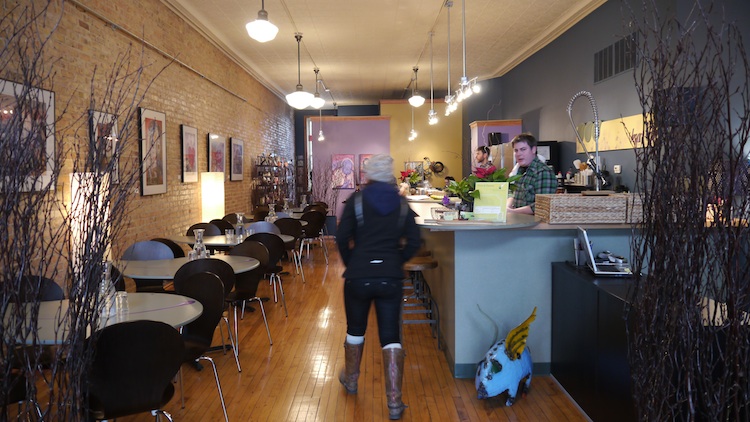 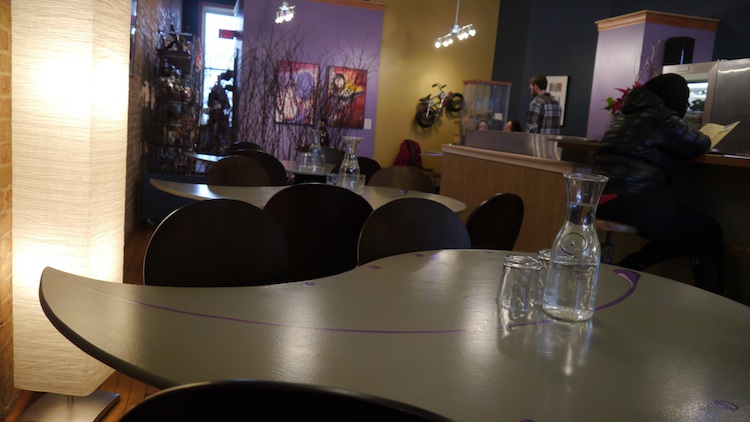 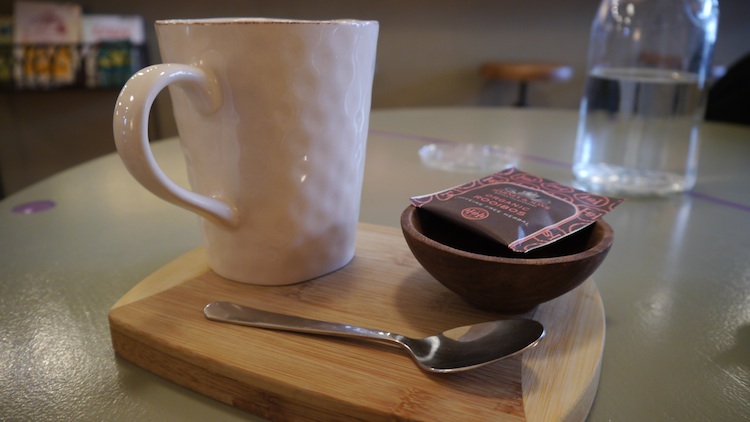 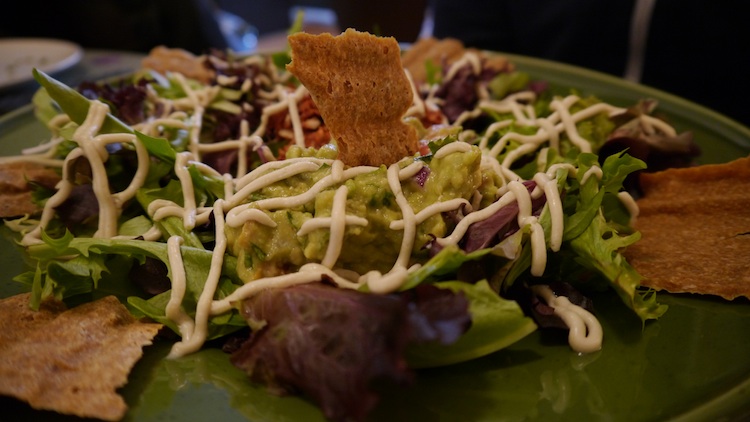 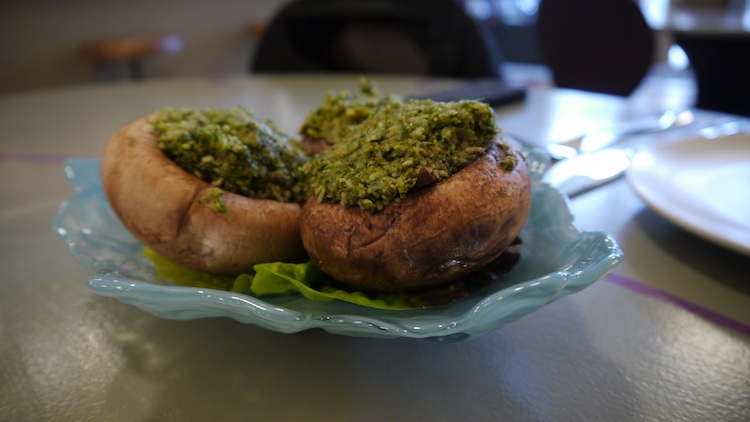 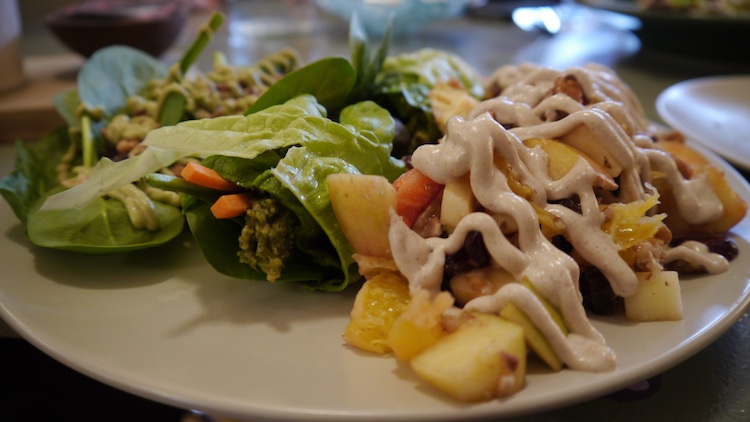 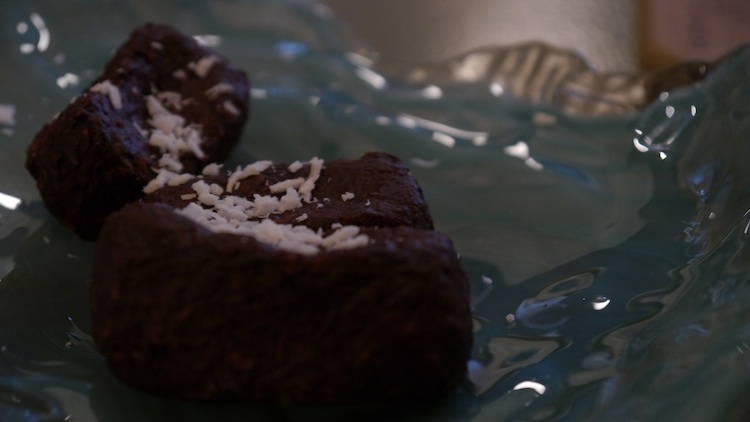 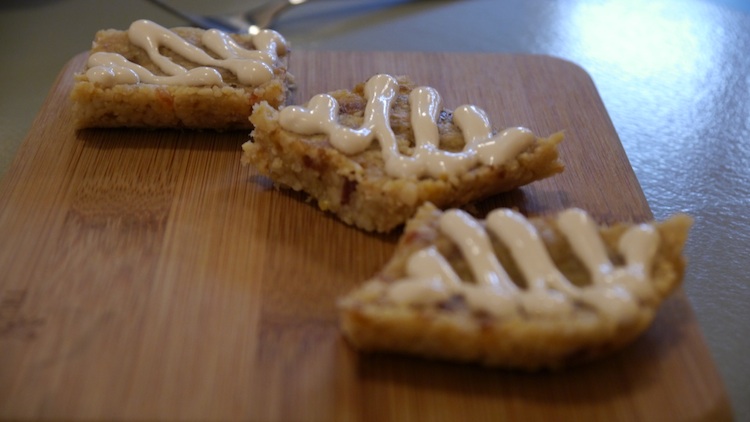 Next up we’ve got one of my favorite vegan establishments in Chicago – Urban Vegan, Thai Cuisine!

On this day we enjoyed a filling lunch, accompanied by Ethan’s mom and a friend of hers.  I think we ended up going at least one or two more times because it’s that good. 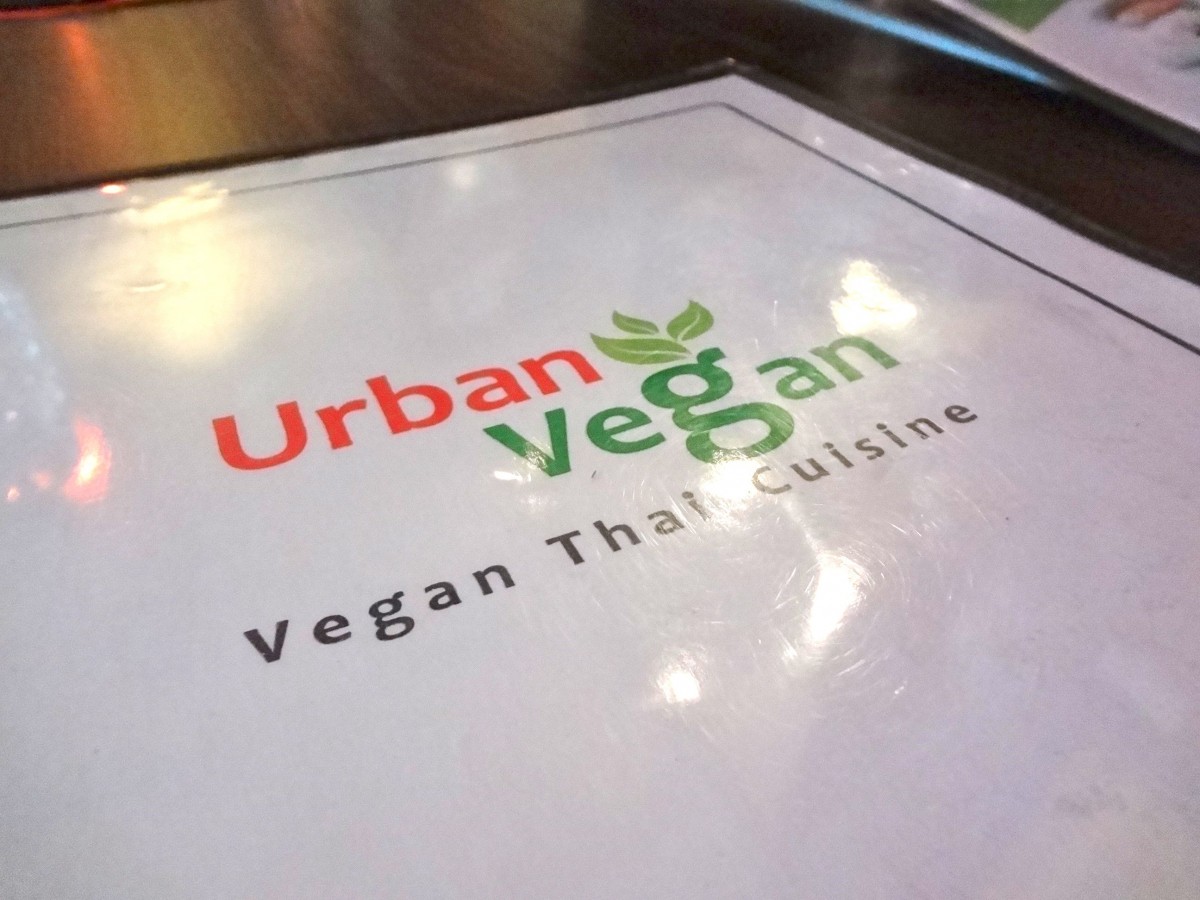 There are a variety of yumz pictured below, including: One of Urban Vegan’s lunch specials featuring a scrumptious vegetable curry, “seafood” tom yum noodle soup, some veggie tempura, a spicy eggplant seitan dish, the ever popular hot and sour soup, and finally – some veggie-filled dumplings. Daaaang, this is making me so hungz!! 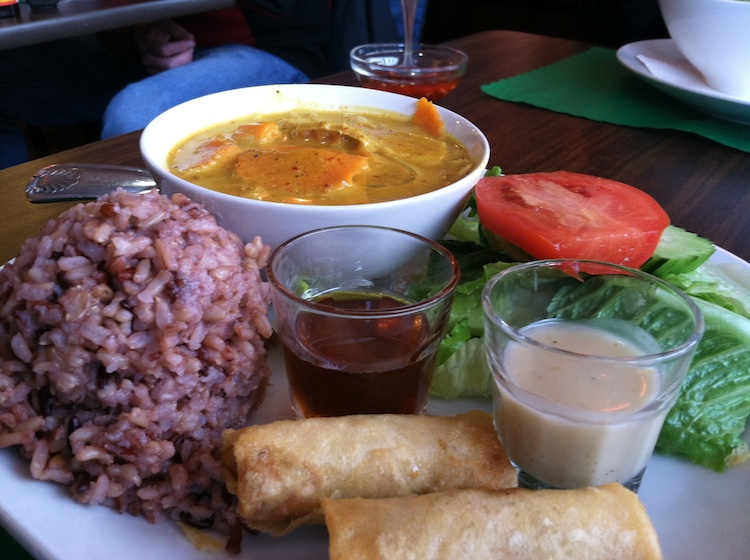 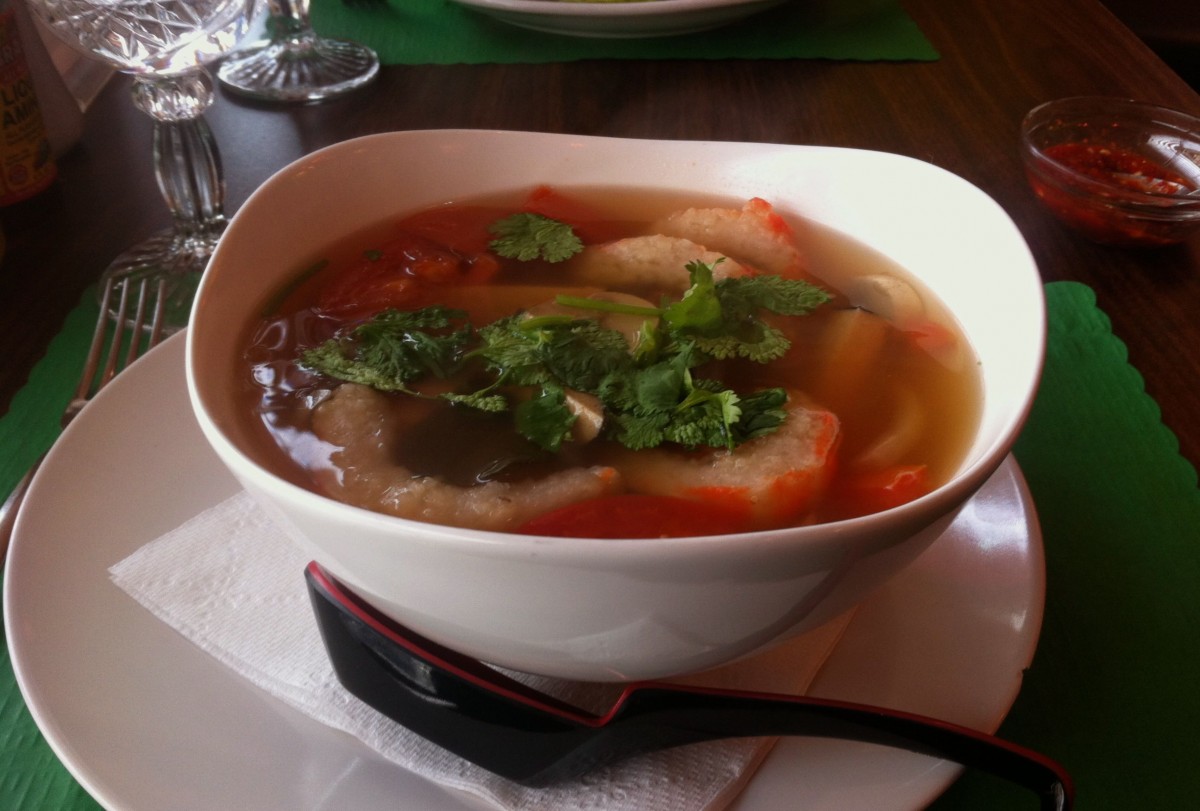 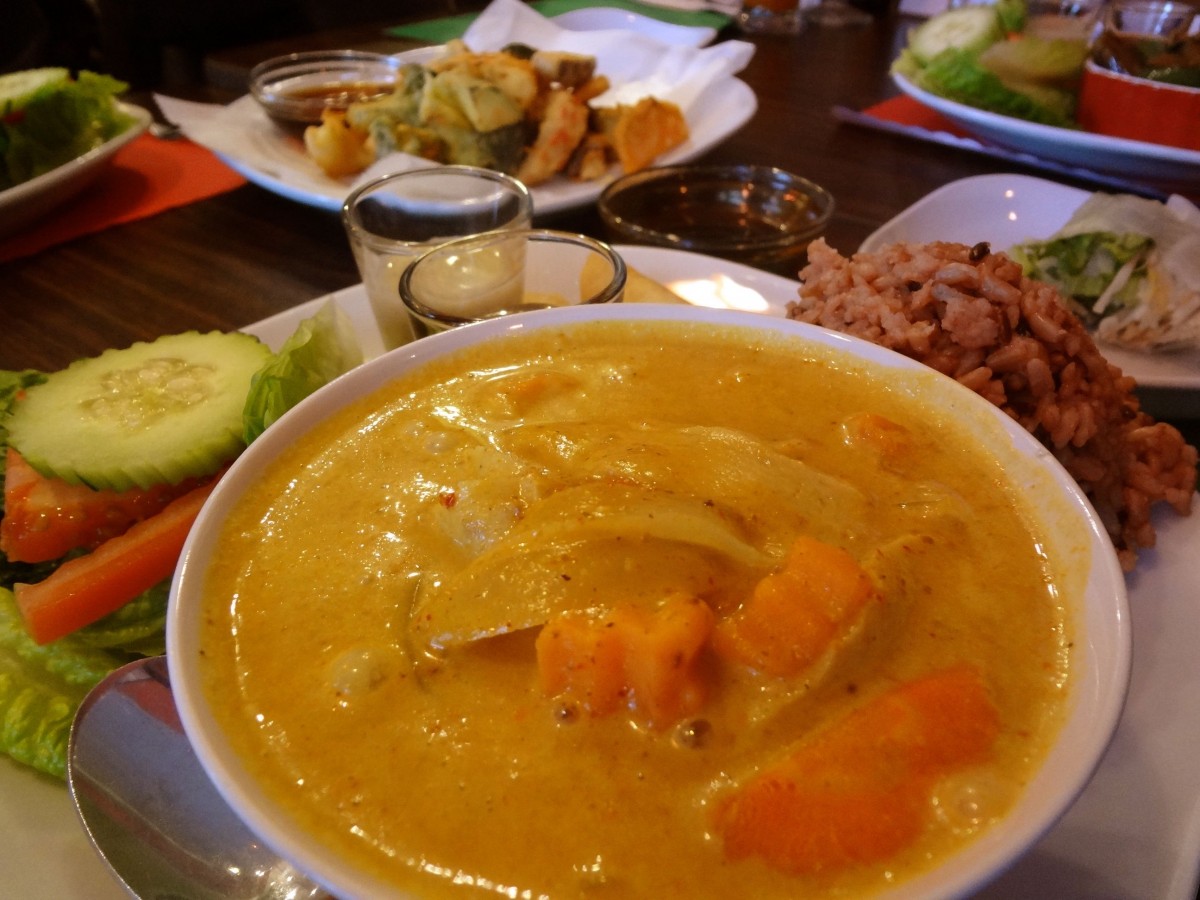 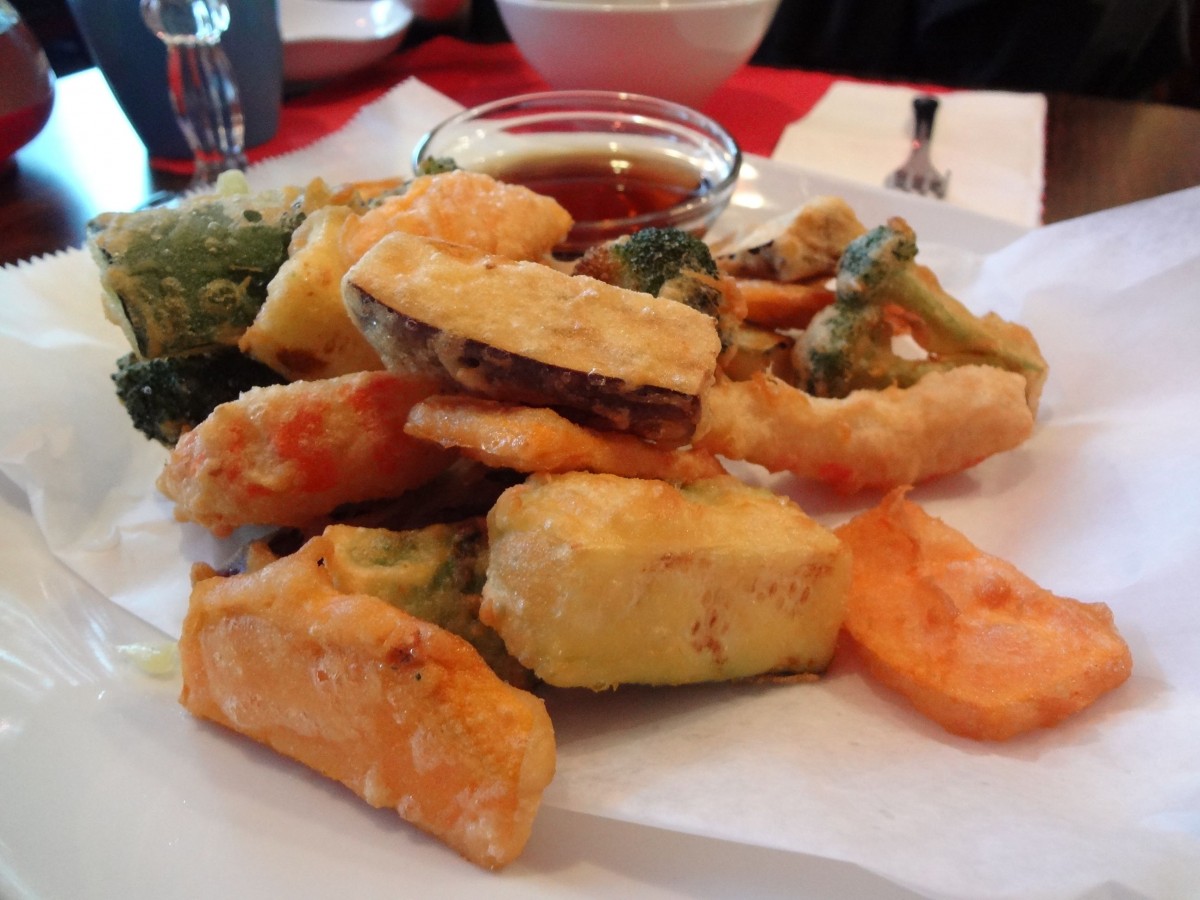 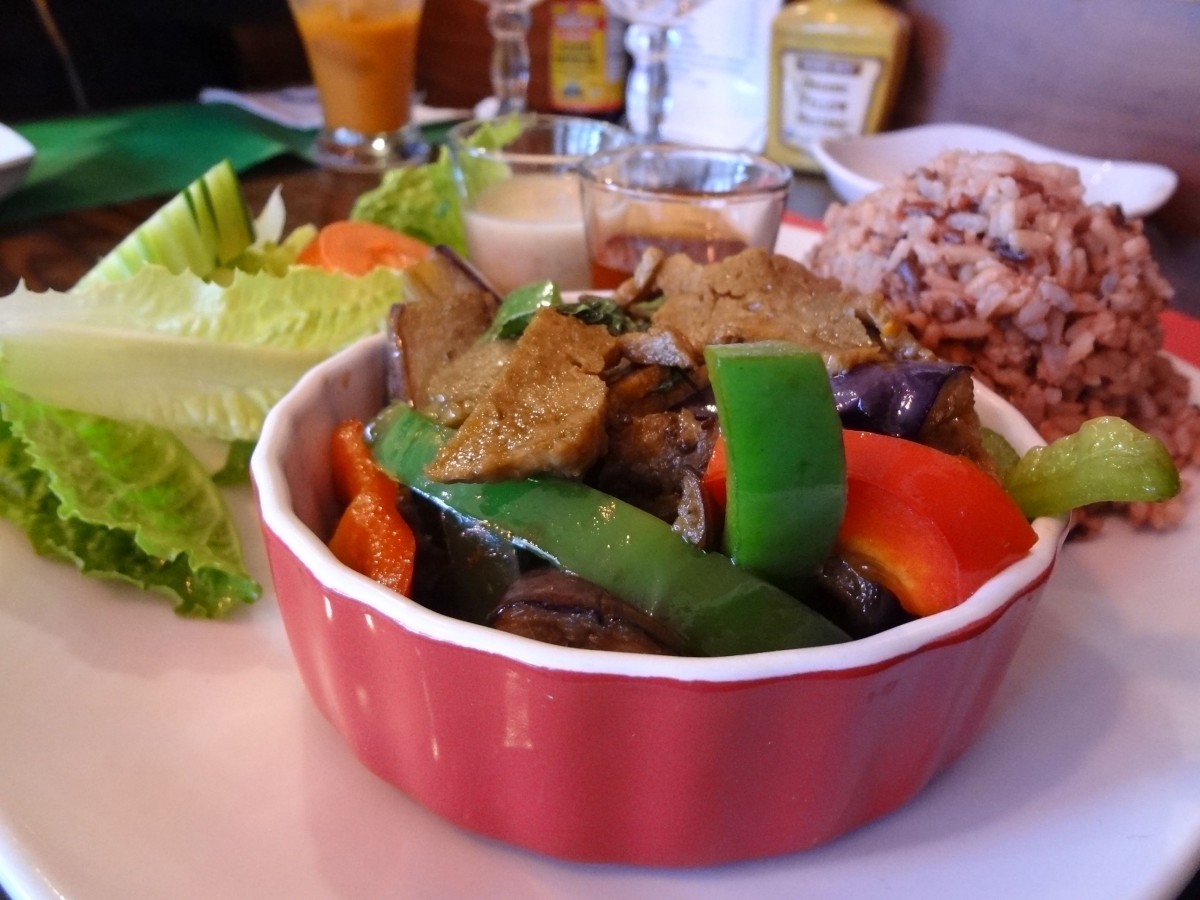 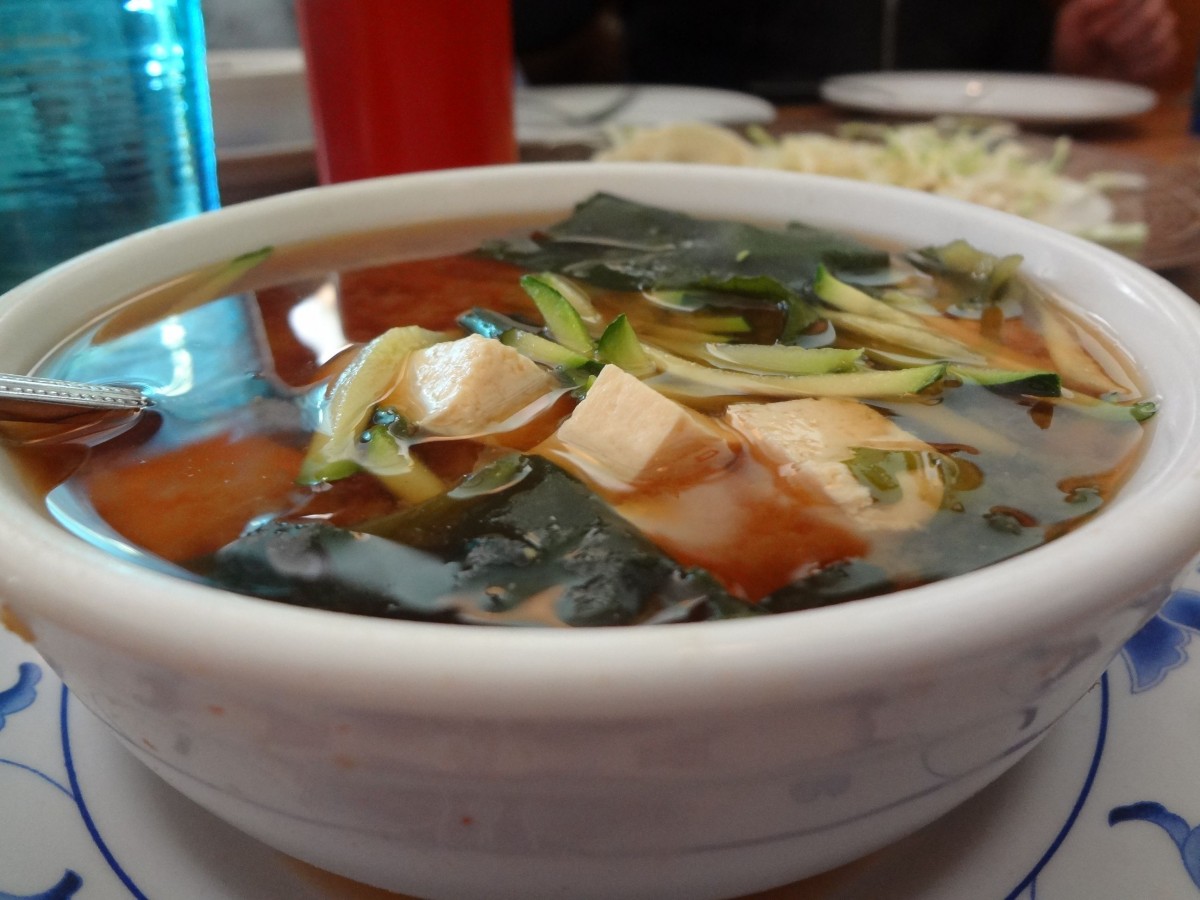 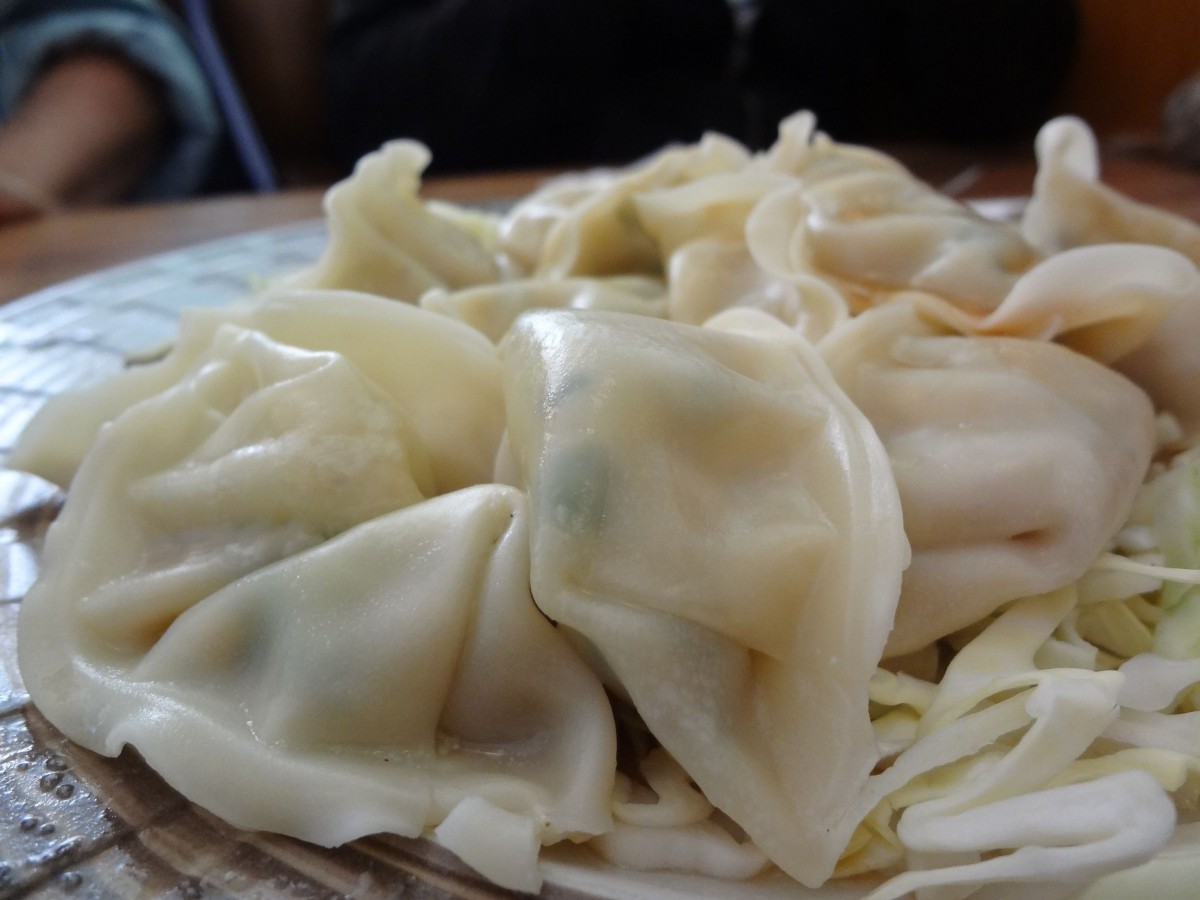 There we are with the owner of the restaurant (front, blue shirt), Ethan’s mom and her friend. The staff at the restaurant were all super nice, it was clean, appears to be well run, and the food – as I already mentioned – is fantastic. It’s definitely worth adding to your top five of Chicago vegan eats! :) 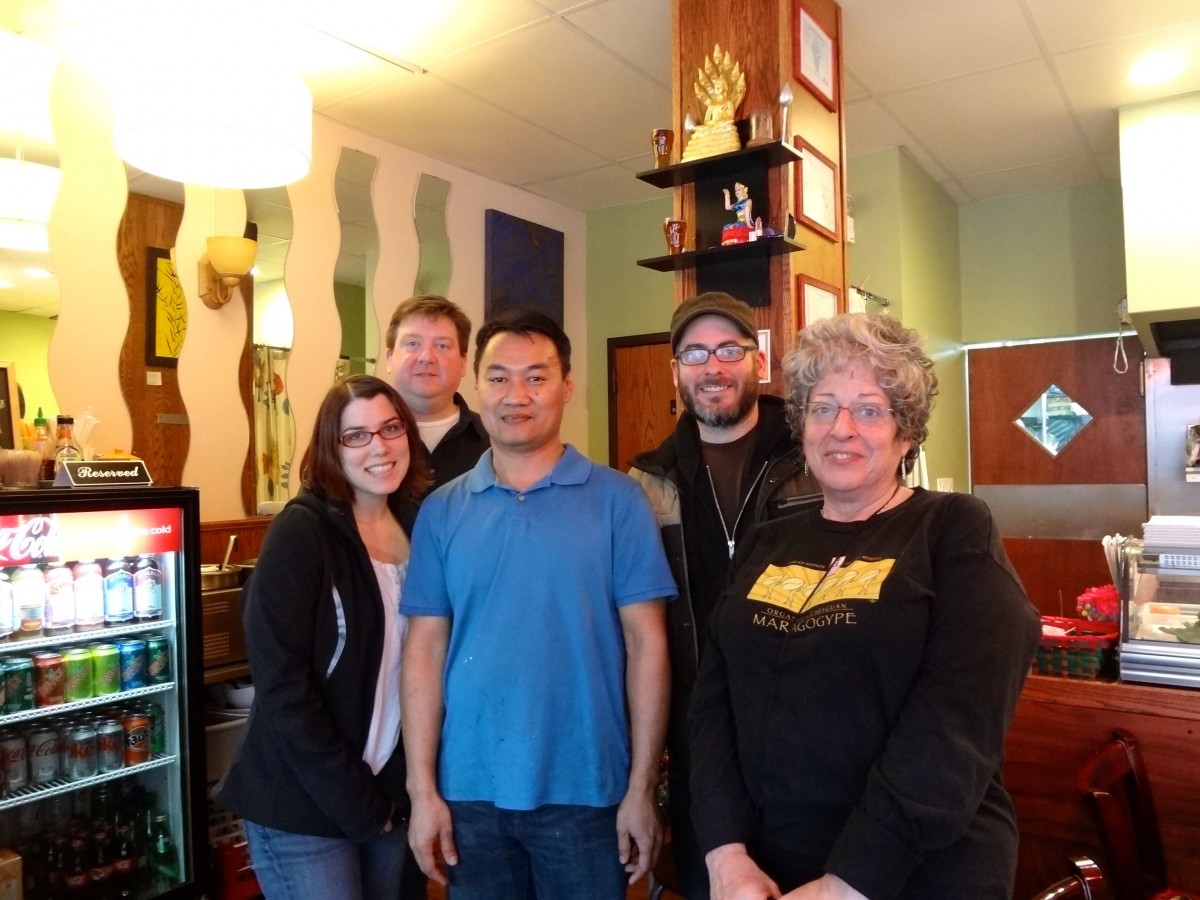 Finally, we enjoyed some takeout from Yah’s Vegan Cuisine. I honestly don’t remember too much about this one because, if I recall correctly, we had a pretty long day and this was likely one of our last stops – so we ate late and took last minute pics before scarfing it down. Looks pretty great though! 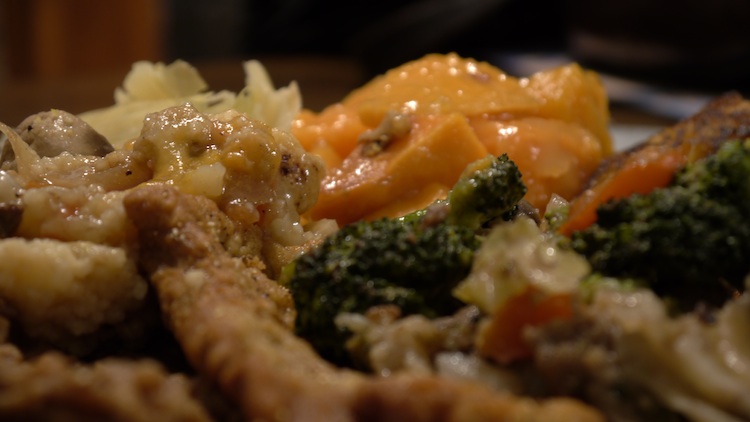 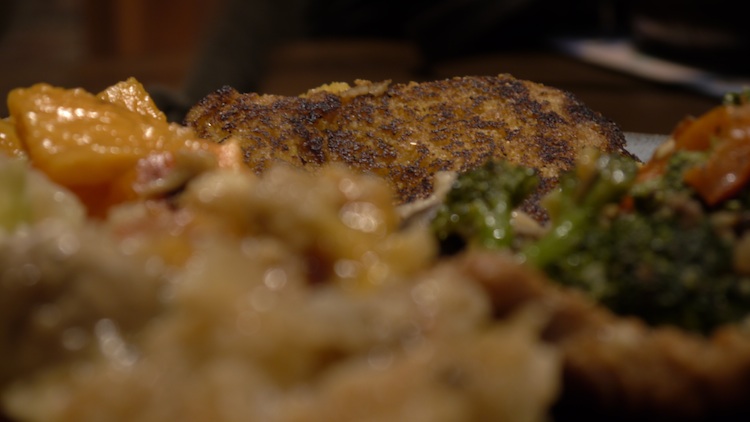 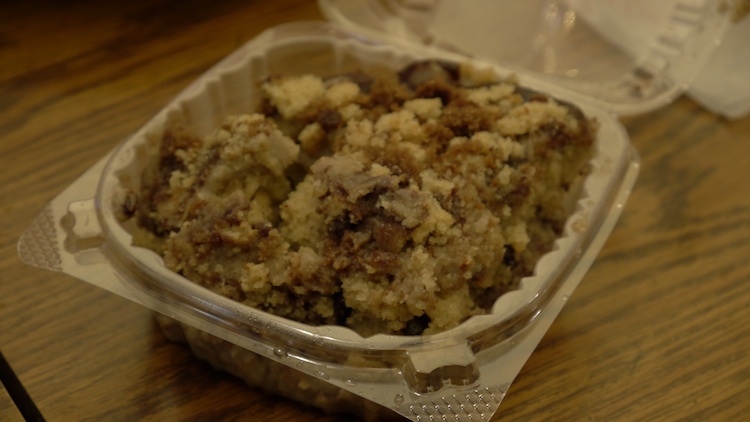 Did you miss any of the Illinois posts – or wondering if your favorite made the list? Click HERE to see all of the places Ethan and I stopped while traveling through Illinois, back in January 2012.

What’s your favorite vegan meal and/or restaurant in Chicago?

Will Travel For Vegan Food – Holiday Gift Set (2 Days Only) 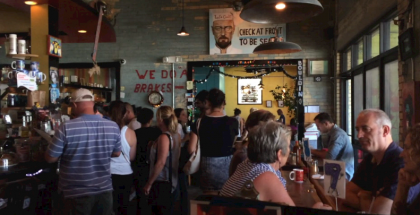