Cafe Evolution is the only all-vegan restaurant in the Northampton area. Technically it’s located in Florence, MA but it’s only a five minute drive from Northampton and about ten minutes from Easthampton. It’s in a pretty cool location too, they offer free off-street parking (which feels like a blessing in an area that’s strict on enforced, metered parking), and there is a dog training camp next door. So while you hang out you get to see doggies going in and out of the building next door. Yay!

I stopped in on three different occasion. The first time I got lunch-type food and hung out for a few hours because they have free wifi (if only there were more outlets so I didn’t have to sit at the kiddie table!). I returned later that night to pick up some cupcakes for my gracious spare bedroom hosts, and then popped in on my way out of town to pick up lunch-on-the go and more cupcakes for Adam and Aliza, who were going to be couch-hosting me that night.  Every time I was there this place was packed with customers. Awesome. 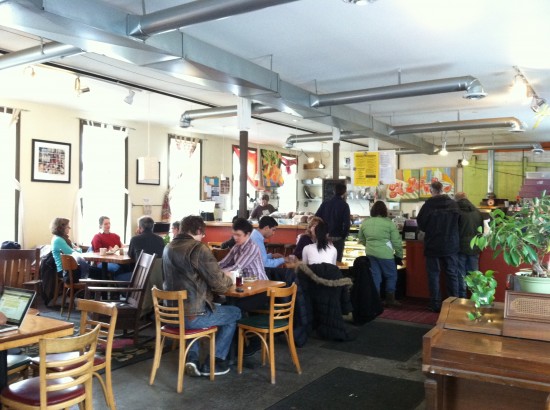 The vegan accessories throughout this place added a nice touch to the overall experience. 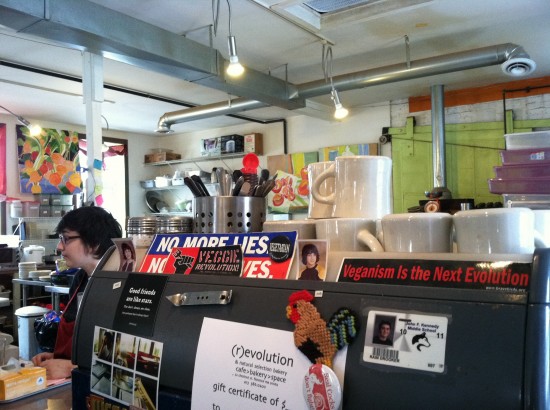 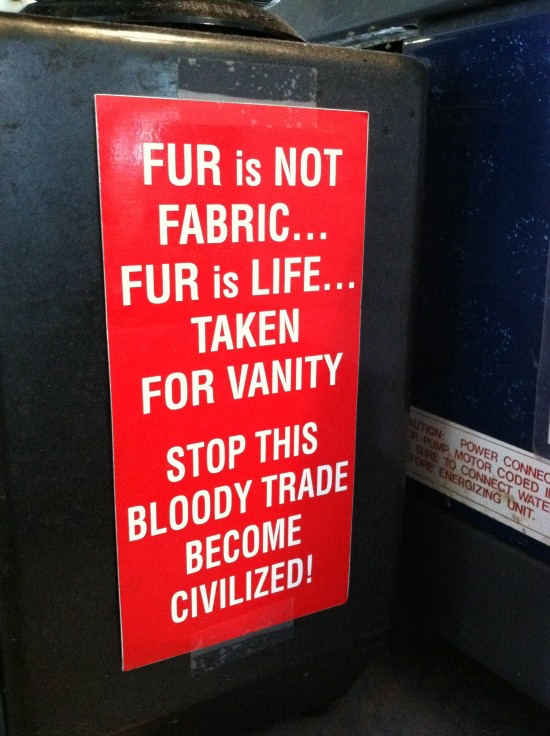 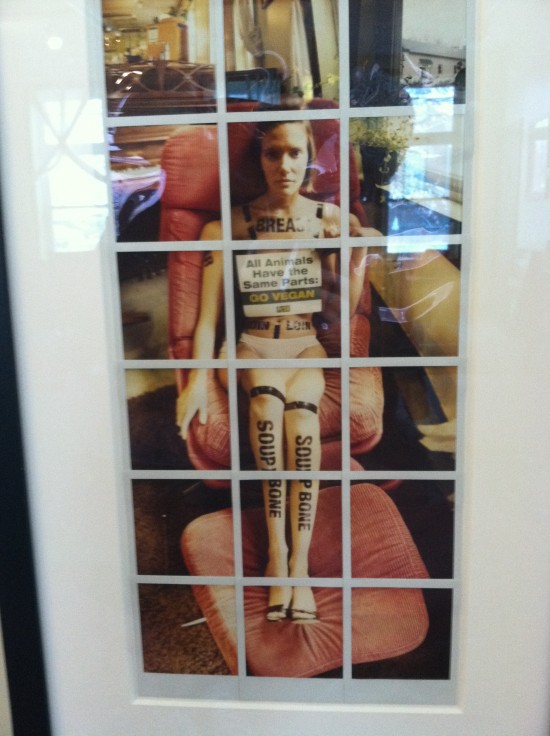 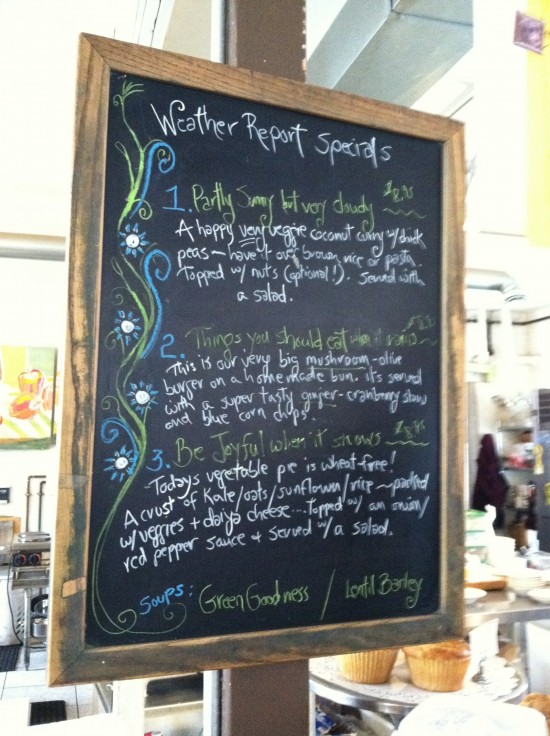 Upon recommendation I tried the Evolution Nachos Grande – a big bowl of organic tortilla chips (Garden of Eatin’) smothered in melty vegan cheese, topped with chili, organic avocado and salsa. It reminded me of some homemade concoctions I’ve put together in the past. 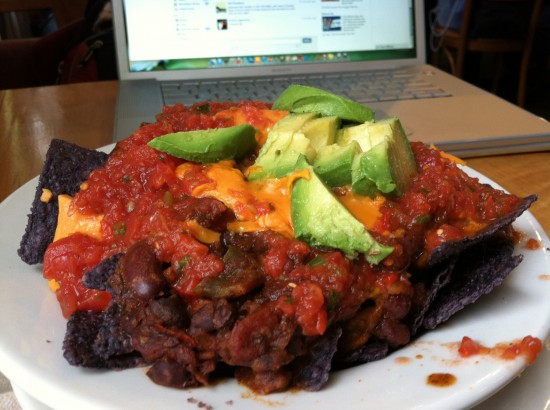 On another day I tried their That’s Not Turkey sandwich – hickory smoked Tofurkey, vegan cheddar cheese, sprouts, tomatoes, and lettuce. 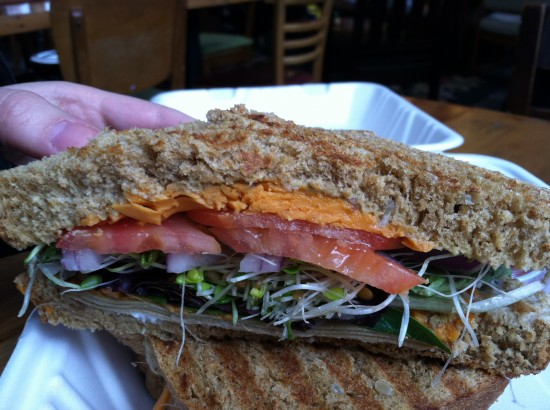 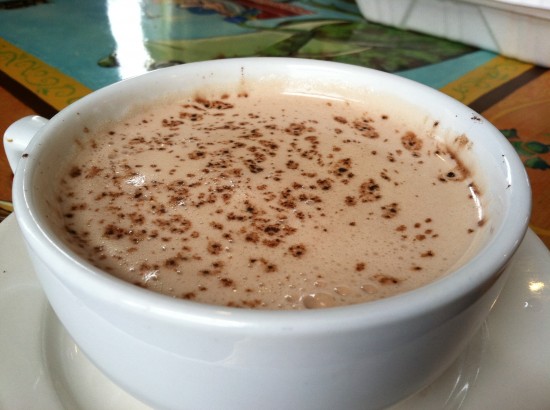 Through observing what people most often purchased and by the way of my own tastebuds, I quickly learned that Cafe Evolution is THE place to go for vegan sweets. It started with this cookie and then snowballed into vegan sweets heaven. Fabulous, giant chocolate chip cookie! 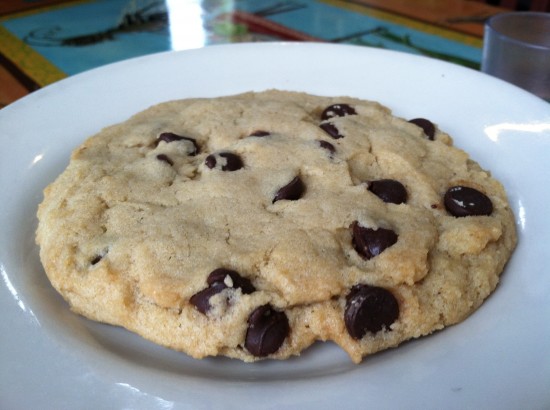 THIS CHOCO-PB BAR IS PHENOMENAL!!!!! Oops. I need to not yell when I get excited. I just can’t help it sometimes. Eep! This by far was my favorite of everything I tried from Cafe Evolution. I don’t think it’s a regular on the menu but it’s basically a peanut butter and chocolate rice crispy treat kind of bar. The fudgey top was soooo unbelievably deliciously chocolatey. Hehe… and the crispy part was perfectly tainted with peanut butter flavor that when combined in all one bite will seriously have you on your knees. 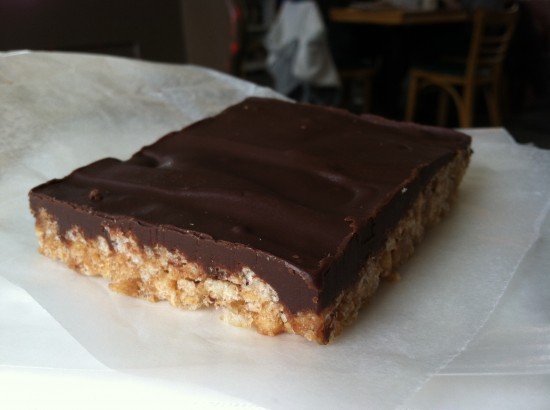 Sorry cupcakes, I know it’s hard to follow that presentation, but don’t worry, you were really friggin’ good too!! Here we have (closest one first) a Mocha Moose cupcake. It came with a little coffee bean dipped in chocolate on top. Yum! I was also totally surprised when I realized that there was cream inside this little guy. Wowzers! This moist, chocolate, mocha-y cupcake was absolutely delicious and at the rate at which they were being purchased, I’d say is one of their most popular cupcakes.

Working clockwise: I actually didn’t get the names of the rest but the vanilla colored one was surprising and interesting in terms of flavor. It hinted of lavender and lemon, some kind of spice too. I like it a lot actually. Different and totally worth trying. Next up is your standard chocolate on chocolate. Ommy nom. And the chocolate one with vanilla frosting was mint flavored and had chocolate chips throughout. Deeeelish! 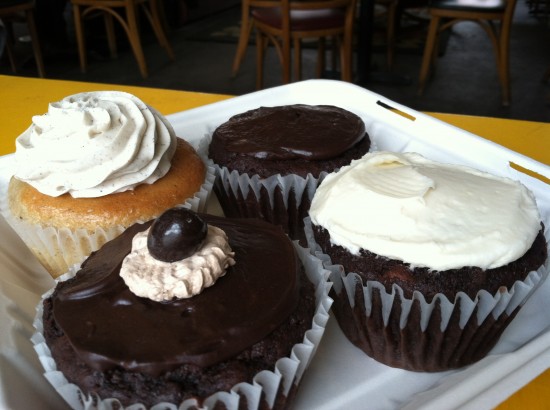 Cafe Evolution for vegan sweets, all the way!!