After having dinner with Tracye earlier in the week she connected me with Erica Meier, Executive Director at Compassion Over Killing (COK) in DC. Erica was unable to meet up but she put me in touch with Katie Shamp, an Outreach Manager for COK. To my delight Katie informed me that COK was hosting a leafletting event at an annual festival in the DC area. She invited me to tag along and I happily accepted.

We spent a couple of hours handing out animal welfare and vegan literature to the droves of people stepping off the train station and those within the festival itself. I’m a little embarrassed to say that it was actually my very first time leafletting. Well, I’ve handed stuff out to people before but not in a more formal setting. I also felt a little nervous as I was among “professional” leafletters. :)

After a few awkward moments of being ignored, walked by, and told “no,” I finally nailed down my strategy. Instead of saying, “Would you like some information on vegan food/vegan recipes/animal welfare” or something similar, I started to say, “Did you get your vegan recipes yet?” or “Have you received your animal welfare information?” To my surprise, it worked like a charm. I got the impression that folks thought they were missing out or should have received something that they hadn’t already. Hey, whatever works right? I got important information into people’s hands and it felt pretty darn good. Before I knew it I was out of brochures and the team met back up to find some vegan eats at the festival. 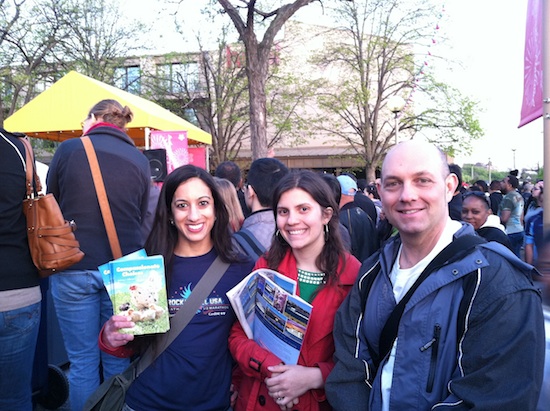 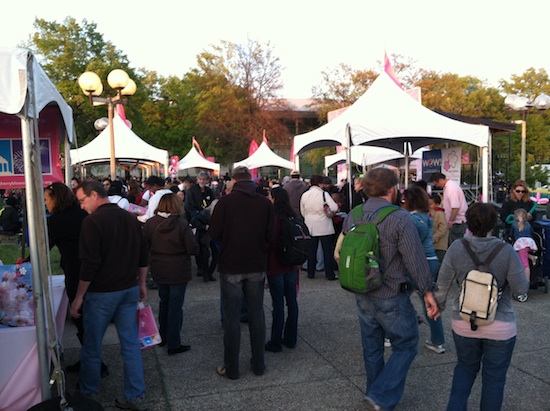 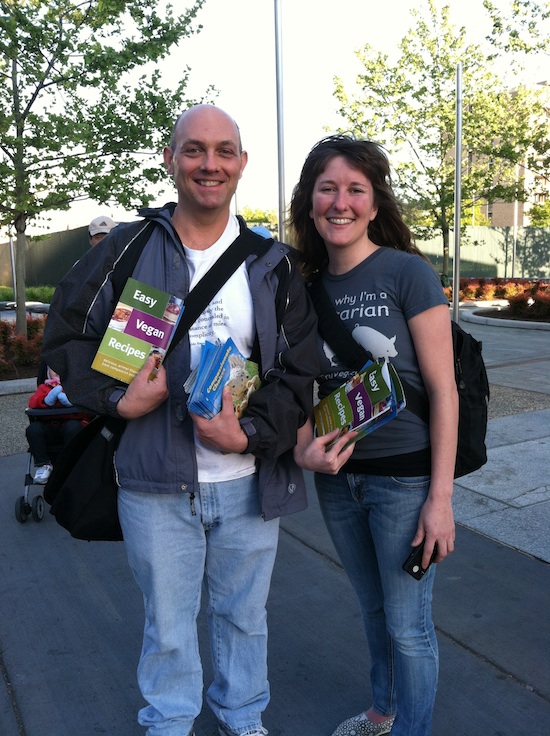 Rumor had it that there is an amazing Korean-style taco food truck at the event. I heard mouth-watering reviews of their hoisen-layden caramelized tofu tacos on a bed of lettuce and cabbage, dressed with rice vinegar, lime, and sesame oil vinaigrette. Oh yes. I was hungry. And so were my fellow veg enthusiasts. We jumped in line at TaKorean and waited. And waited. And waited. Apparently this place is THE place to be. I was getting even more excited, not to mention more hungry. 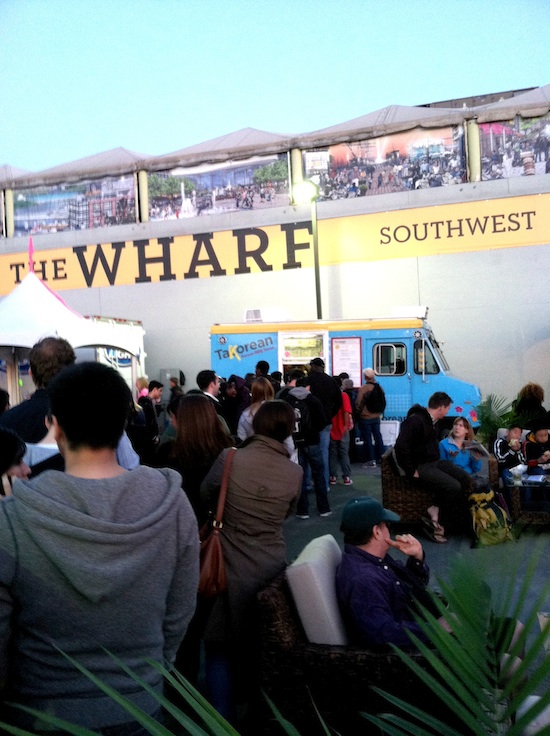 After about an hour or more the five of us finally reached the front of the line. This is it! It was getting late and we would finally be able to indulge in glorious vegan tacos. But wait… what’s that? You JUST sold your last vegan taco??? Nooooo!!!! We. Were. Devastated. But hope was not lost, someone in the group mentioned an Indian-food truck just on the other side of the event. If we could get there quickly we might make it before they close. SIDE NOTE: How cool is it that the food truck ran out of their vegan option BEFORE their meat options?!?!! Just sayin’! ;)

We hopped over to the other food truck and were elated to learn that they had a vegan dish on their menu. But they were out of rice. No worries, we’ll just take the eggplant mash and call it a day. We paid and then.. oh what’s this? You just finished a batch of fresh rice?! Yes, please!! We’d like to add it to our meals! We hunkered over our food, ready to pounce. It was nearly 10PM (if I recall correctly) and our bellies were growlin’ somethin’ terrible. RICE! YES! One of the other volunteers and I went to find a place to sit. We were mid almost bite when I saw Katie frantically running in our direction… “STOP! IT HAS DAIRY IN IT!” Noooooooooo. So. Close. Oy!! Turns out, after asking AGAIN – we had already covered all the bases (or so we thought) – there was yogurt or butter or something in the “vegan” eggplant mash. Crud.

Those of us who had already had food in our hands passed it over to the vegetarian in the pack and started to walk quickly through the crowd while also trying to figure out where we could get vegan food at this hour. I pulled up Google Maps, searched “vegan” and a few places came up. I said to Katie, “Hey, what’s this Busboys and Poets place?” YES! She said, why I hadn’t I thought of that earlier!! “They’re open late AND they have awesome vegan food!” We started the mile walk to Busboys and Poets.

I’m technically breaking that no-writing-about-places-that-serve-meat rule again but this restaurant saved our butts that night. And gosh darn it, they’ve got some of the best vegan food I’ve ever had. So, I felt the need to share. :)

I wasn’t feeling like having anything heavy so I took Katie’s lead and ordered a few sides which included sesame kale, collard greens, and grilled asparagus. The table also shared a giant plate of Vegan Nachos – yellow corn tortilla chips with guacamole, Daiya vegan cheese, pico de gallo, vegan sour cream, black-eyed pea and red pepper salsa; and Coconut Tofu Bites with plum sauce (GET THESE, YOU MUST GET THESE!!!). Everything was super delicious and incredibly filling. I’m so glad that we stopped here! 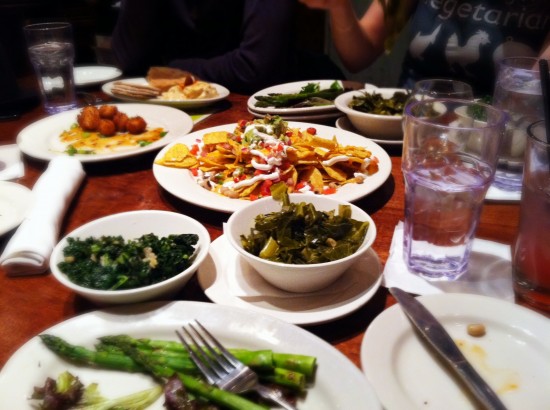 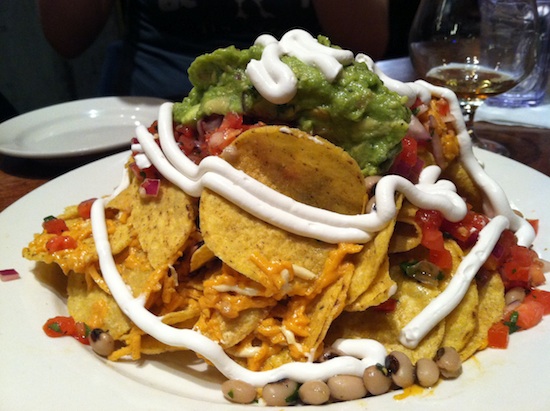 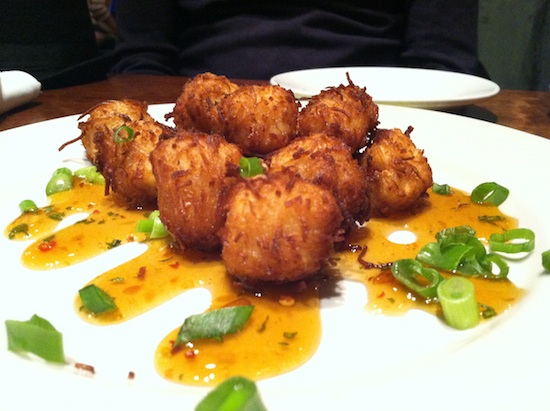 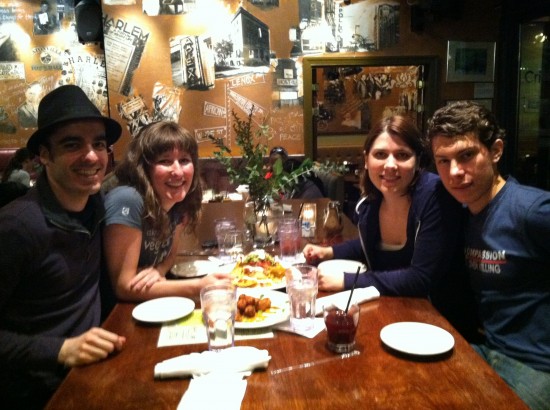 I aaaaalso got a dessert to-go. Check out this beauty – a raspberry cheesecake with frosting-like whipped cream. Oh yes. Oh H-E-double-hockey-sticks YES! This cheesecake had me on my KNEES. Good thing I was already in bed when I decided to eat it! ;) Yikes!! They have various flavors each week. Ask about the vegan flavors and GET THIS TOO!!!!!! Yum! 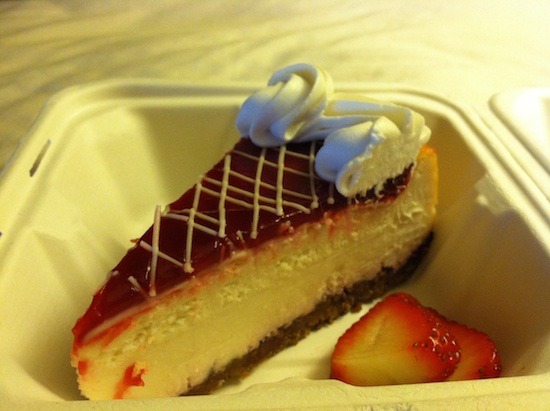 The following day I planned to meet up with some vegan friends who also happened to be in DC that weekend, for the White House Easter Egg Hunt. On my way to meet up with them I took a few scenic pics along the way… 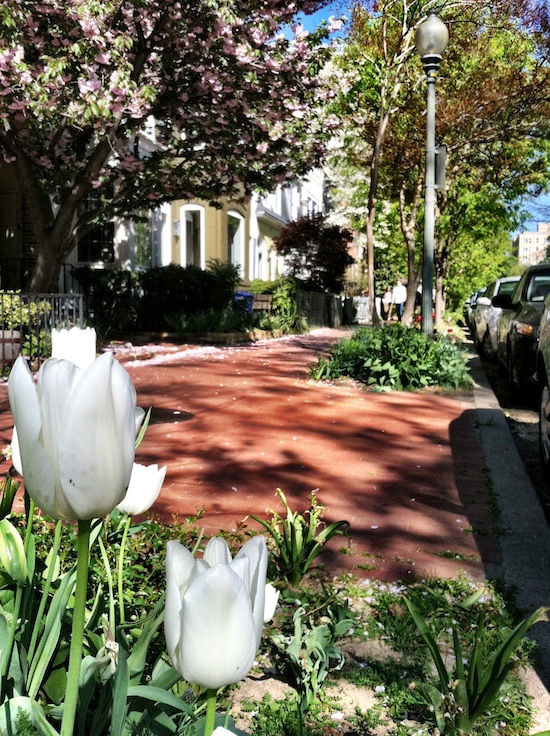 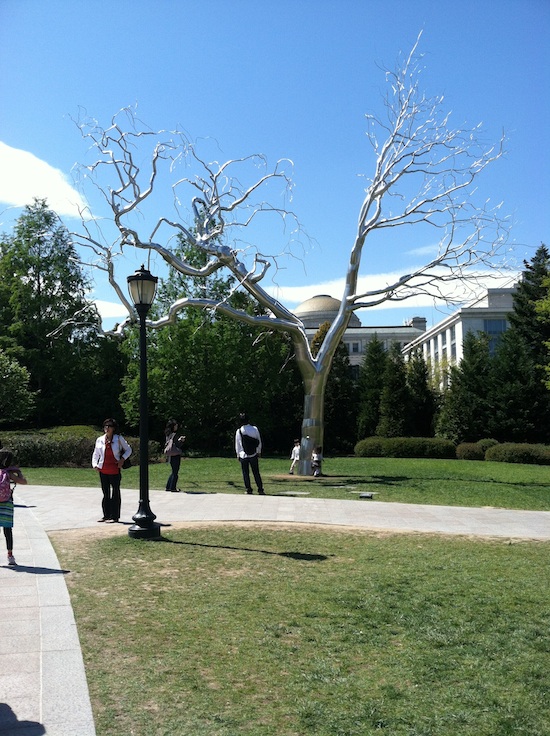 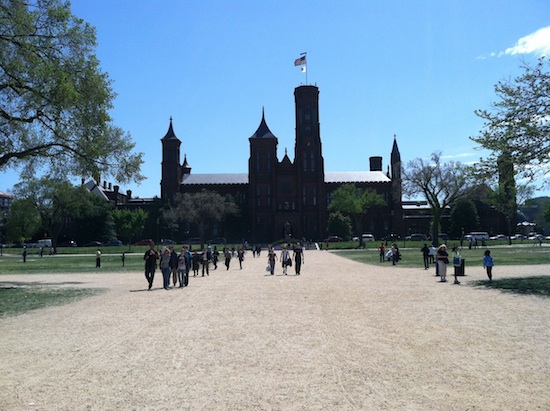 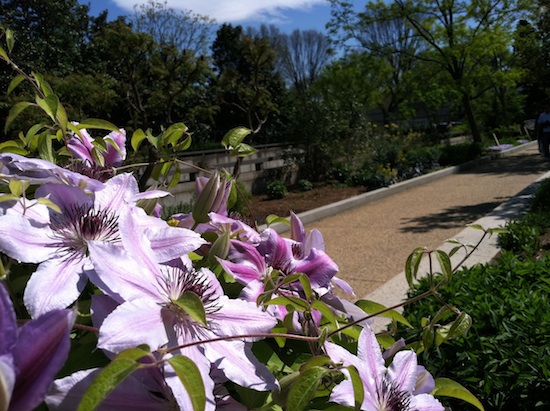 After touring one of the DC museums the crew suggested we check out Busboys and Poets for lunch. No argument here! I was back again (woohoo!) and this time I tried their Falafel Sandwhich – with hummus, cucumbers, lettuce, tomato, and onion on whole wheat pita; served with tahini sauce. Another satisfying meal!! The others loved their meals as well. Nice! 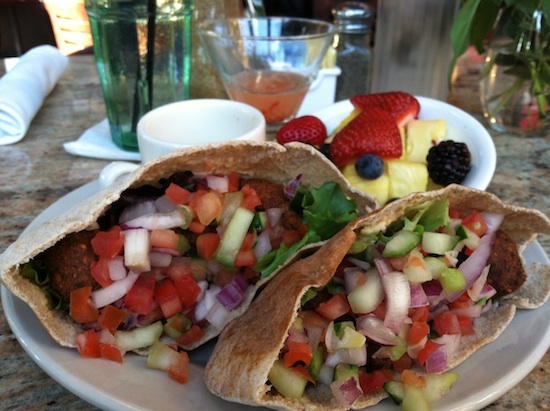 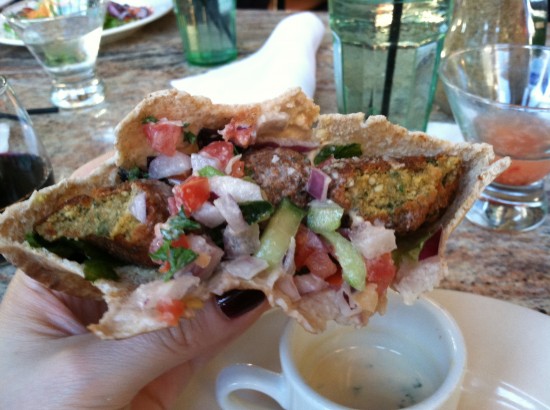 Thanks to Dawn, Olga, Jim and Nicki for meeting up with me in DC that day. I had a wonderful time hanging out and catching up!! :) SIDE NOTE: Dawn, Olga, and Jim are founding members of the Albany Vegetarian Network (along with my parents). Cool, huh?!

Confession: I stopped by a Busboys and Poets (there are a number of locations) TWO MORE times before leaving the DC area. What can I say… it was just that good.

On this morning I had the Vegan Egg Wrap – tortilla wrapped tofu scramble with mixed veggies, vegan bacon and vegan cheese; served with home fries. NUMMIES! 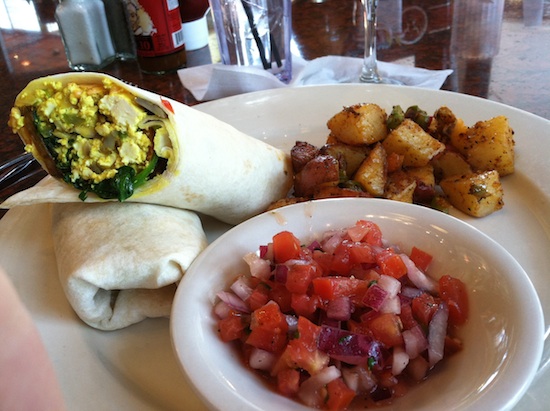 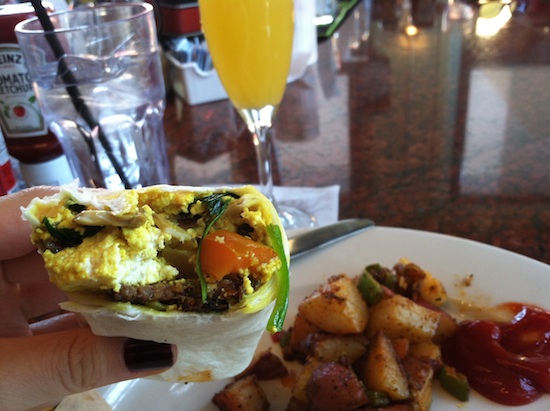 And then on my way out of town I stopped once more (did you know they have a seating area where you can chill with your computer while eating? Amazing!) and enjoyed Yellow Gazpacho with basil oil and guacamole as well as their Vegan Tuna Salad Sandwich – chickpeas with relish, nori, carrot, celery, red onion and vegan mayo served on toasted french bread with lettuce and tomato. Another winner! 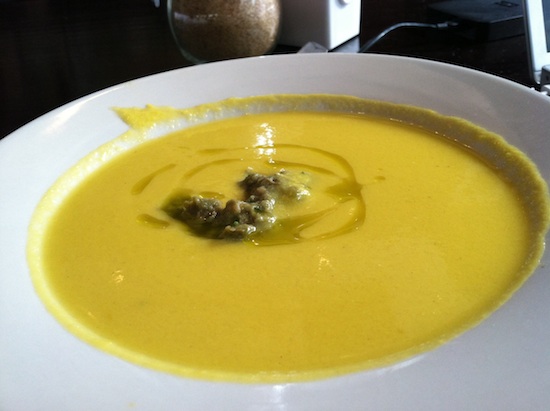 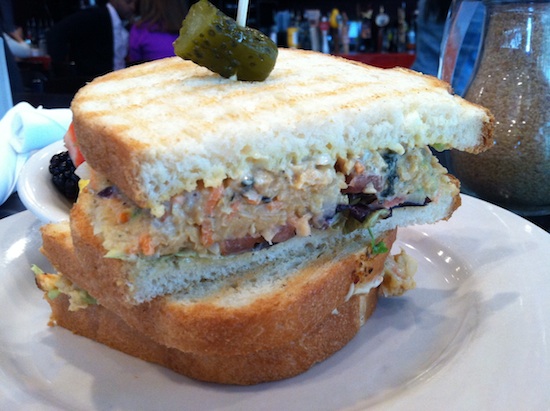 Having had multiple meals at several different Busboys and Poets locations, and loving them all, is certainly a testament to their consistency and quality. They’ve got a system down and it works. I love it! I also really like their website (it’s up to date and super helpful!! — that’s refreshing in this biz — sorry to be harsh but it’s true) AND the story behind their beginnings… well, it’s just as good as the food itself – check it out by clicking here.

That’s it for DC! Thanks for reading along, everyone!! Virginia is next! :)