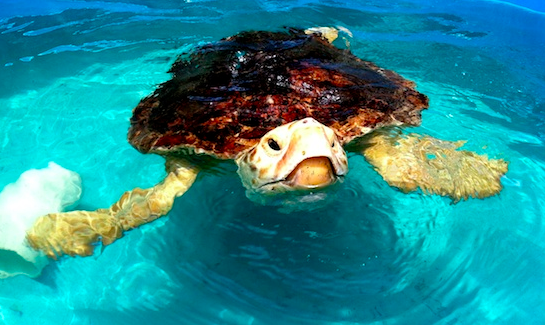 NOTE: I’m not currently in Florida but in Texas. My blog posts are about four weeks backlogged. Please check out Facebook and Twitter for more up-to-date news! :)

Waking up at Deer Run B&B is like a dream come true. The sun is shining, the room is comfortable with an overhead fan keeping the temp just right, you can smell the ocean when you crack a window, and the indigenous Key Deer are wandering around just outside the room, as if you’re not even there. Beautiful. Simple. Life.

Breakfast is served at 8:30 sharp, on the second floor of the B&B. Screened in, porch seating welcomes guests with cozy seats, organic, fair-trade coffee and tea, and island-ey decor. The meal is homemade by Jennifer and Harry – the owners of the B&B. Everything is 100% vegan and absolutely delicious. From what I understand the breakfast is different each morning. Today we had waffles with fresh fruit and pineapple smoothies. I wasn’t expecting such a wonderful and filling meal. A stark difference from canned, watery fruit and stale bagels that I’ve come to expect from the average hotel/B&B. 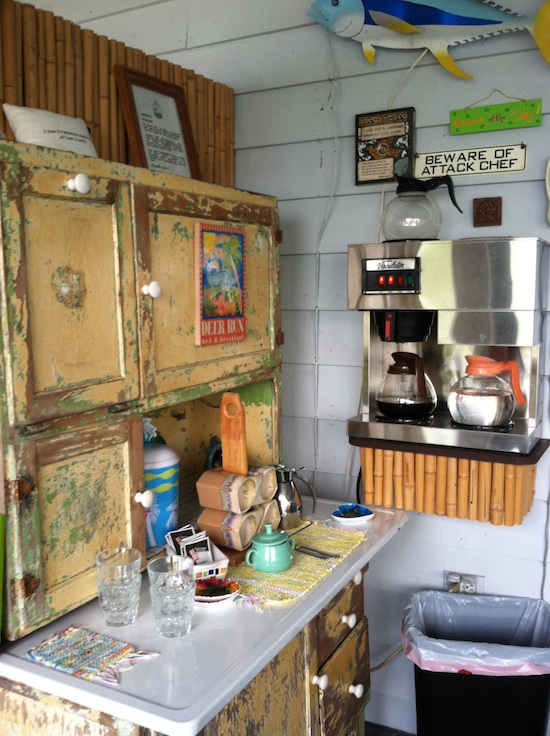 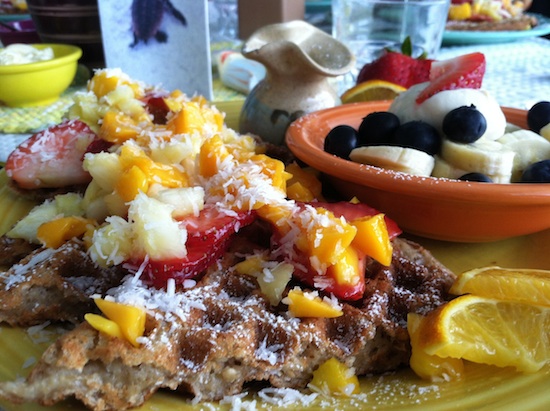 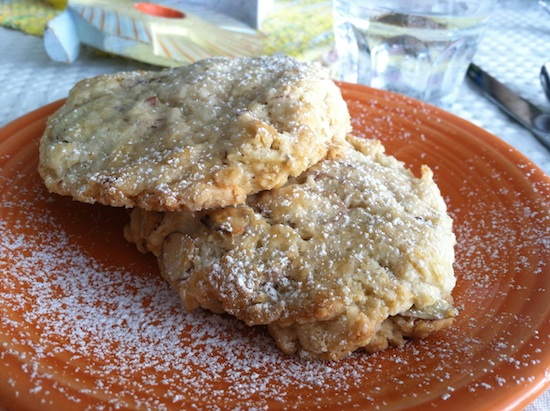 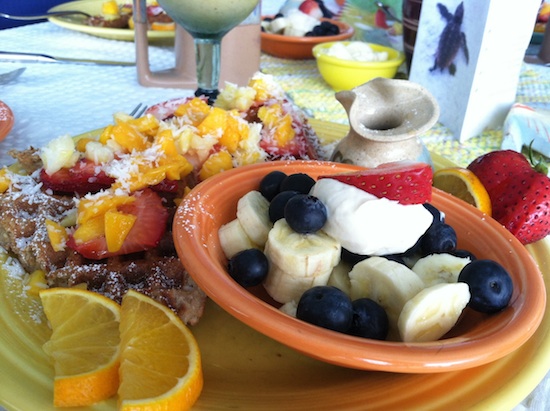 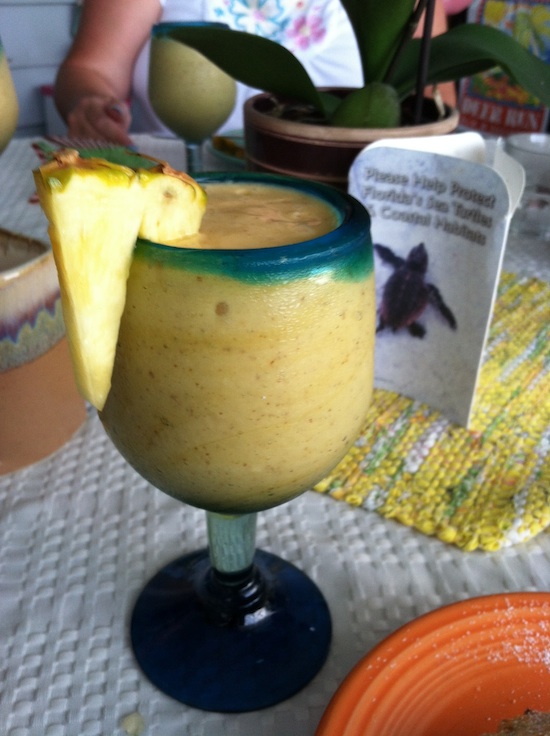 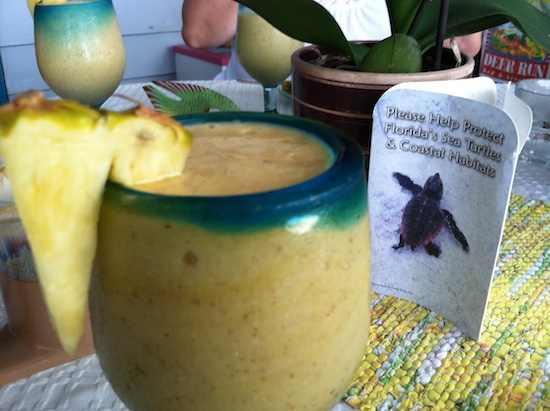 Following our post-breakfast nap we set out to visit The Turtle Hospital, but not before stopping by a highly recommended vegan-friendly health food store and cafe, Food For Thought. The cafe and juice bar are all-vegan, I believe but the associated health food store does carry dairy (and possibly some meat – I’m not entirely sure). They’ve also got a great selection of books throughout –  great for browsing while waiting for your food to be ready. NOM.

We split the organic, raw Meatball Wrap – walnut meatballs, marinara, mushrooms, onions, zucchini, and balsamic vinaigrette. It was super delicious, one of the best raw food meals I’ve enjoyed. Accompanied by a couple of fresh juices, we were then ready to see some TOYTULLS! 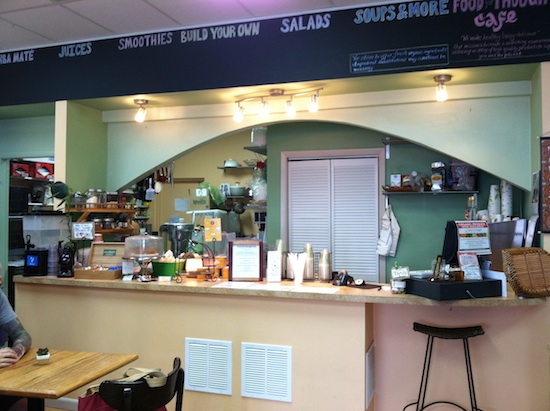 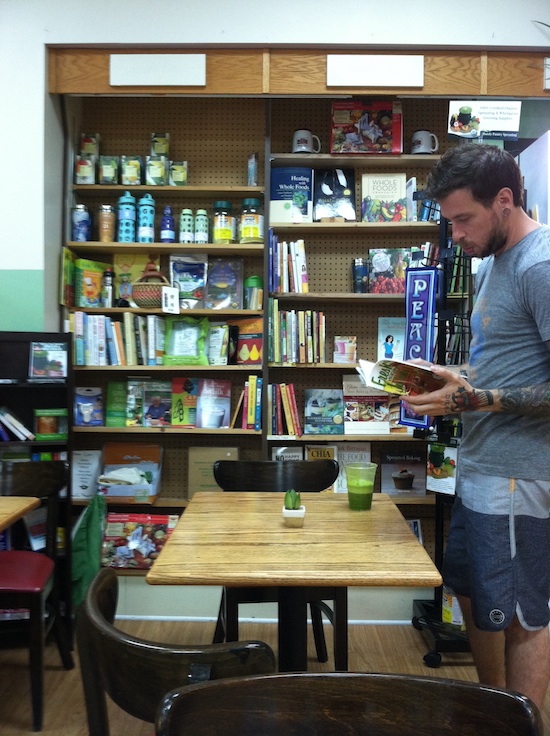 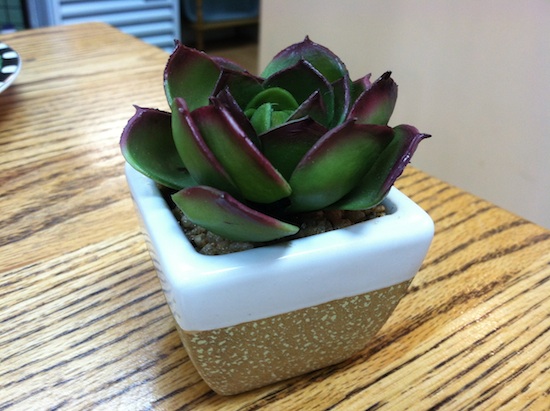 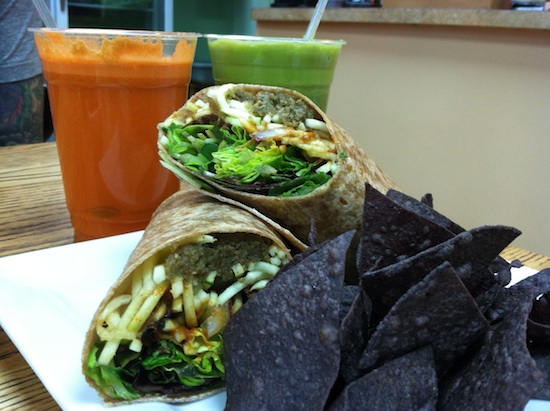 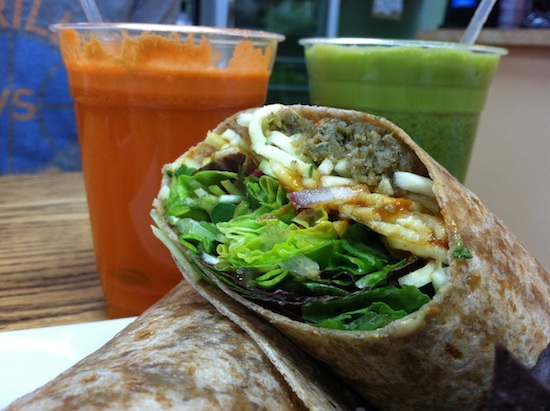 We first heard of The Turtle Hospital while checking-out at Sugar Apple Juice Bar & Cafe in Key West just a couple of days ago. The woman working, who mentioned it, had these awesome wooden turtle earrings on and she said that she got them from The Turtle Hospital. She then went on to tell us about a recent rescued turtle that had been caught up in a fisherman’s net and had been rescued by some folks passing by. One of the turtle’s front flippers had been injured during the entanglement which resulted in amputation of the flipper. The woman then went on to tell us that they give tours and we’d be able to see this turtle if we went soon. So, on our drive from Key West to Big Pine Key I called and we scheduled a trip for this afternoon. 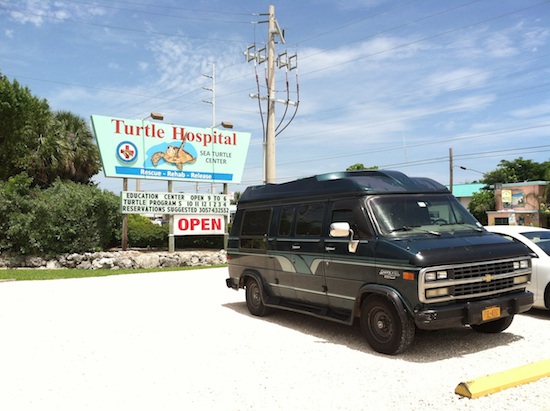 The tour began with an intro into the seven species of turtles from around the world, five of which live and nest around Florida. We learned that the sea turtle’s biggest enemies are humans. Surprised? Yeah, neither were we. Between hunting them for turtle soup (no longer legal) fishing nets, lines, garbage, and boats, we’ve diminished them to near extinction. Thankfully there are non-profit rehab facilities, like The Turtle Hospital, that are doing great work and creating educational opportunities to help slow down our impact on these gentle creatures.

After the intro lecture we were given a tour of the facility and were able to meet, and hear the stories, of each of the current residents. Some of the turtles will be at this facility – or adopted out to other, similar facilities – if they are deemed unable to survive in the wild. Currently, 11 of the 21 turtles at The Turtle Hospital, are “permanent residents.” 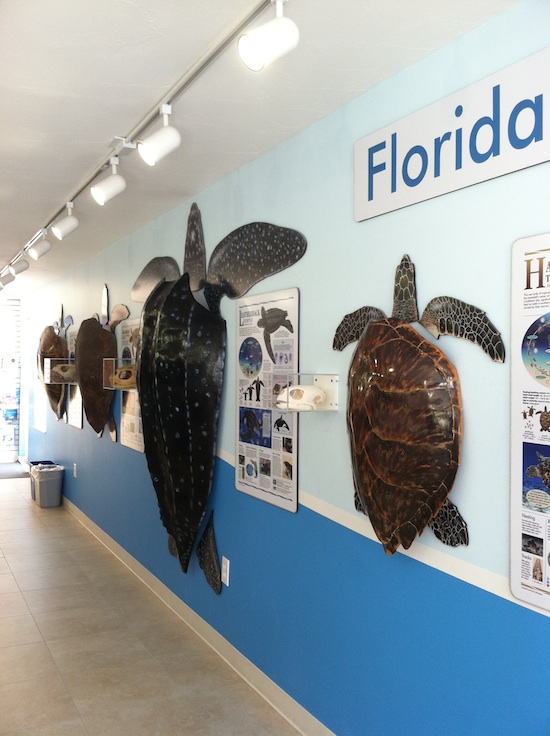 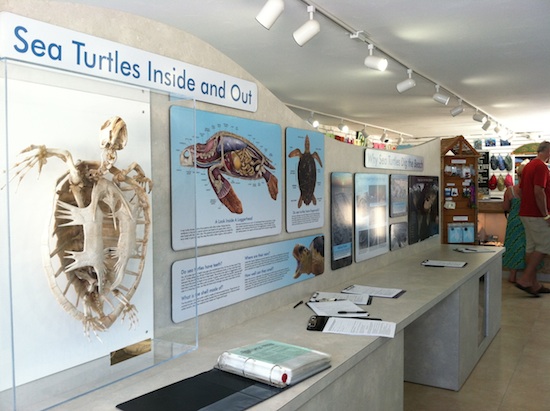 Pictured below is Farley, a 370 pound adult female green (an endangered species). And yes, she was named so because of her size. :) A family (who apparently was setting out for a day of fishing **grr**) found Farley “…entangled in the line of a stone crab trap and had been caught up for quite some time.” According to The Turtle Hospital’s website:

[Farley’s] right front flipper had already begun to self-amputate–basically rotting away from lack of circulation.  Cruising to shore to pick up Turtle Hospital Rehab staffer Tom Luebke, the group heave-hoed the turtle onboard the boat.

Had Farley been found any later (or maybe even by a different group of people) she would not have survived. After arriving at The Turtle Hospital Farley underwent surgery to fully amputate her right front flipper so that it could properly heal. This was also a historical event for The Turtle Hospital as Farley was one of the largest turtles brought to and treated at the facility.

I’m happy to report, thanks to The Turtle Hospital’s excellently kept blog, that Farley has since been released back into the wild! 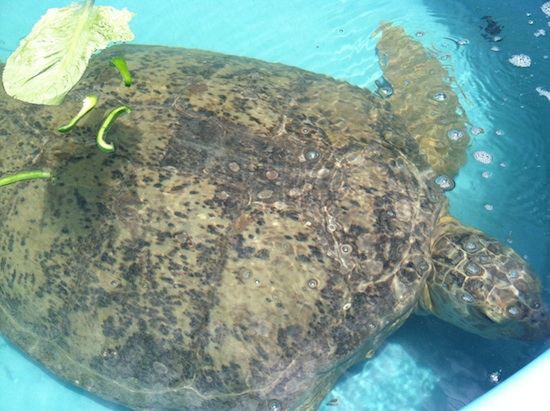 The next few pictures are of the Hospital’s bigger pool area where most of the “lifers” live. These include turtles that have been injured by boats, sharks, or nets; or are recovering from impaction surgery (“When a turtle has an impaction, an infection is growing in their intestinal tract. That infection releases CO2 gas which compromises the turtles bouyancy and causes the turtle to float,” TTH) or fishing hook extractions. 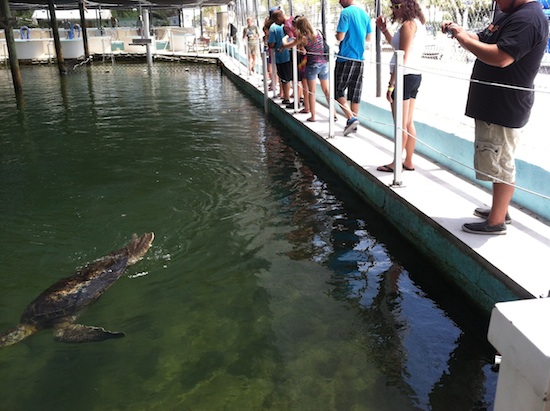 For some of the turtles, they’ve experienced a little bit of everything. This little fella below had a series of traumatic blows that left his shell completely deformed. Some of the turtles, including the one pictured below suffer from “bubble butt,” which is when their shell is jarred so hard that it separates from the spinal column (usually from being hit by a boat), and an air pocket forms between the turtle’s back and it’s once adhered shell. This too causes buoyancy problems, to which the staff glue weights (see the second pic below) to the shell, to help them balance out. Without proper buoyancy the turtles can’t dive for food, or in some cases, float properly to get air.

See that one pictured just above? He’s not making a quick turn, he’s actually swimming sideways, because of a collapsed lung. He’d be unable to defend himself in the wild or properly hunt for food, so he will remain a permanent resident at The Turtle Hospital. 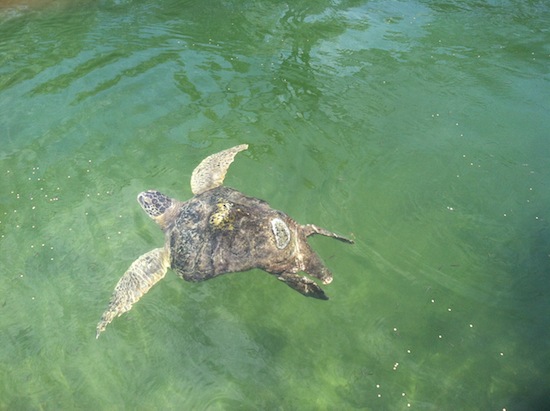 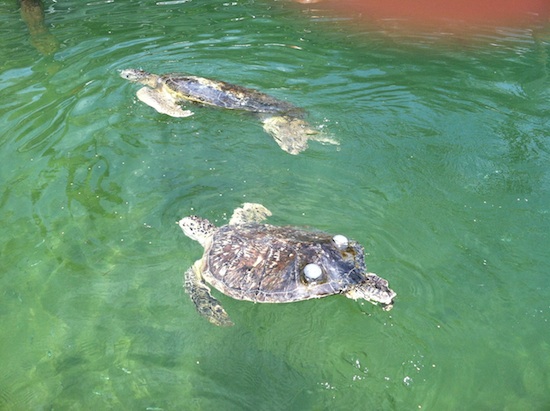 Below are a couple other cuties who are in their own tanks while they wait to be treated or are in recovery.

The Turtle Hospital is run entirely on donations, most of the equipment used to repair and rehabilitate the turtles has been donated, and all of the procedures are completed and overseen by local and non-local volunteer veterinarians. One vet in particular has been volunteering his time for over a decade. So wonderful!!! 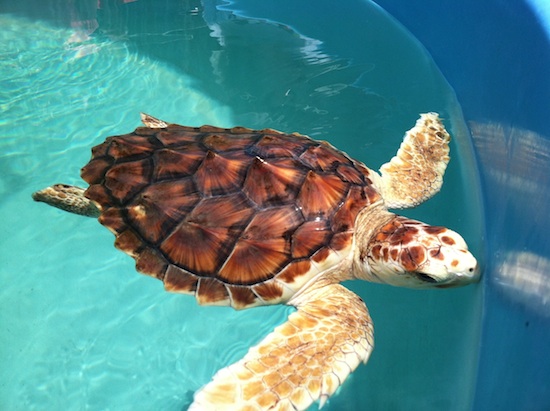 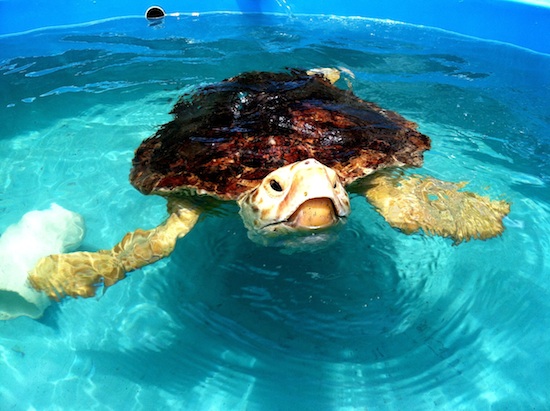 They should call this one Skeletor. :)

Once the tour was over, and Eric picked up a signature Turtle Hospital tee, we headed BACK to Food For Thought for some sweets. We split two yums: a raw key lime pie AND a raw sticky bun. Om nom nom. 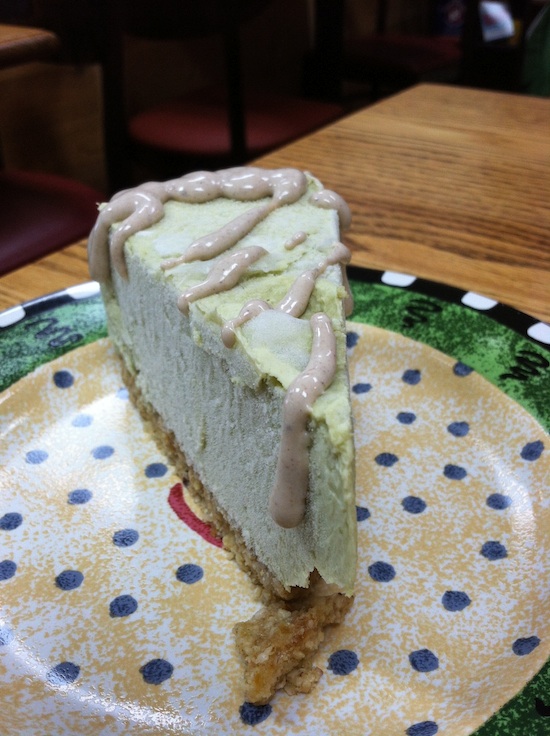 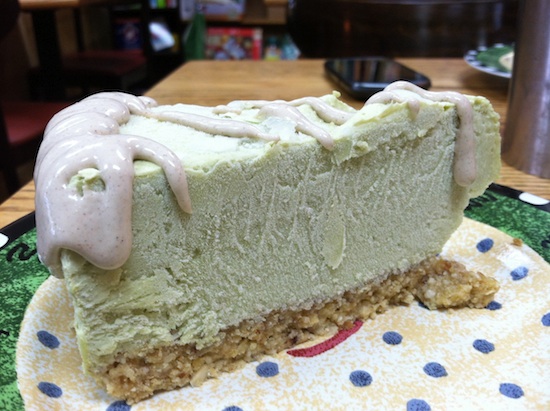 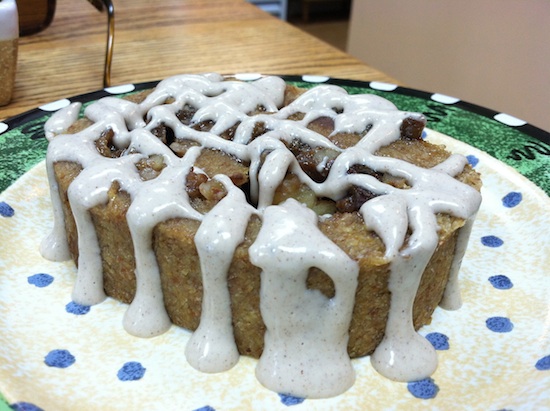 Before heading back to Deer Run we stopped by Good Food Conspiracy to pick up some juice and ended up running into a couple that runs a vegan crepe company called Crepes To-Go.

Good Food Conspiracy appears to be run by one woman who has stocked her store full of a grocery store-like items. She also makes fresh juice. The couple who was sitting there, chatting with her, told us about their new crepe company, which is a food cart that I think is usually located in the Mallory Square area of Key West. But now that I’m looking over their website I see that they say they “strive to make vegan and vegetarian crepes,” so maybe they’re not all-vegan. Also, it’s unclear as to where they sell their crepes. Their site says, “we are mobile so keep an eye out for us.” Um. So yeah. I don’t know.

Aaaaah, finally back to Deer Run, Eric and I settled in for a late afternoon nap (wouldn’t you?!) and then hit up waterfront for an evening swim. We attempted to catch a decent sunset too, but it was a bit cloudy. 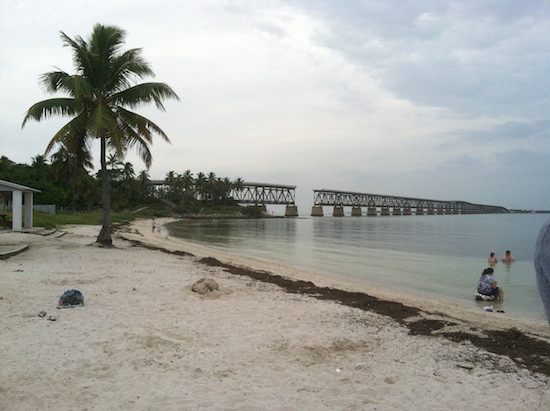 This is our last night at Deer Run, then on up the west coast of Florida we go! 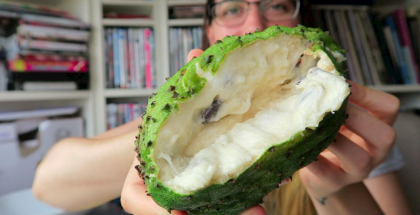 How To Be In The Vegan-Product-Know Before Everyone Else... February 7, 2013 | Kristin 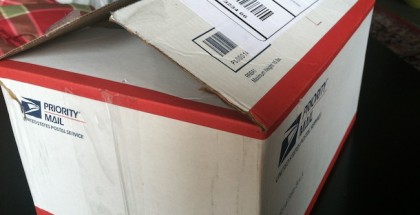