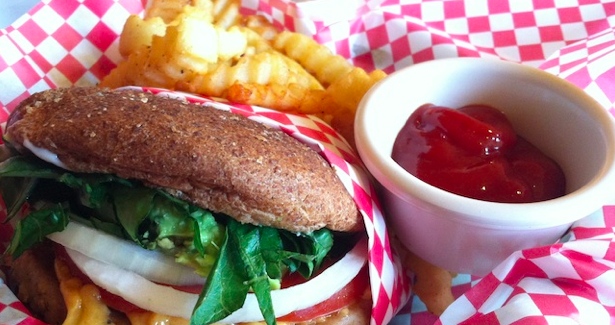 NOTE: This diary-style post was originally created on February 16, 2013 (almost exactly one year ago!) while I was still on the road. Please note that I’m not currently in or near AR or MS. I’m simply catching up on sharing my journey, from that time period. :)

ENTER, MY WRITING/JOURNALING FROM FEBRUARY 2013:

Oooh man, it’s been two and a half months since I last wrote about my time on the road and/or any restaurants. Before I dive back in I would like to take a quick moment to be honest with you – and with myself – about why it’s taken me a while to get back into the swing of things.

The short answer is, I’ve been feeling completely overwhelmed.

The longer answer: It started just after my birthday celebration in Vegas, at the end of October. I kind of hit a wall, and wrote a little about it at the end of this post. To lift the veil on that a bit more – my ‘hitting a wall’ was partly due to the fact that I had set expectations early on to have completed the trip by my birthday. When it became apparent (a few months prior to my birthday) that it wasn’t going to shake out that way I continued to make plans to push on and didn’t give it much thought beyond that. Then my big ol’ 30th birthday came and went. I had a lovely pre-birthday dinner with some new friends, and then found myself – for the first time in twelve months – feeling super duper lonely. I spent my birthday day curled up in blankets on the bed at a hotel (sponsored by Paul of Eating Vegan In Vegas – which was so awesome), staring at my computer, trying my darnedest to write about this joyous birthday weekend in Vegas, that wasn’t shaping up liked I’d hoped. I also spent that day looking up the restaurants I’d need to visit while driving through California. By that evening I had written one paragraph, found out that I had 134 all-vegan restaurants waiting for me in California, and feeling totally and completely drained emotionally and physically.

I thought, “How could this be?! I’m living the dream of all dreams – MY dream. A dream that’s come true because of so many generous people. How could I be feeling so down and stressed?” It was time for me to finally let the tears, I’d been holding back all morning, flow. It was time I sit with these feelings once and for all. There was a lesson here for me and I needed to figure it out.

It didn’t take me long to understand why I not only felt lonely and overwhelmed on this day. The obvious reasons were: 1) it was the first birthday I’d spent – probably ever in my life – away from people I knew for more than a few hours, 2) I hadn’t taken a break from this whirlwind adventure the entire twelve months, and 3) The not so obvious reason is that I sent a long email to my parents about how I wished I could have spent this “big-year” birthday with them. That I should have continued my trip in the fashion that I had all along – taking each week at a time – instead of rushing through a few states to make it to Vegas in time for my birthday.

I talked to a couple of friends and after some serious thought I decided it was time to take a short break from the road. I called up my good friend Craig in Houston, who had already invited me to attend his family’s Thanksgiving festivities, to ask if I could hang out for a bit longer… say, the entire month of November?!

NOTE FROM PRESENT-DAY ME: As I was editing this post I found it super interesting to revisit how I was feeling and what I was up to at this time on the road, and in my life. The following paragraph is a raw, unedited clip from this “diary-style” post.

..explain how I’ll be sorting through the remaining places to write about… a mix of lots of details, journal-style, and nothingness (NOTE FROM PRESENT-DAY ME: I have no idea what I meant by nothingness. Perhaps travel-related posts that aren’t just about food. Or maybe I was feeling empty or lonely. Ha… I just don’t know. Which kind of makes it even more interesting.) … sorted by region and [how they are] not in the order I visited…bc of website update. # [of restaurants] Now [left on my list].. to Arkansas.

So. Here we are now. Arkansas. Can you sense my enthusiasm? ;)

I did in fact find vegan restaurants in Arkansas (why isn’t it spelled “Arkensaw?”). Three restaurants, as a matter of fact! Not including a rather randomly placed, somewhat eery gas station that had a small grocery store inside, featuring an unexpected number of vegan items. Nuts! Anyway, here I am taking a picture (shhh….while driving) alongside a train in the middle of nowhere Arkansas. 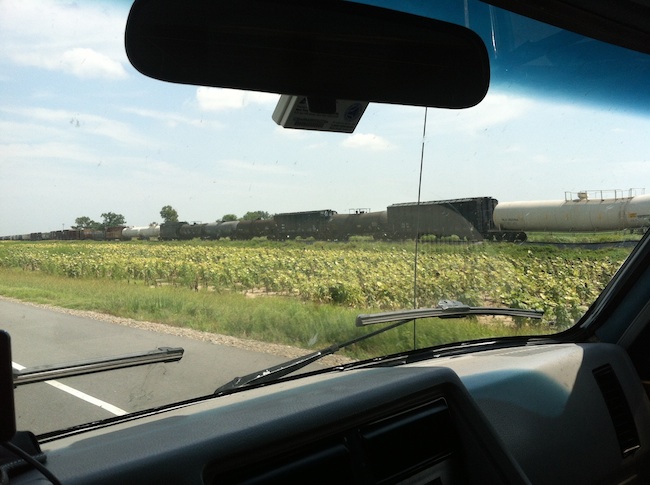 And finally made my way to Garden Secrets (NOTE: Unfortunately this restaurant has since closed.) Did you know that they have the best “vege” burger in town? I’m sure you can guess what I ordered, then. :) 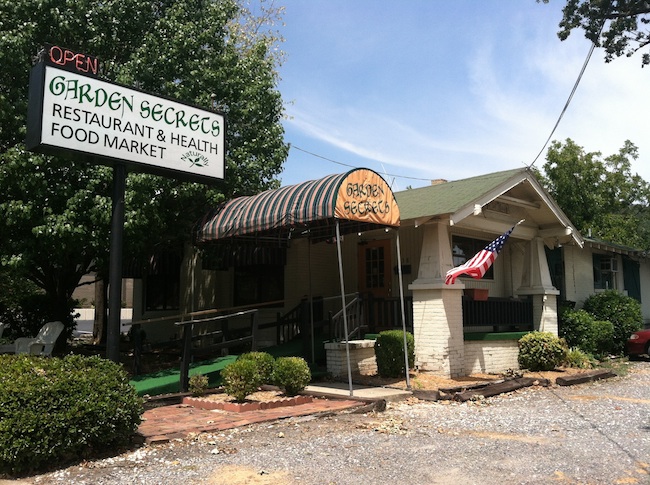 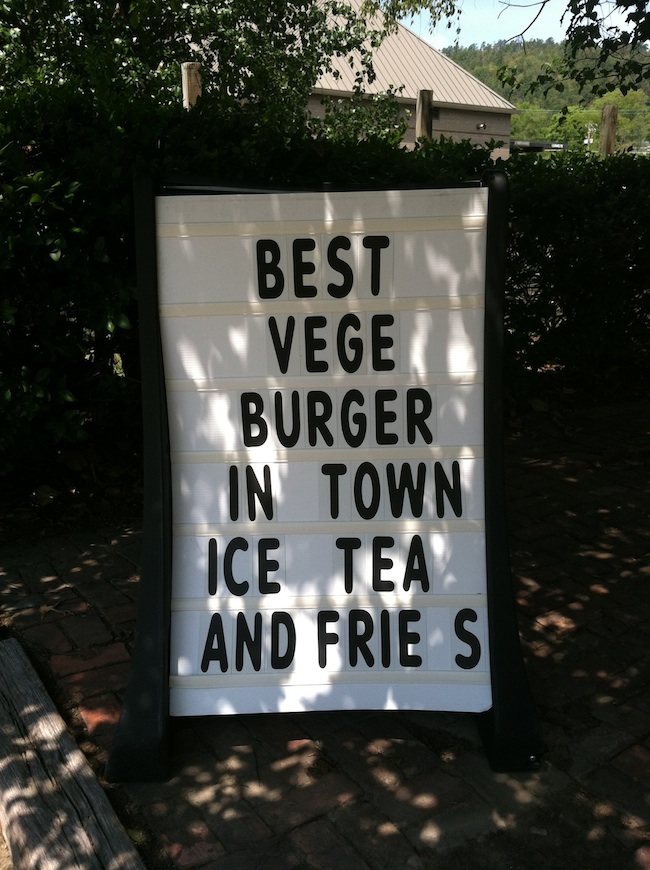 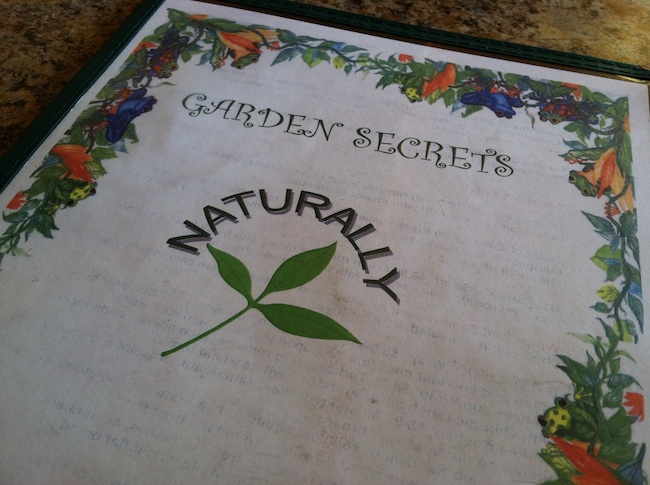 I had the Guac Burger – Boca patty, which was actually pretty good. The fries were great! Homestyle, light, not too greasy. I love that they served their goodies in diner-style baskets with the traditional red and white paper. And I loved that the burger was served wrapped up. 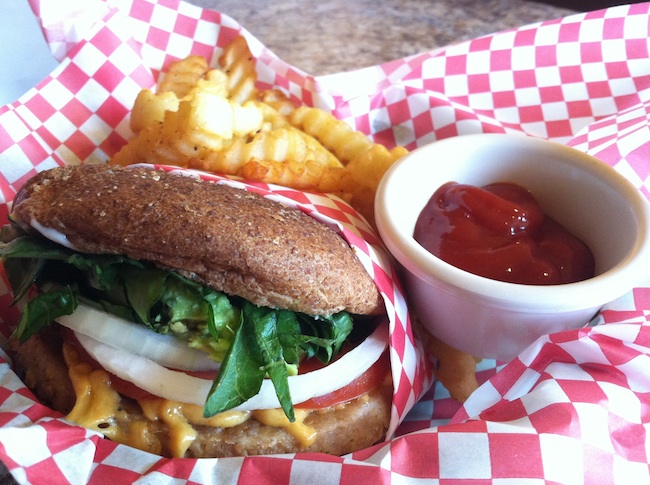 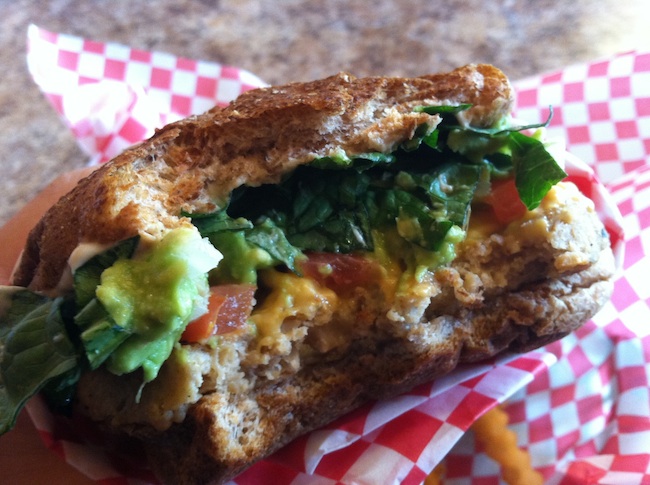 Next up in nowhere, Arkansas: Wellness Secrets (actually, it’s in Decatur).

NOTE FROM PRESENT-DAY ME: Call ahead if you’re planning a visit. In updating this post I see that their Facebook page hasn’t been active since November 2013. But they did appear to have a herbalism class in early January. Based on their online activity, I’m not clear on if they’re still around or what they’re up to.

I had the pleasure of emailing back and forth with Franklin, one of the staff members, prior to my arrival. We set a time to meet up and I ended up spending at least two hours on their property. Turns out, it’s not so much a restaurant as it is a health and wellness center where folks go to cleanse, fight illness, shop (in the tiny grocery store), or grab a quick bite in their new (at the time) volunteer-run cafe.

Franklin was extremely helpful and kind. He ended up making and sharing a meal with me (food pics below), followed by a tour of their wellness property. 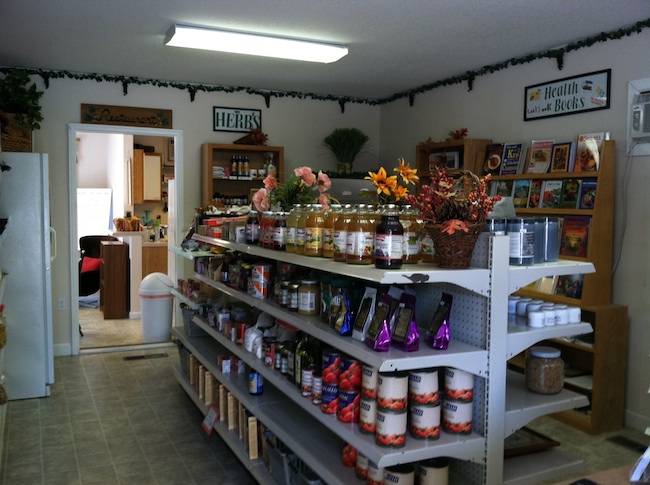 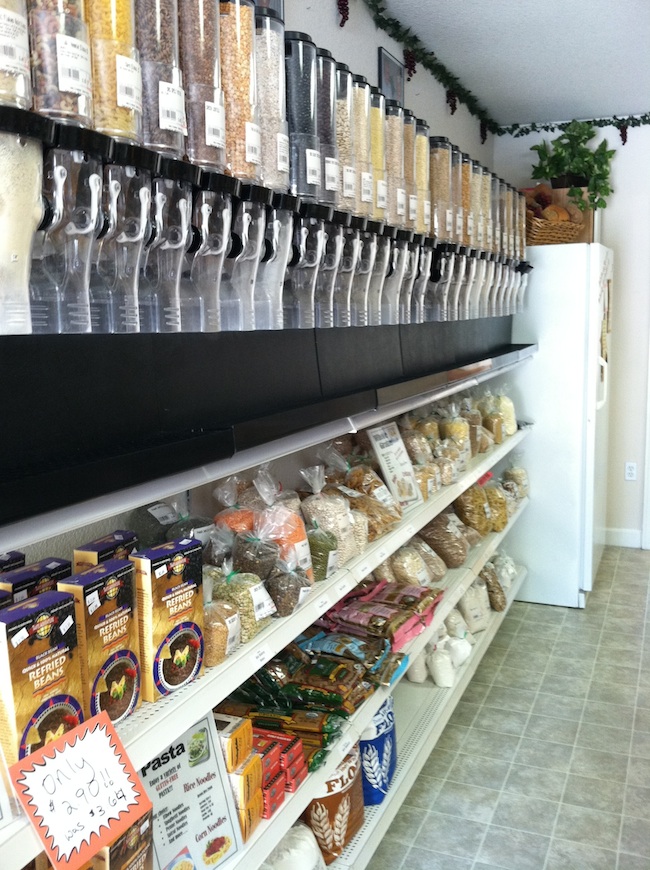 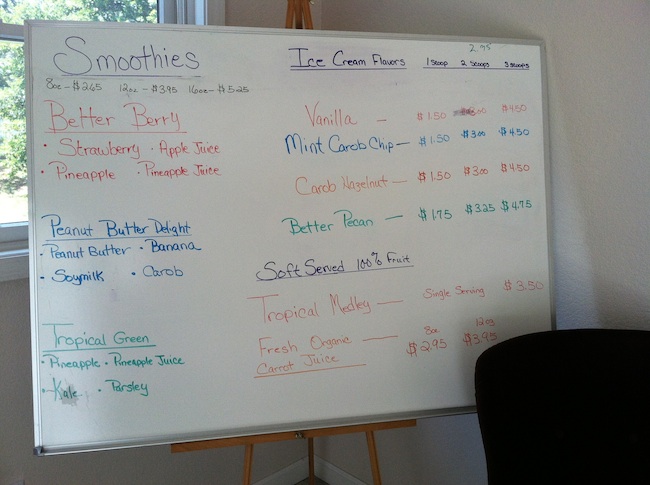 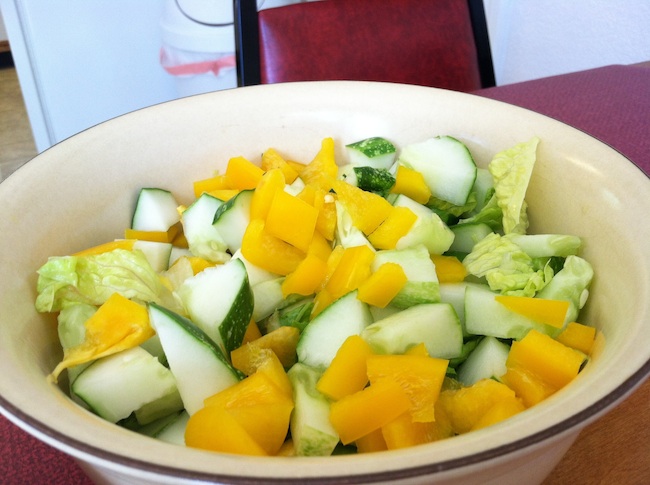 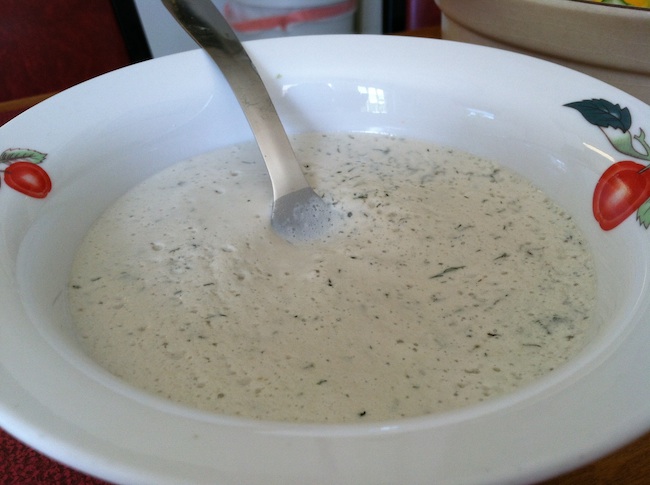 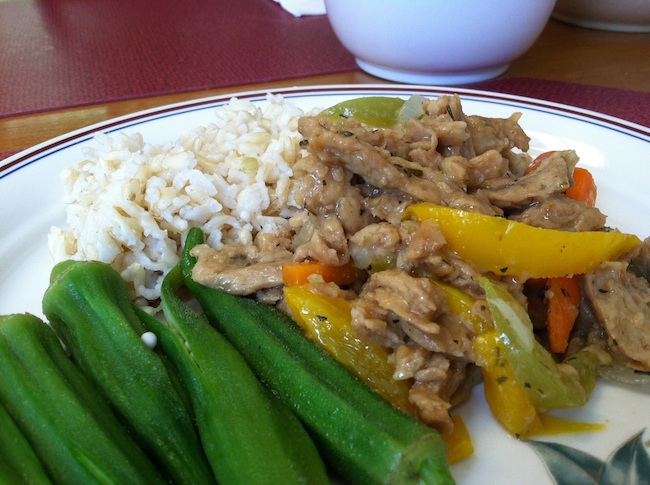 Thank you for the delicious food and hospitality, Franklin! :)

Upon Franklin’s recommendation I took the ten minute drive down the road to go fill up Gerty’s gas tank and then check out its SUPER random vegan-friendly grocery story (within the gas station).

You guys know I tend to keep things positive and light on this blog. But rarely have I ever been as sketched out as I was while at this gas station. I mean… it’s called SLEEPY HOLLOW GAS STATION, for goodness’ sake!!

I had to use their bathroom and it was something straight out of a horror movie: “Young woman traveling alone in a big ol’ van. Pulls into sketchy gas station. Pan above woman filling gas tank to name of gas station: SLEEPY [friggin’] HOLLOW.  Young woman enters eery gas station to pee, and never to return. Mwaahahahahaha! ”  [EDIT: Maybe handsome vegan man appears, he too during his lost solo travels, and saves woman. Maybe. We’ll see.]

Haha… no but seriously, there was more than one moment where I thought this was going to be my last stop on the trip! In order to get to the bathroom I had to work my way through a back room, behind this narrow, dirty hallway, to a room that was stacked from floor to ceiling with empty boxes.  It had such a creepy vibe and the bathroom was tiny and unkept. I think it was just for the employees but they let me use it.

I was too nervous to snap photos but I did get one of the ice cream I bought (naturally), a thought-provoking sign on a mirror near the library section (???) of the gas station grocery store, and proof that James Van Der Beek was a sheriff in a former life. 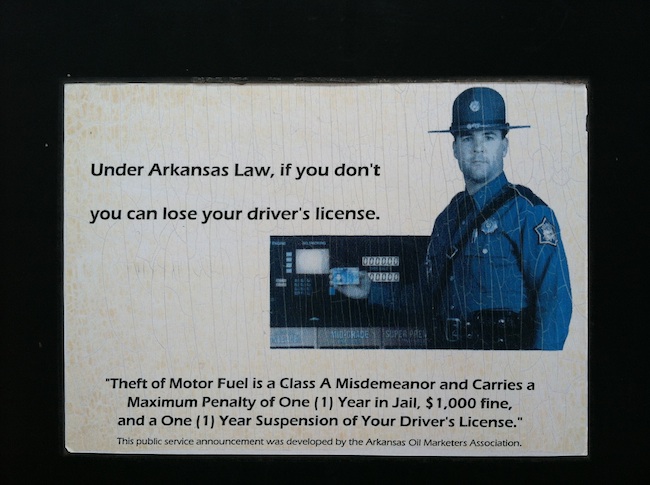 Naturally, I read the above sign in three different ways:

And then there was the sign that made me happier than James Van Der Beek sheriff’ing gas stations: 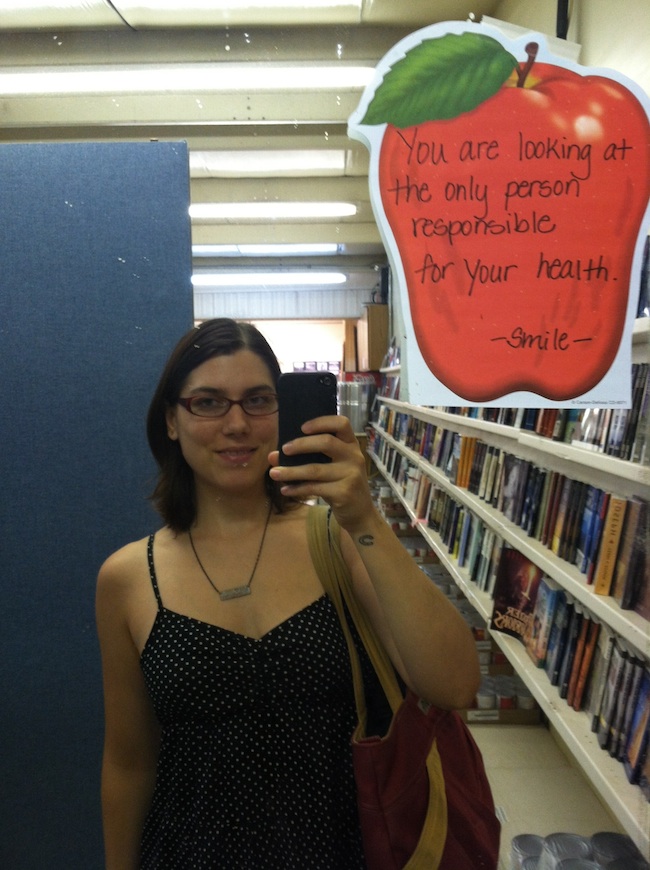 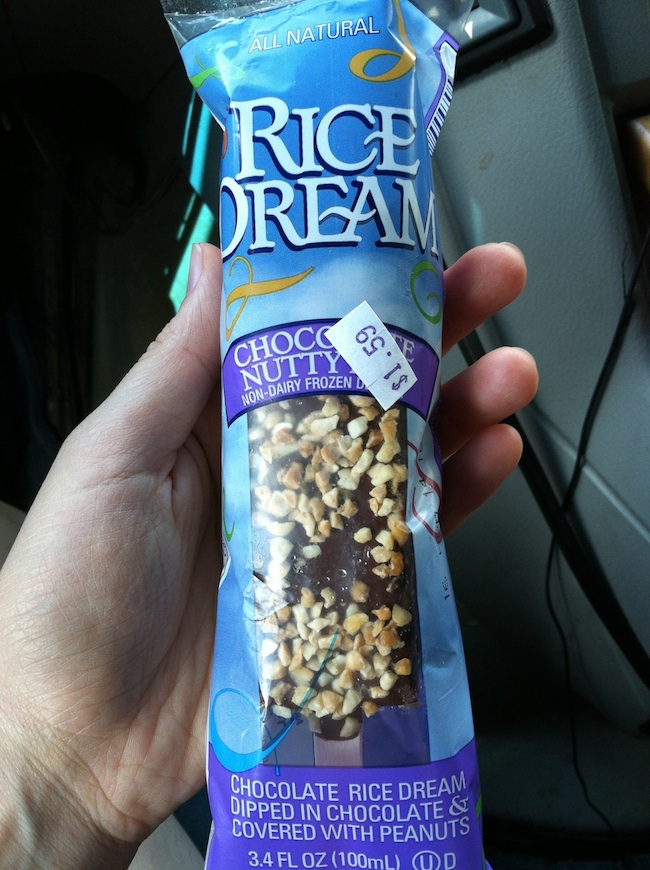 OkeyDokey then.. moving on to Something Better. Heh… no really, that’s the name of the next restaurant! :)

NOTE FROM PRESENT-ME: EeehrrMyGoodness you guys.. this is so frustrating! I was looking up this restaurant’s website so I could link to it and I’m completely confused as to if they’re still open or not. Their same-name website no longer works, Yelp! reports that they’ve closed (last review from May 2012), but their same-name Facebook page is active. The website that they link to via Facebook (Chew For Change) appears unrelated at first glance but then at the BOTTOM of the pages says, “Who we are: Something Better has created a solution…” Wait, so… is Something Better a product or a restaurant? Is the restaurant still operational? Oh and what’s that “better than meat” logo on the website? Is THAT a product?

Haha.. I sincerely get worked up over unclear marketing and branding. It’s more about realizing that they’re missing their true potential and reach. I just want them to thrive! And not to suck at marketing. :)

Okay. Rant over. Here’s a photo of what I ate at Something Better, around this time last year. I think it was a pizza. I don’t have any notes for this place. :/ 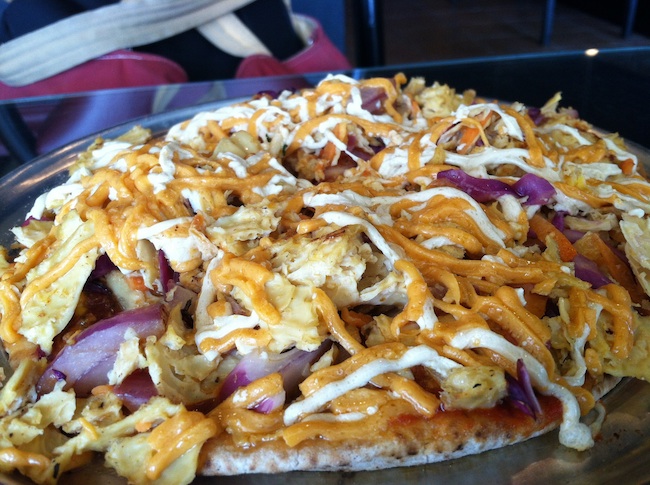 High Noon Cafe in Jackson, Mississippi turned out to be quite the hidden gem! Aside from the fact that it’s the only mostly-vegan establishment in the entire State, the food is fantastic! The Cafe is located just inside one of Jackon’s longest running natural foods store, Rainbow Co-Op – which was equally impressive!

After visiting with one of my cousins who lives nearby I enjoyed a delicious half-ginger, half-blueberry lemonade that totally rocked my world. I also had what I believe to be the best potato salad in the country. Yep, right there in Jackson, MS. Who knew?! Plus, the Cafe’s Harmony Bowl (steamed broccoli, carrots, cauliflower, edamame, and baked tofu served over long grain brown rice) with the Thai peanut sauce was fantastic! I mean, the peanut sauce itself – marvelous.

Needless today I was delightfully surprised to find such an awesome place Mississippi! :) 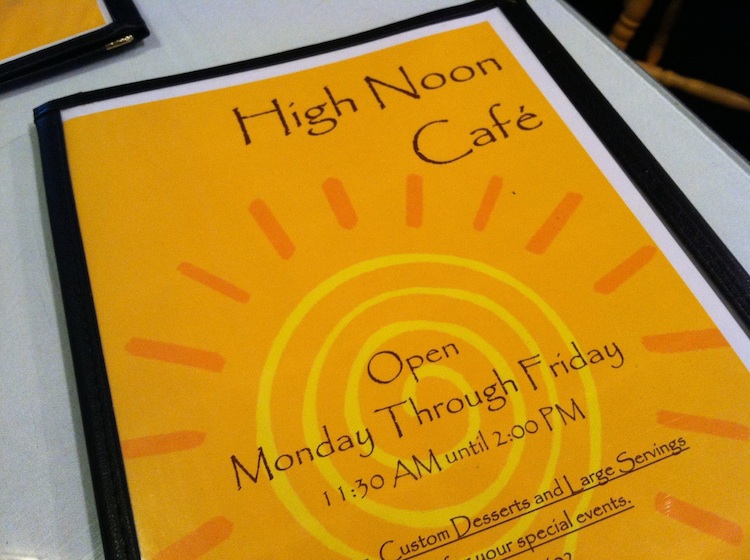 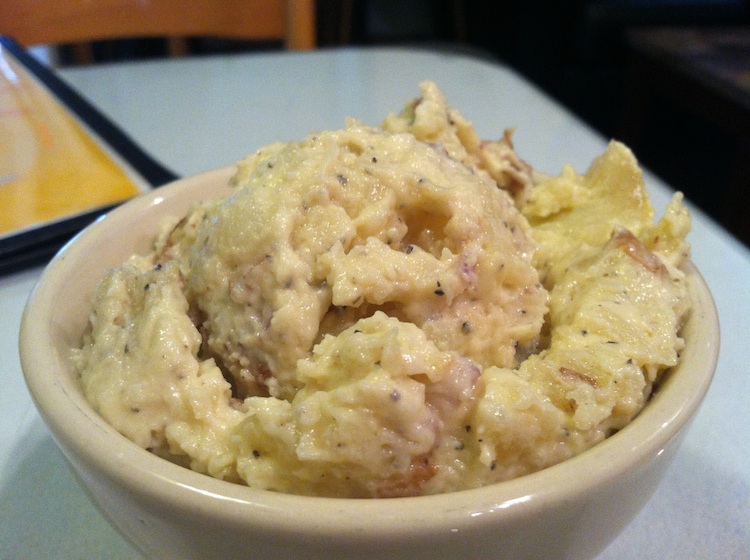 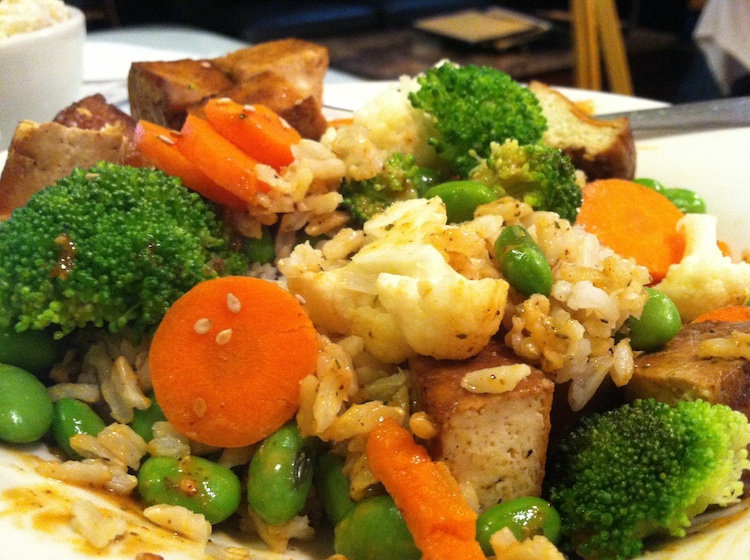 That makes two more Southeast States checked off the list! Next up, we’re heading to Louisiana and you bet your bippy we’ll be scopin’ out New Orleans, baby!!

31 Marketing Videos … and some dancing too

Just in Time for Mardi Gras – Vegan in New Orleans