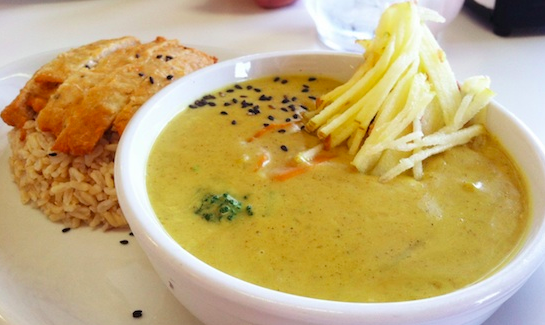 Throughout the few days that I was in Columbus I visited a some places that have awesome vegan food stuffs. One of the more hidden finds was Portia’s Creations (100% vegan): organic, raw, vegan, and gluten-free pre-packaged foods that can be found in health food stores throughout the city. I found some at the Clintonville Community Market, a natural foods coop. I had actually met Portia at the Doo Dah Parade a few days prior. She was dressed as a strawberry, at the parade. You can see her in at least one of the pics from the previous post. According to the companies Facebook page:

Portia’s Creations provides vegan, organic, raw, gluten-free, seasonal, and/or local foods when available, using fluoride- and chlorine-free water in our recipes and production. Presently you can find my foods at the Clintonville Community Co-op on Calumet and Crestview, and at the summer Clintonville Farmer’s Market (one block north of North Broadway on High St.). Enjoy my creations knowing that they’re made with intention and love to satisfy your taste buds while offering your body what it needs to thrive. 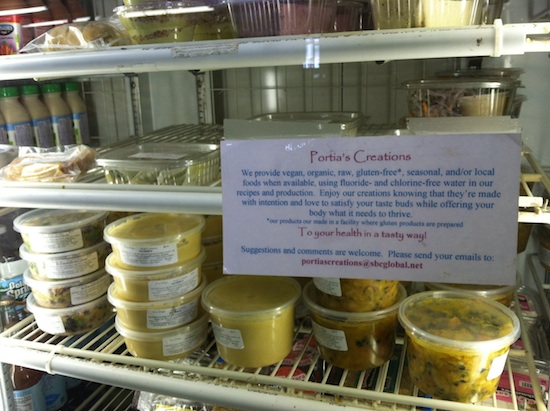 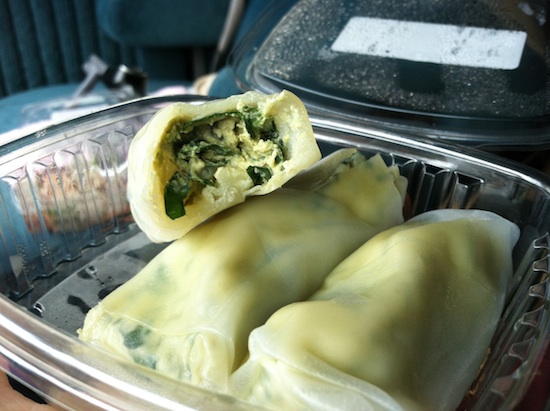 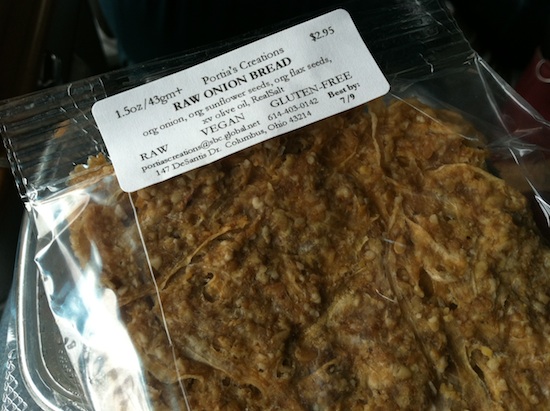 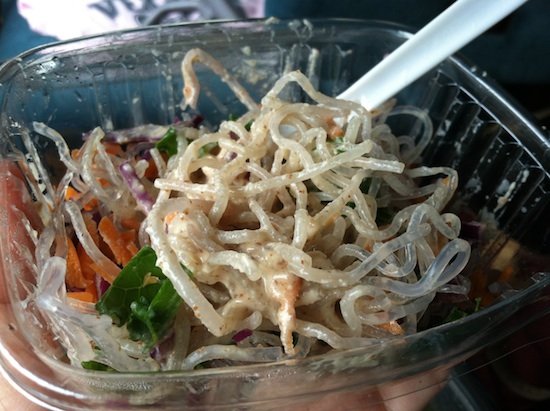 Karen and Brodi, the couple who let me stay at their place all week, took me out for an awesome meal at the Banana Leaf. This place kicks major tooshie! They have a bunch of gluten-free foods, most of the menu is vegan, and they’ve got a few vegetarian options. Every Tuesday through Thursday Banana Leaf offers an all-you-can-eat lunch buffet. We opted for the buffet. :)

I don’t recall what each item is named (Karen, do you know what some of this stuff is?) but it was all very, very, very delicious!! So here are some pics. If you get a chance to check it out at least you’ll have a visual reference. But I’m fairly certain you can’t go wrong with any of their vegan options. Everything is clearly labeled on the menu and at the buffet station, and it’s all very good. Some of the best Indian Cuisine I’ve ever had, for sure. 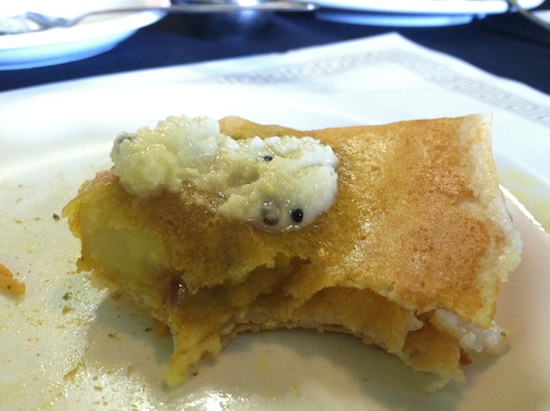 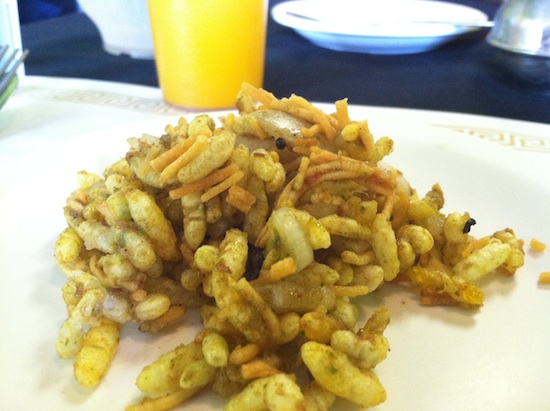 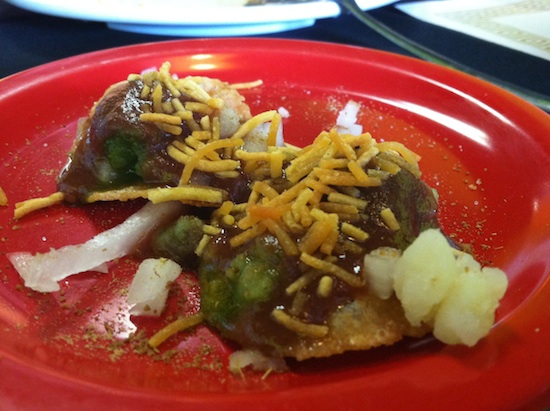 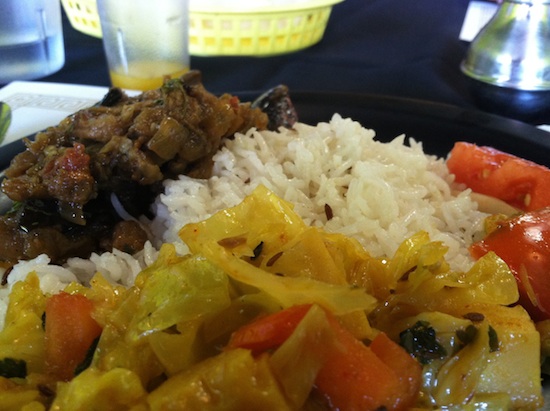 On another evening a group of us got together to have dinner at the nearby Loving Hut. Technically it’s located in Reynoldsburg, but it’s close enough to Columbus that it’s worth including in this post.

This is one of the best Loving Hut’s I’ve been to so far. It’s super clean, the service is great, and the food is phenomenal. I love the vegan food facts that are included throughout the menu too (as is the case with most Loving Huts). Nice! 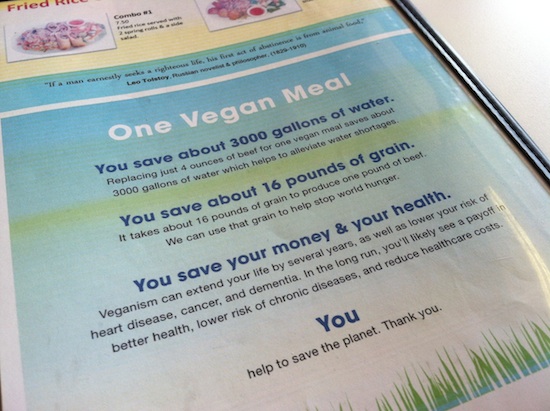 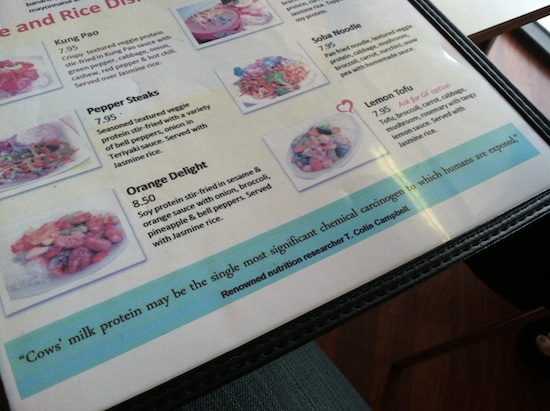 I’m so bad at taking foodie notes when I’m dining out with others. I get so used to eating alone, and using that time to take notes and pics, that when I’m lucky enough to have company I just want to chat and be present. Crazy, I know! ;) So yes, this is why yet again I don’t recall the names of the dishes below. Obviously we’ve got a couple of soups, a faux chicken cutlet type side, a sammy and a salad. But honestly, everything I tried was so over the top delicious that you can’t go wrong at this Loving Hut. I was sincerely impressed. 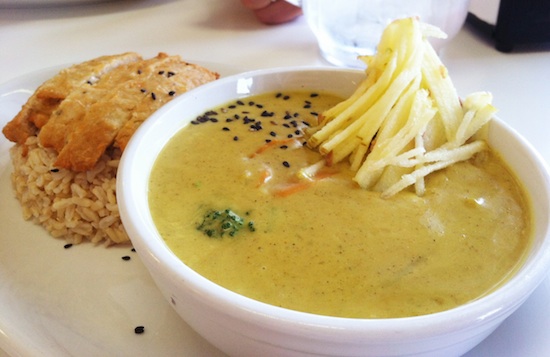 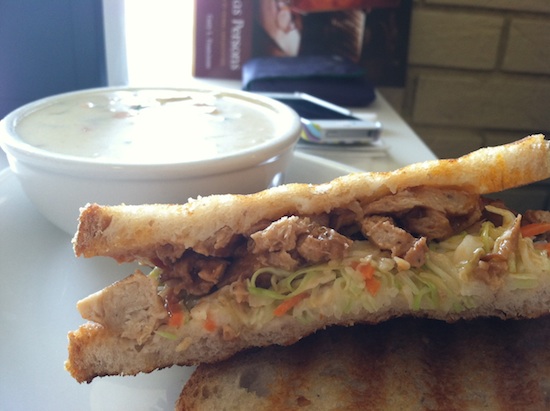 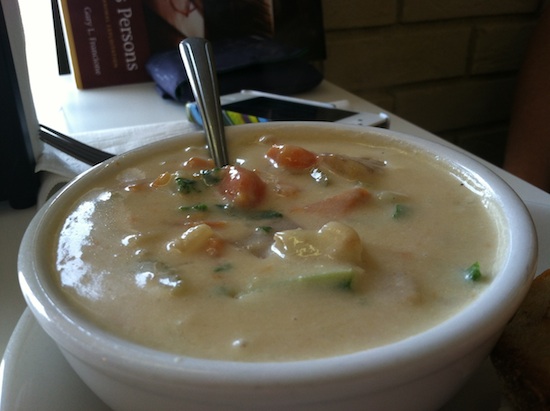 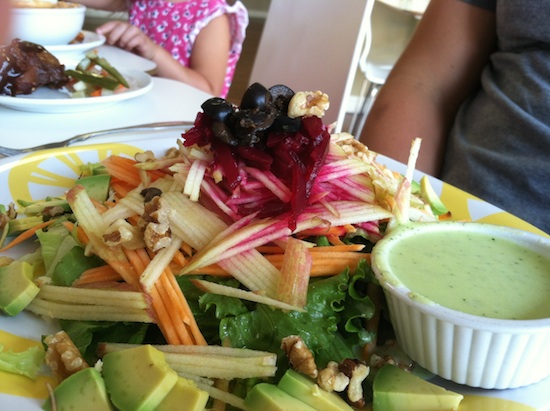 These are the people who made my stay in Columbus absolutely incredible. I did meet a lot of amazing people throughout the week, and at the Doo Dah Parade of course, but I grew closest to Karen and Cindy, and their studs Brodi and Chevy. Karen’s sons, Ayden and Koda aren’t pictured but I did get to meet them and they’re pretty rad kids. Cindy and Chev’s girls, Penny and Laney were out to eat with us on this night. 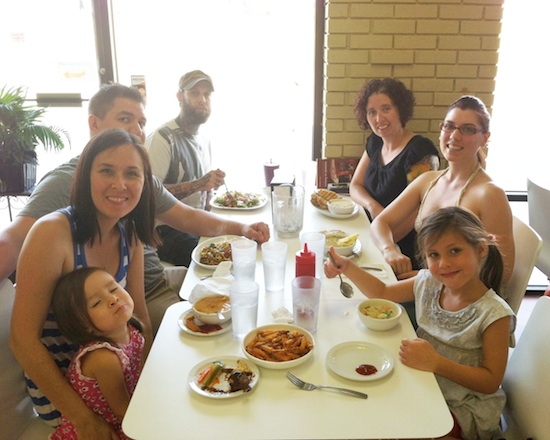 Laney and Penny had also made some lovely artwork for me. So sweet!! Thank you, ladies!! :) 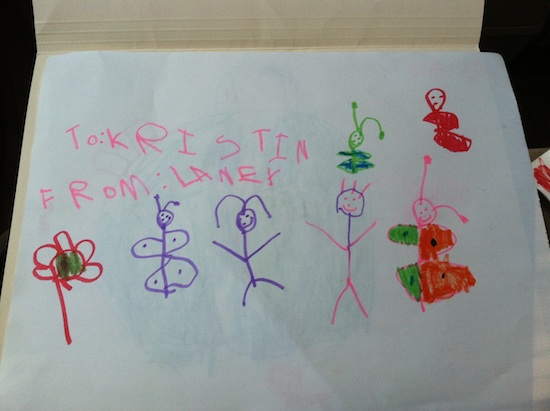 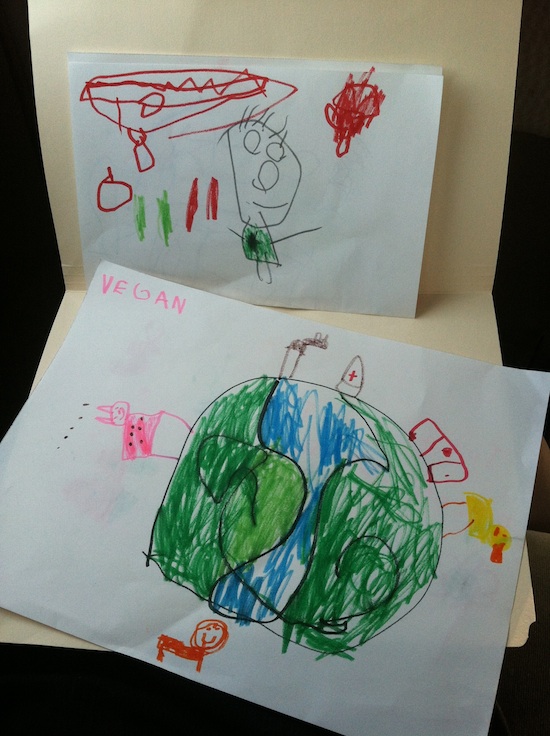 I was fortunate to be around for Groovy Spoon‘s vegan ice cream night. Om nom nom! 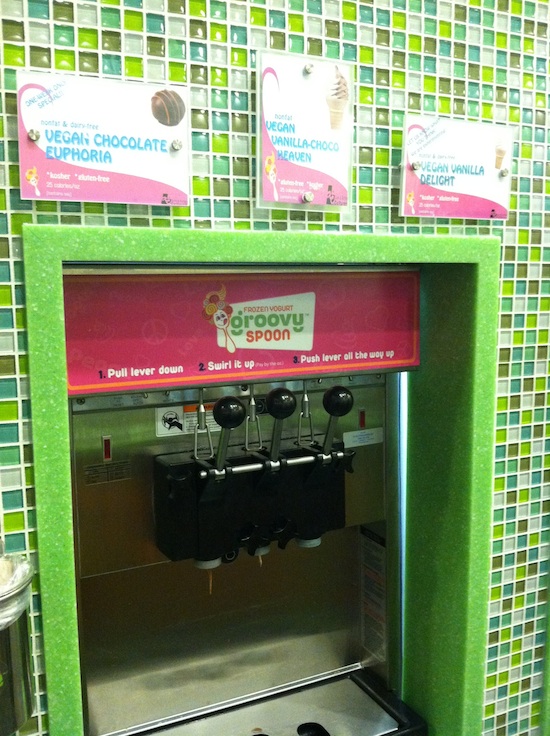 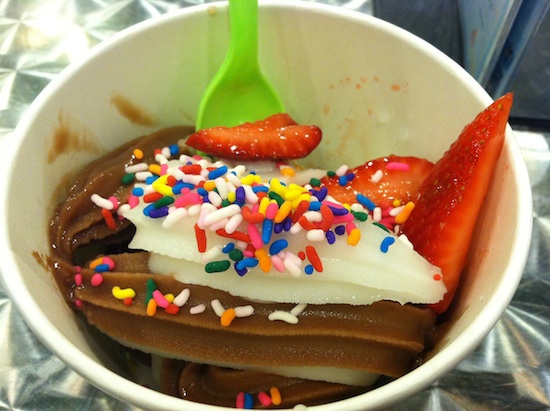 Of course, I cannot conclude Columbus without talking about the one and only all-vegan bakery! This place totally rocks – not only is everything vegan but they offer a variety of gluten-free goodies, and they do not use transfats or food dyes. I only tried a couple of treats from this bakery and everything was absolutely magnificent. Especially those cinnamon rolls. Yowzahs!

I sat down to chat with Jennie, the founder and owner of Pattycake Bakery to learn a bit about the Bakery’s beginnings and Jennie’s love of sweets. 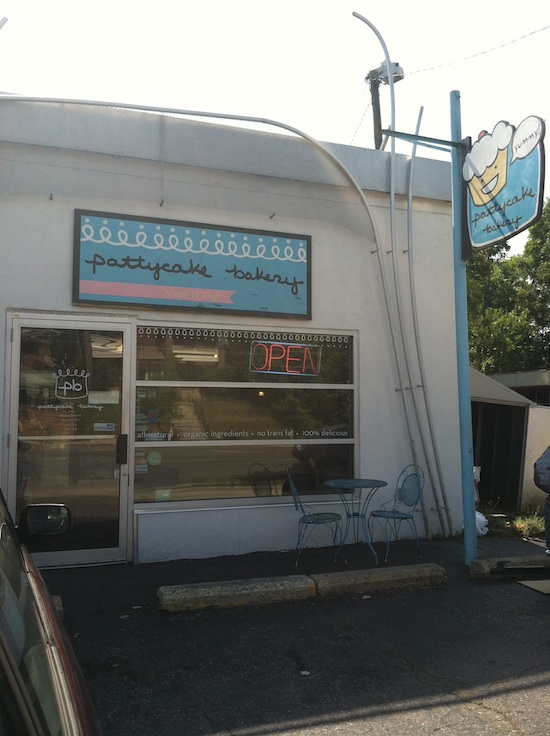 While most of us were getting stomach aches over the “baked” sweets that came out of our Easy Bake Ovens (maybe that was just me), Jennie was making chocolate soufflet at the age of nine. She’s had a long history of baking and creating sweets that were more ethical and healthier than your standard fare.

Jennie became veg when she was seventeen years old and went off to college where she began baking even more since finding vegan treats was something of a challenge. She’d often bring her baked goods to potlucks and other events where friends, family, and strangers would rave about them and on more than one occasion, encouraged her to start her own bakery though she never gave it serious consideration. 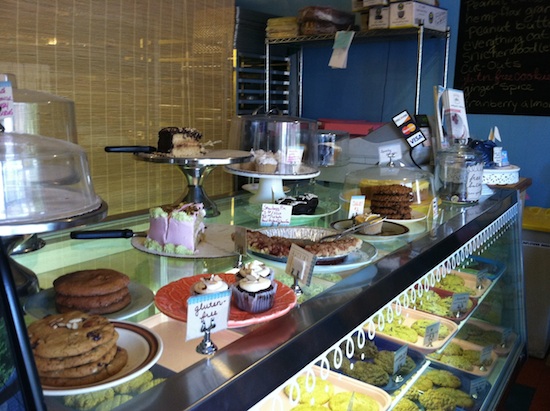 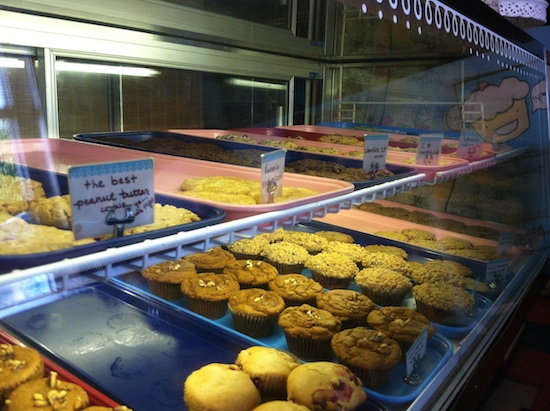 Fresh out of college and with a new bundle of joy, Jennie was thinking about ways in which she could earn money to pay off student loans and raise a family. In college she had studied gender equality and oppression and was planning to continue on to a Doctorate degree so she could teach and write on the subject. One afternoon while she was sitting in a local coffee shop contemplating future plans she noted that they didn’t have any vegan baked goods to snack on. It occurred to her then that maybe she could start a small side business that provided vegan baked goods to shops, like this local coffeehouse chain.

After a few internal debates Jennie decided she would at least give it try. She began working with a local coop and after she nailed down what the coop’s customers were looking for, her baked goods were flying off shelves. She then revisited the idea of selling to coffee shops and it just so happened that the one coffee chain she had in mind was, at that exact time, looking for new baked goods to carry.

Before long Jennie found herself baking out of her home from 7AM to 12AM , half of her house was taken over by this small side project, and she realized that she’d soon need her own space. Fast forward nine years and Jennie has created a booming vegan baked goods business. 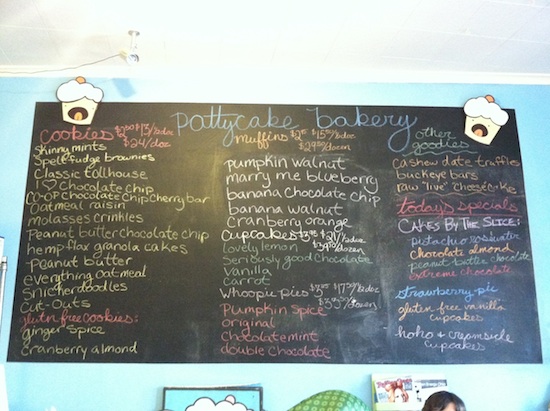 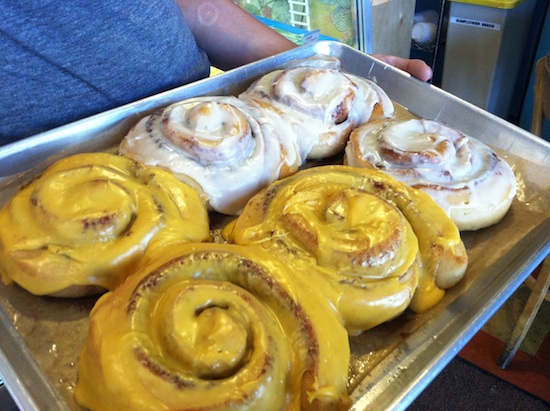 Today Pattycake Bakery is transforming into a coop run bakery that focuses on the ethical and eco-friendly aspects of business. They make their deliveries by bicycle and recently won the Green Packaging of The Year Award. All of their containers are entirely compostable and locally produced.

Jennie has other big news too – she’s working on plans to open the space directly next to Pattycake Bakery, which will be a vegan cafe with a bunch of raw options. So cool!

Jennie, thank you so much for taking the time to chat with me and you can bet I’ll stop in again, in the near the future! :) Oh, and please say hello to Cate for me (friends, follower her delicious Instagram posts –> @cupcatesthebest). She and I had a lovely conversation just before I left that day. :)

The last morning before I left I had a lovely brunch at Hal & Al’s with Cindy. Here’s a shot of some awesome french toast, topped with cinnamon, sugar, and soy butter with a side of vegan sausage rounds. MmmmmYUM. 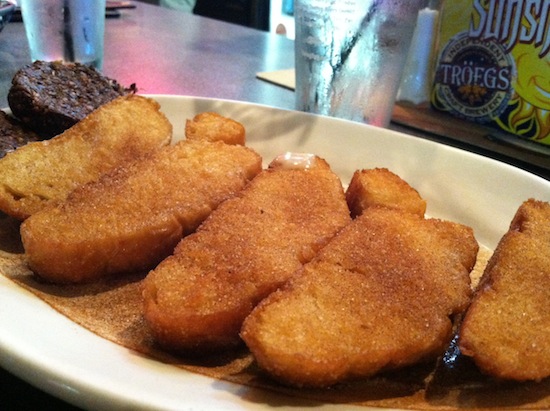 Welp. That’ll do it for Columbus, OH.

Thanks so much to Karen (AKA Heathen Vegan Mamma) and Brodi, Cindy and Chev, John and Simon, Eriyah, Jeff, and the rest of the Columbus, OH vegan crew for making my week in your city super freakin’ awesome. I had a blast and I so look forward to visiting again soon. xo

One more shout out to Karen’s other baby, Grazie! I’m not kidding when I tell you that this dog LOVES playing dress up. She’s a huge fan of this outfit in particular. So cute. :) 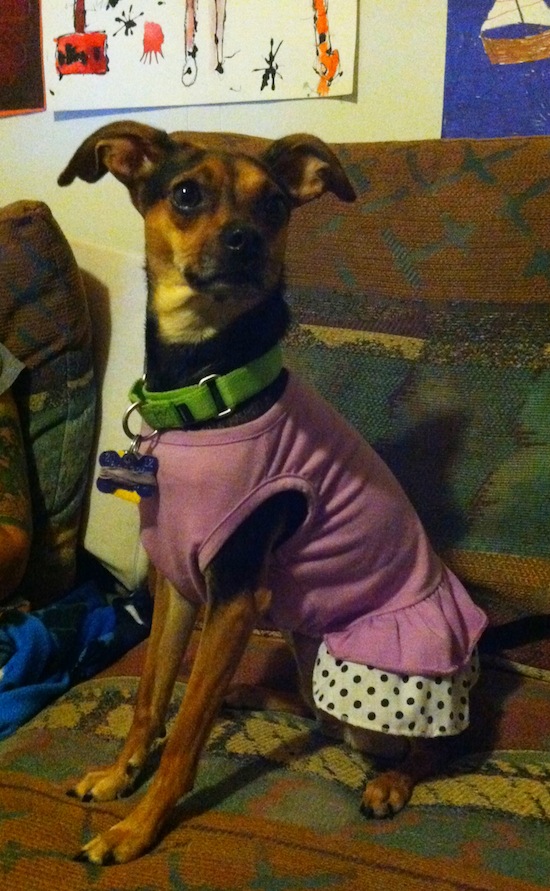 I’ve got a few more restaurants to cover in Ohio and then it’s on to Michigan. Thank you so much for reading along, everyone! :)

NEW DIARY-STYLE POSTS + Lunch with a day-old friend and arriving in Tulsa, OK! 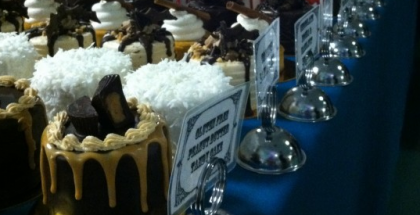