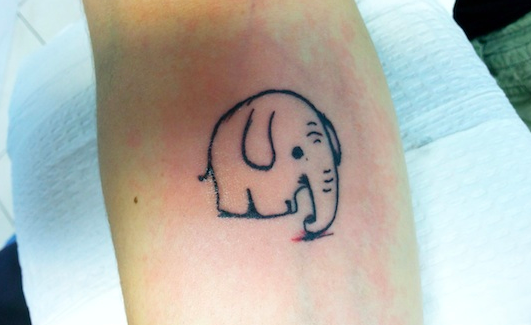 For nearly an entire week Andrew Johnson had been letting me sleep in his bed. Heeeee was out of towwwn, silly. Andrew, also known as the Vegan Giant (he’s crazy tall. No, for real. like.. SUPER tall), runs a blog called Jolly Green’s Kitchen, is a vegan athlete, an avid cook, and was also a wtfveganfood volunteer PR Coordinator for a while, before he got silly busy working something like, ten jobs. ;) Great guy! When he returned from a trip on the east coast we met up for dinner at Simply Thai.

Simply Thai is not vegetarian or vegan but they offer a large number of veg options. By the time Andrew was back in town I was running low on veg eateries so we decided to have dinner here. I’ve been told they have THE best Pad Thai in town. Somehow we ordered everything BUT the Pad Thai. Ha!

We had the Crispy Tofu and Tamarind TVP for appetizers, which were quite good. For dinner I had the Massaman Curry – coconut milk, chili, lemongrass, curry powder, potato, carrot, and spices with mock chicken. Andrew had the Pineapple Fried Rice – fried rice with pineapple, cashews, raisins, and vegetables served in….. HALF OF A PINEAPPLE! Everything was delicious and I ate way too much. 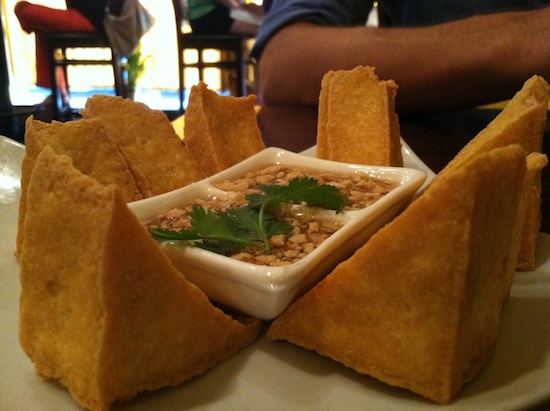 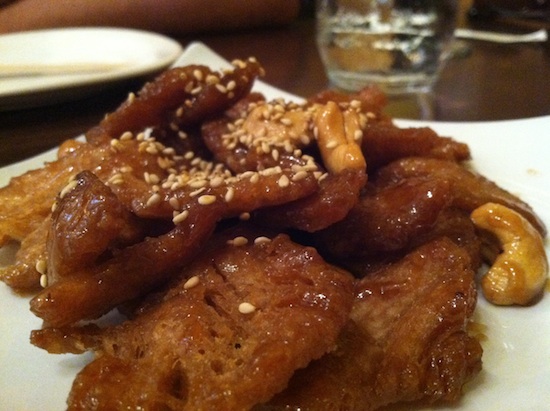 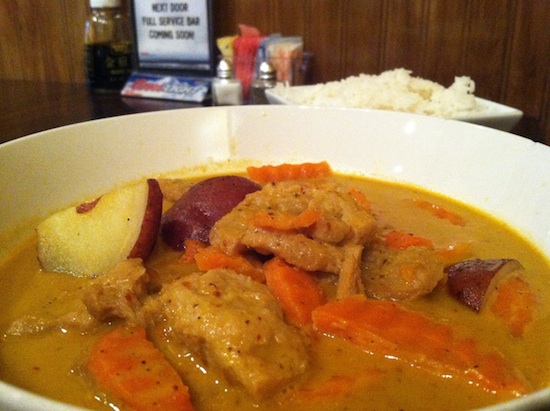 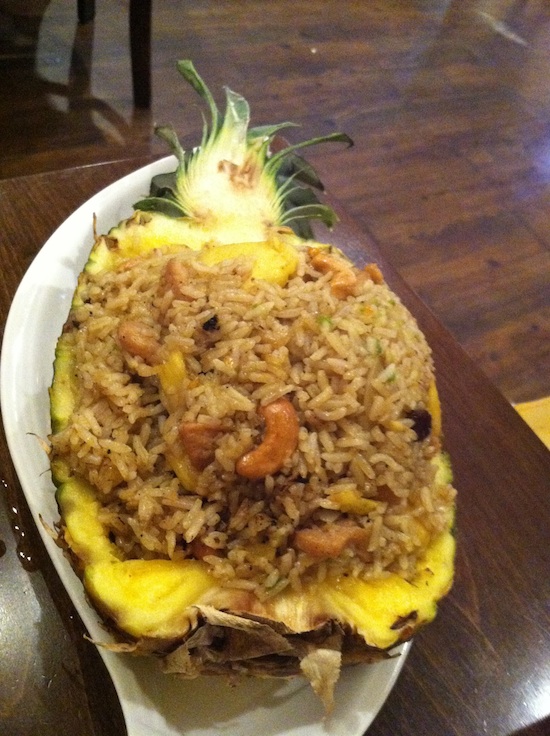 So then I got a tattoo.

It took me about two years to talk myself into getting my very first tattoo, which you can read all about here. I decided on the vegan “V” and got it done at a Chicago shop, in August 2010.  I never really thought about getting anymore tattoos until the last few months where I’ve found that I tend to enjoy looking up different styles of tattoo art, and then found myself looking up shops in nearly every city I visit…maybe since Florida… to see if there is an artist who catches my eye. Anyway, around the time that this new, mild obsession began to develop I knew that I wanted to get my second tattoo. So I guess the timing was right when I sent out the following tweet, while sitting at Highland Coffee:

Almost immediately, and to my surprise, I recieved a response:

So here’s the thing about me – I **bleeping** LOVE social media. I love that it’s basically free advertising for businesses, I love what it can do for a business, and most of all I love when businesses use it correctly in order to grow their customer/client base.

My job prior to this trip was as a social media consultant. I lived and loved to help businesses understand the benefits of and how to use social media tools like Facebook and Twitter to create more brand awareness. Also, since my road trip is focused on restaurants I’ve noticed that 90% of them (veagn or not) have little-to-no online presence and/or social media know-now. Therefore, when I stumble upon a restaurant or business that is utilizing social media in real and effective ways, I kind of go nuts (in a good way).

Tattoo Charlie’s is a perfect example of a business that properly used Twitter to snag a new client (me!). At this point I was nearing the end of my stay in Louisville and despite having considered getting a new tattoo while there I hadn’t committed to a shop, or even a design that I wanted. But this one tweet from Tattoo Charlie’s impressed me so much that I made it a point to get a piece done by them before I left.

This is what makes Tattoo Charlie’s communication with me so wonderful: for those of you who are familiar with Twitter you know that hashtags (#) are used to create searchable “keywords.” This makes one’s tweet more visible via Google, and particularly for those who are looking for those specific keywords. TweetChat and TwitterFall are prime examples of websites that use hashtags to communicate and/or search for specific words. But # are searchable via Twitter.com, and through other Twitter management platforms as well. This is valuable to businesses, like Tattoo Charlie’s, who may be on the look out for people who are talking about tattoos or Louisville, or whatever they want to track. I have no idea how or why my tweet showed up on Tattoo Charlie’s radar but I could guess that they were keeping an eye out for relavent keywords (like “tattoo” and “Louisville”), in order to start conversations and develop relationships with potential clients.

Not only that but they initiated conversation by using words that spoke directly to me: tattoos, quality, cruelty-free. To me this meant that they weren’t just throwing out a random tweet. They read my profile (at the very least, if not also check out my website) and made an effort to use terminology that spoke to my trigger points. Well. Done.

Can you tell I like this stuff? Just a little. ;)

I ended up tweeting back and forth with Tattoo Charlie’s for a while and then moved to email where I learned that the owner of the shop, and his family, are vegan. What are the chances and how cool is that?!

After some internal debate on what I wanted to get I decided on one of my favorite images from the Herbivore Clothing Company – the “I’m vegan & I love you” elephant. I’ve had the t-shirt for years and always liked this image. 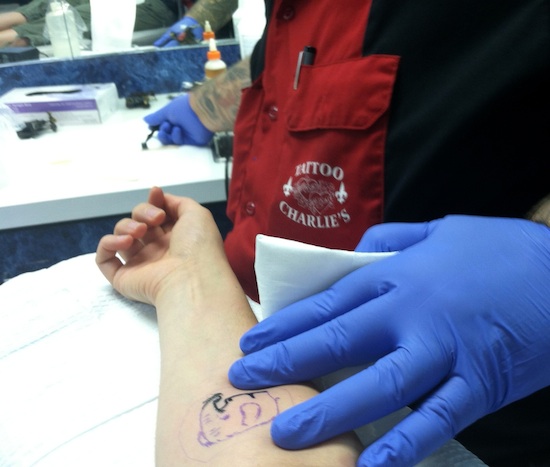 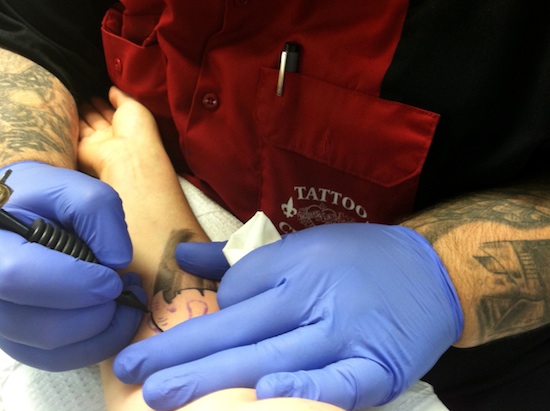 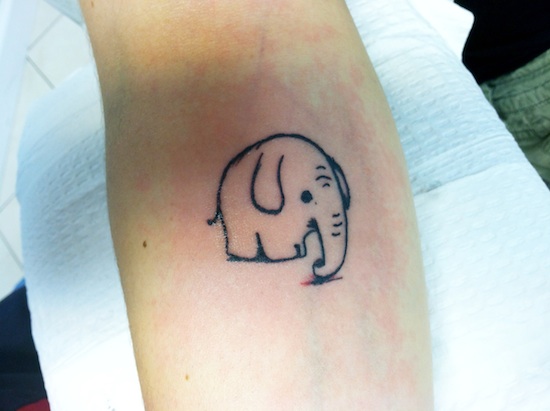 Thanks so much to Buddy, Dave, and the crew at Tattoo Charlie’s for being so accomodating and friendly! :)

My last day in Louisville equated to boat loads of sweets and the celebration of National Vegan Pizza Day (June 30th). Perfecto!

I stopped by two different bakeries that are known for carrying a variety of vegan treats: Sweet Surrender and Annie May’s.

Here we’ve got a strawberry cupcake, a chocolate cupcake, and a piece of chocolate peanut butter pie from Sweet Surrender. This bakery specialized in “alternative diets.” They carry gluten-free, dairy-free, egg-free, and sugar-free cakes and pies. Not always one in the same so just be sure to ask about the vegan options. 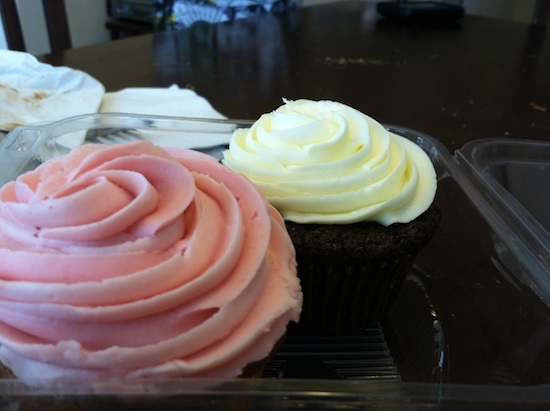 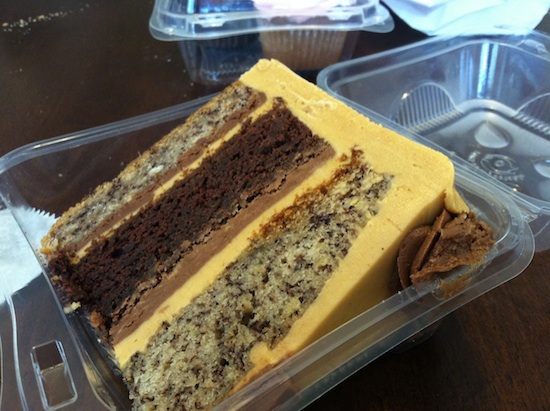 Similarly (but not entirely), Annie May’s specializes in those who have food allergies. Therefore, they carry baked goods that are FREE of gluten, soy, peanuts, and tree nuts. According to their website, “Upon request, most items can be made without egg and/or dairy products.”

I like their tipping cups. :) Below the cups picture we’ve got an oatmeal pie cookie and a super cookie sandwich. Yummmmmm!!! I had also tried a small scoop of their vegan mocha chip ice cream and it was wonderful. 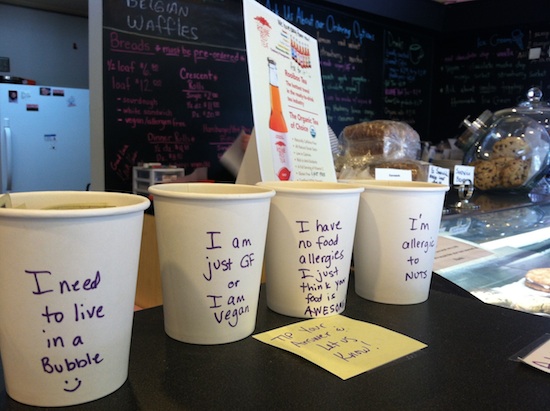 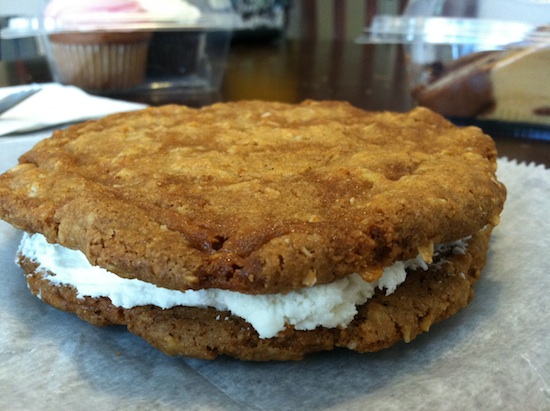 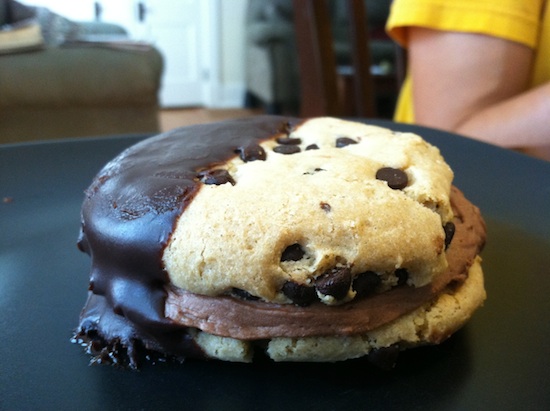 No, I did not eat all of this. I had a bite of a couple of things and left all the rest behind for Andrew. Haha. It’s the least I could do to thank him for letting me crash at his place. :)

Before Andrew and I indulged in the aforementioned sweets we shared a pizza for lunch, in celebration of National Vegan Pizza Day. This was the first time I’ve had potato on pizza. It was pretty awesome! 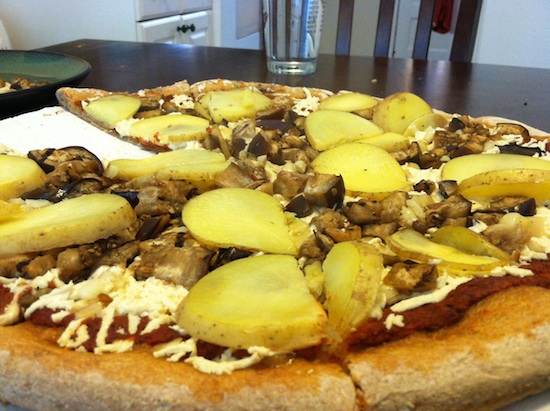 Before I leave Louisville behind I want to give a shout out to Sam Hartman – a local vegan who has been an avid supporter of Will Travel For Vegan Food since its inception. Sam had contacted me waaay back at the beginning of my trip, before I was even on the road, and conducted an in-depth interview with me and my then-travel buddy, Ethan. Click here to check it out. He even gave us a shout out once we were finally on the road, up and running. So cool! :)

Sam has an excellent blog called The Nail That Sticks Up which focuses on animals rights, veganism, fitness, sustainability, and other cool, related topics. He also runs the Louisville Vegetarian Initiative, is a vegan athlete, and a musician. From what I can tell Sam is the “it” vegan guy in Louisville who seems to know where to find all of the vegan hot spots, the vegan hidden spots, and everyone seems to know who he is. Obviously, Sam makes an excellent vegan tour guide!

I love meeting people who I could talk to for days about social media, passive income, blogging, and of course, veganism. It’s a rare treat to connect with people like Sam and I’m extremely grateful to have spent some time with him while I was in Louisville.

Sam, thanks so much for your continued support and all your help over the duration of my trip!! And thanks again to Andrew Johnson for letting me crash at your place, taking me out for meals, and helping with wtfvf public relations. These are two awesome guys – definitely look them up if you’re ever in Louisville!

Thanks for reading along, everyone. Ohio is next! :D 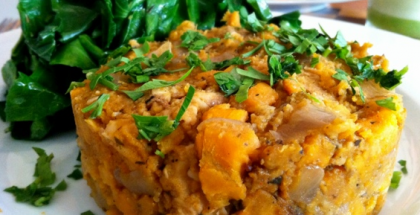 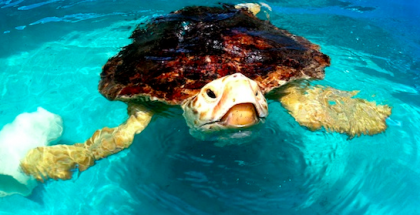